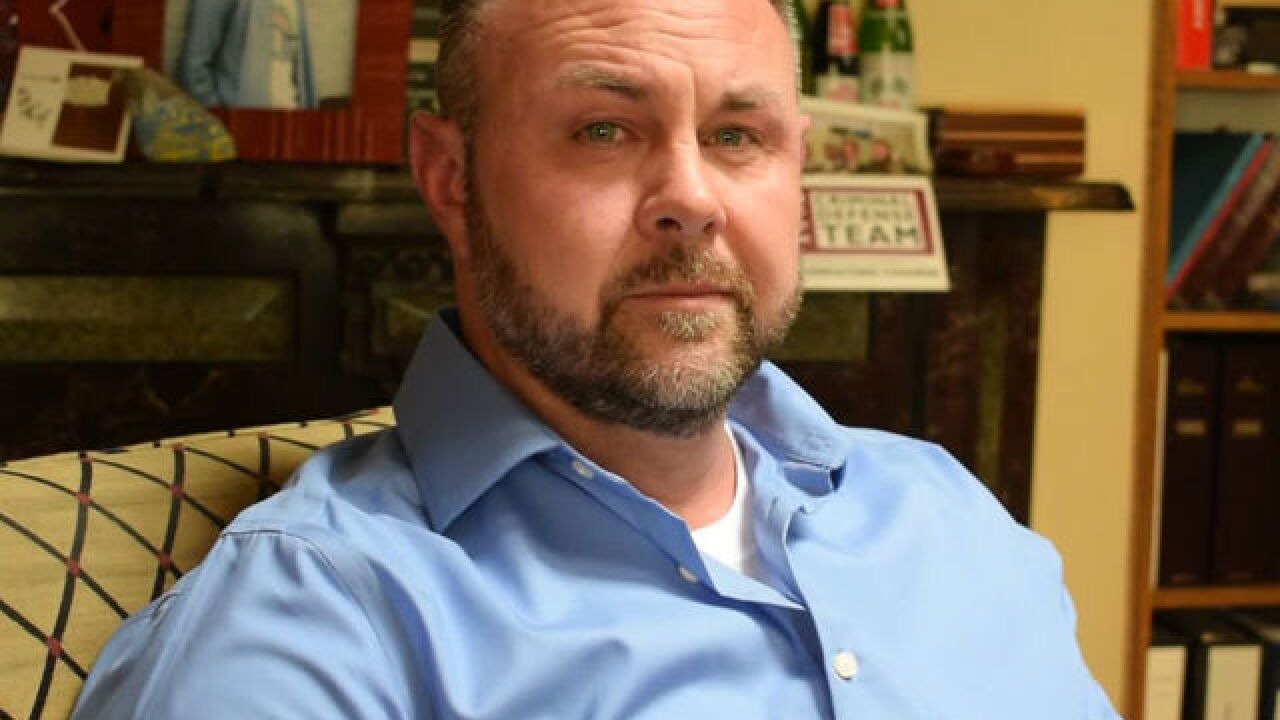 INDIANAPOLIS -- A Greenwood man says his ex-wife framed him for the kidnapping of a 2-year-old girl a day before he was scheduled to argue for her custody in court.

On March 26, Indianapolis police received a report of a residential entry and kidnapping at the Crestwood Village Apartments on the east side.

The caller, Cori Wood, told police her ex-husband, Craig Stumpf, 41, had entered the residence without permission and taken her 2-year-old niece Remington, who lives with her.

A short time later, Stumpf received a knock on his door from Greenwood police.

IMPD officers arrived 30 minutes later, and told Stumpf's youngest daughter Alyssa and 2-year-old Remington – who was at his house – to go upstairs and play.

"Alyssa started crying. She was very upset," Stumpf said. "She knew something was going on. It was the start of a very bad time."

Police placed Stumpf in handcuffs and took him to the Marion County Jail – where he sat for three days before he was able to bail out.

In the meantime, he missed work and a scheduled guardianship hearing for Remington, who he has been trying to adopt.

"I was just trying to question why all this was going on," Stumpf said. "Why this was happening. I knew I hadn't done anything wrong. I wasn't sure what the outcome would be, because they were very serious charges against me at that point."

When he was finally released, Stumpf learned he'd been fired from his job over the charges against him: burglary, kidnapping and breaking and entering.

The problem, Stumpf said, is that none of the charges were true.

Stumpf and his ex-wife Wood divorced in 2015. During a period in which they were reconciled, Wood's 2-year-old niece Remington lived with them.

After they separated for good, Stumpf says he felt called to adopt Remington so she could have the same life as his own three biological children.

Before police arrived on his doorstep that Sunday night, Stumpf felt like that dream was close to coming true.

"I had spoken with my attorney. I'd also had permission from the biological mom of Remington to legally adopt her," Stumpf said. "So I had a real good feeling that, here soon, I was going to be able to take in Remington and father her like I do my other three girls and try to provide a good life for her."

The very next day, Stumpf and Wood were scheduled for a court appearance to argue for Remington's guardianship. As he sat in jail, Stumpf said he knew it was no coincidence.

"I knew at that point … knowing that the hearing was coming the next day, that I was set up to make sure I'd miss the hearing and possibly do time – a lot of time in prison – for something I didn't do," Stumpf said. "To keep me away from trying to give the little girl, Remington, a better life. To keep me out of the picture."

In her statement to police, Wood said Stumpf entered her home without permission around 8 p.m., took Remington over her objections and left.

Stumpf's attorney Andy Baldwin, of the Criminal Defense Team of Baldwin, Kyle and Kamish, said that account was fabricated by Wood.

"She set him up," Baldwin said. "She called him and said, 'Hey, why don't you spend some time with the girl?' She did this so that he would go to jail the day right before the guardianship hearing to improve her position."

After Stumpf was released from jail, Baldwin's team was able to obtain surveillance video from a McDonald's on Southport road showing that, in fact, Wood and Stumpf had met at the restaurant to exchange Remington around 6:30 p.m. on March 26. Surveillance video shows Craig Stumpf and his ex-wife amicably exchanging Remington around 6:30 p.m. on March 26 at a Southport McDonald's.

Baldwin also retrieved GPS information from Stumpf's truck – the same one shown in the McDonald's surveillance video – showing that he had traveled to the McDonald's and then straight home. He had not, Baldwin said, gone to the east side of Indianapolis to commit a kidnapping.

Stumpf's defense team obtained statements from the mother of his three biological children and from his parents – who all saw Remington with him at his house prior to 8 p.m.

But the strongest piece of evidence, Baldwin said, was a statement under oath by Wood's sister Ashley Adams – who happens to be Remington's biological mother – that Wood had made up the whole story.

"The most irrefutable moment where we knew for an absolute fact that Craig had been telling us the truth the whole way was when his ex-wife's sister came forward under oath and said that it had all been a lie and that Cori, the accuser, had confessed to her that, 'Hey, I made this whole thing up because there was a guardianship hearing the next day and I didn't want Craig to get guardianship of this little girl named Remington,'" Baldwin said. "The sister even felt badly. She said, I don't want to get my sister in trouble, but this is what the truth is. I mean, we knew before then, but that crystallized it pretty clearly." An excerpt from the deposition of Ashley Adams on April 13.

Marion County prosecutors filed a motion to dismiss all charges against Stumpf five days after the deposition, citing "evidentiary problems."

'A Lack of Curiosity'

As a result of the allegations against him, Stumpf spent three days in the Marion County Jail. He was forced to pay for bail and an attorney to represent him. He lost his job. And, he says, he felt like a pariah in his own community.

"I'd been at my job for a couple of years, and I did well for me and my girls there. I was immediately released from that," Stumpf said. "So I was scared that I wasn't going to be able to find another place of employment with those kind of charges pending over my name. Obviously, it stressed out all of my children to where they've been writing me notes to 'be strong' and 'don’t quit.' It's been hard. It's been real hard."

Stumpf says his daughters' support is what has sustained him since his arrest.

"I have very good kids. I'm very thankful," Stumpf said. "And yes, I love them to pieces. Remi, they all love her, and my parents do as well. It was a good fit to have her in our life."

Baldwin praised the Marion County Prosecutor's Office for expediting the case once all of the evidence was presented to them. He was less charitable toward the police officers and detectives who investigated the case to begin with, saying they "lacked curiosity."

"Police are human beings and they make mistakes," Baldwin said. "Still, the difference is that their mistakes can incredibly impact a life and they did an incredibly poor job here. I would be surprised if even they didn't admit that. Had they listened to Craig, had they taken the time to listen to the evidence that he would have led them to, like he led us to, this probably wouldn't have happened."

RTV6 reached out to IMPD about the investigation in the case and received the following statement:

"The Greenwood PD arrested Mr. Stumpf on information that a felony level crime had occurred. Responding officers received information from the ex-wife alleging that a kidnapping and residential entry had just occurred. Felony level allegations in Indiana require probable cause and to initiate an arrest; officers must have apparent facts discovered through logical inquiry that would lead a reasonably intelligent and prudent person to believe that an accused person has committed a crime. Probable cause does not equal absolute certainty. This is why we often refer to charges immediately following an arrest 'preliminary' because they are not final until a review of the MCPO.

Often this is the unfortunate and difficult decision officers have to make on these types of runs. The detective on the case had attempted to talk with Mr. Stumpf (3/28), but he had already been released from APC before she could speak with him. She also called and left a message for Mr. Stumpf, but the case was under a 72-hour time limit to present case findings to the MCPO. The detective screened the case with the MCPO (3/28), and charges were filed.

We are sorry that Mr. Stumpf has been inconvenienced it truly is an unfortunate set of circumstances that is the fault of the ex-wife and not the police (officers and investigators). Officers responded and when presented with a set of articulable facts that at the time were not challenged made the appropriate decision."

Stumpf said he just wishes police would have allowed him to give his side of events before placing him in handcuffs.

"I had guardianship papers from Remington's biological mom that were signed, dated and notarized by her. I had them from the father on the birth certificate that he signed, dated and notarized saying I had full guardianship of Remington," Stumpf said. "I wish that the detective, once the report was made, would have given me five minutes to tell what I was doing the entire evening. I mean, they could have asked the girls' mom. They could have asked my parents. They could have called McDonald's and checked the surveillance tape. But none of that was taken into consideration. I wasn't allowed to say anything."

The Marion County Prosecutor's Office declined to comment on whether it intended to pursue charges of false reporting in the case.

Wood also turned down repeated offers to be interviewed for this story, saying she "will be happy to put this behind us."