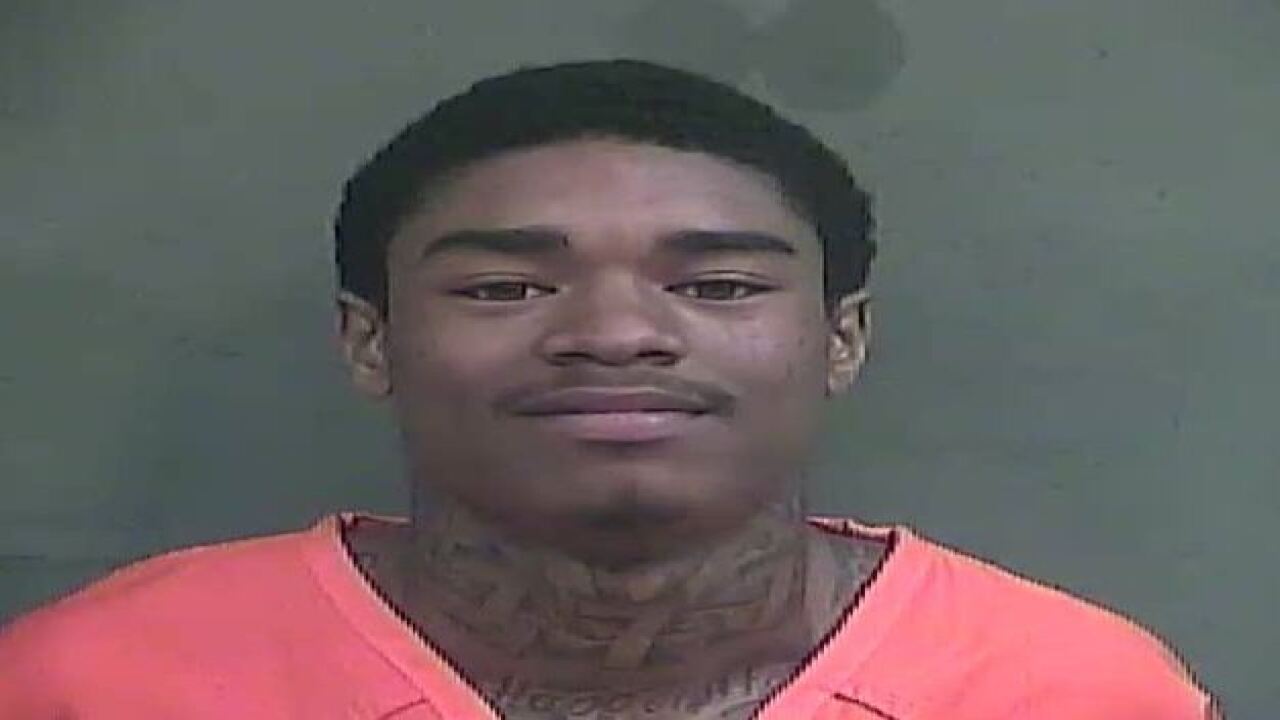 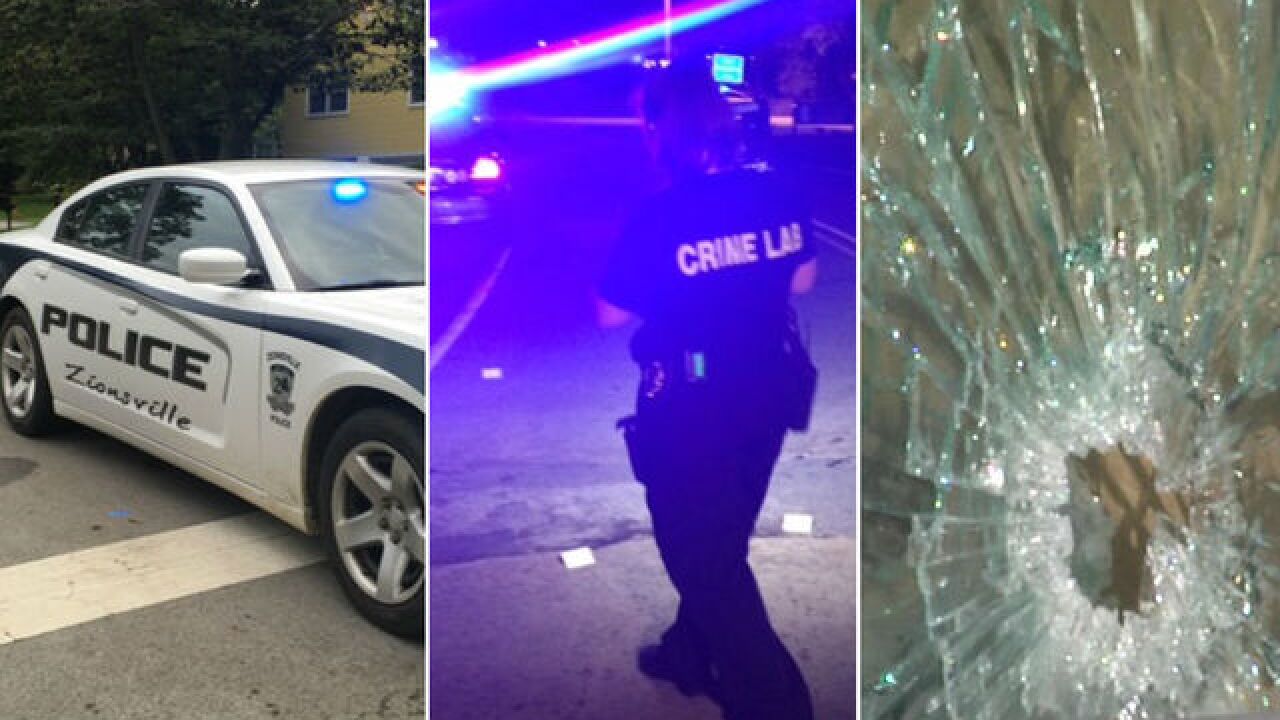 INDINAPOLIS -- Nearly a month of searching for the person responsible for shooting up two IMPD headquarters came to a dramatic close Monday with a SWAT standoff  on the northeast side -- and murder charges in Boone County.

Damoine Wilcoxson, 21, of Indianapolis, allegedly fired multiple shots at IMPD officers attempting to serve a warrant for his arrest. He then barricaded himself inside an apartment with his infant child. At the same time, Boone County prosecutors were filing murder charges against Wilcoxson accusing him of fatally shooting John A. Clements at his home in Zionsville on September 28.

Wilcoxson was eventually taken into custody without further incident.

Below, find the timeline of events prosecutors say connect Wilcoxson to a murder in Zionsville and dozens of rifle rounds fired at two IMPD buildings:

Neighbors tell police they saw a white Chevrolet Impala drive past John Clements' home on Terrace Drive in Zionsville. The Impala reportedly rounded the cul-de-sac and then stopped momentarily in the center. It then drove directly into Clements' driveway, where Clements was returning to his front door after getting the mail. Multiple neighbors tell police they then heard 3-4 gunshots and saw the Impala backing out of the driveway and heading eastbound. Clements was found lying bleeding in his driveway. He dies a short time later of his injuries at St. Vincent Hospital. An autopsy determined Clements suffered multiple gunshot wounds to his chest, right arm and right leg.

Around 11 p.m., an unidentified individual fires 30 shots from a rifle into IMPD's Northwest District Headquarters. Multiple rounds penetrate the building, but no officers are struck. Investigators find dozens of .223-caliber bullet casings on the ground outside, along with a crumpled collection of handwritten notes. The notes demand $100,000 and make overt threats to "white kids, white b******" and stated "white must die." The notes also make repeated references to "Yahuah" and "Yeshuah."

Sixteen shots are fired without warning into IMPD's North District Headquarters – again around 11 p.m. Again, police find .223-caliber bullet casings outside. They also find several pieces of paper folded together. Inside the notes were more references to "Yehuah" and "Yeshuah" as well as threats that "whites will drop and gone drop at any time of the day." A review of the casings from both shootings determines they are identical in both manufacturing brand and lot number. They are also determined to have been fired from the same firearm. Handwriting analysts also determine the notes to have been written by the same person. The casings are later matched to those found at the Clements homicide scene in Zionsville.

DNA profiles obtained from the notes and bullet casings found at the scenes of all three shootings are entered into the Combined DNA Index System (CODIS) for comparison. The system indicates the DNA profile matches 25-year-old Damoine Wilcoxson, of Indianapolis, from samples collected during previous arrests in Ohio for robbery. A subsequent search of Wilcoxson's record shows he is the suspect in a July case in which he is accused of holding a firearm to his girlfriend's head and threatening to kill her. Police determine Wilcoxson's girlfriend was the registered owner of a white Chevrolet Impala.

FBI agents assisting in the investigation locate the white Impala belonging to Wilcoxson's girlfriend the following day. Investigators also learn Wilcoxson has been maintaining a Facebook profile under the name "Frank Lucas" throughout the month of October. The profile contains numerous references to "Yehuah" and "Yeshuah." It also contains posts with language similar to those found in the notes left at IMPD headquarters, including a post that reads, "Eye 4 eye & tooth 4 tooth & head 4 head & a life 4 life that's what the Almighty father said … but if someone puts his hand on you, send him to the cemetery." An undercover agent requests to be friends with "Frank Lucas" on Facebook, which he accepts. The agent is then able to see a hidden post which reads partially:

"If you recall your history the Nazis came up with a 'final solution' to the Jewish problem … kill them all, well incase you haven't figured it out yet, I say, 'K I L L M A N K I N D' no one should survive. we all live in lies…'

IMPD officers arrive at the Peppermill Farms Apartments near 43rd Street and Shadeland Avenue with an arrest warrant for Damoine Wilcoxson in connection with the shootings at IMPD headquarters. As officers approach, someone opens fire on them. The suspect – later identified by police as Wilcoxson – then barricades himself inside an apartment with an infant child. Police call SWAT officers to assist at the scene and fire tear gas into the apartment in an attempt to force Wilcoxson to surrender. He eventually does so peacefully and is taken into custody. At the same time, Boone County prosecutors release a probable cause affidavit charging Wilcoxson with murder in the death of John Clements. The infant is taken to Riley Hospital for Children for examination, but is not believed to have been harmed.