Google unveils phone that can understand its surroundings 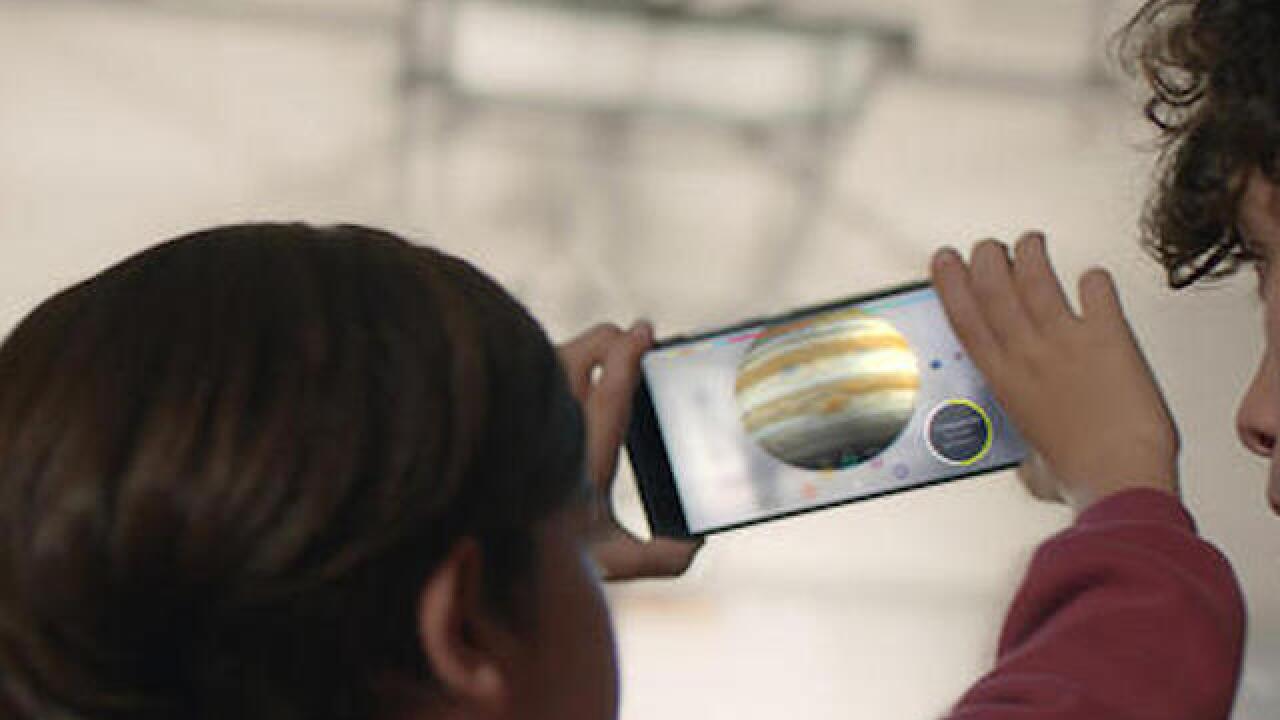 <p>This image provided by Google shows people looking at a view of the solar system using technology Google calls "Project Tango." Tango uses software and sensors to track motions and size up the contours of rooms, which can empower a smartphone to map building interiors. That’s a crucial building block of a promising new frontier in “augmented reality,” or the digital projection of lifelike images and data into a real-life environment. (Courtesy of Google via AP) MANDATORY CREDIT</p>

SAN FRANCISCO (AP) — A Lenovo smartphone unveiled Thursday will be clever enough to grasp your physical surroundings — such as the room's size and the presence of other people — and potentially transform how we interact with e-commerce, education and gaming.

Today's smartphones track location through GPS and cell towers, but that does little more than tell apps where you are. Tapping Google's 3-year-old Project Tango , the new Phab2 Pro phone will use software and sensors to track motions and map building interiors, including the location of doors and windows.

That's a crucial step in the promising new frontier in "augmented reality," or the digital projection of lifelike images and data into a real-life environment.

If Tango fulfills its promise, furniture shoppers will be able use the Phab2 Pro to download digital models of couches, chairs and coffee tables to see how they would look in their actual living rooms. Kids studying the Mesozoic Era would be able to place a virtual Tyrannosaurus or Velociraptor in their home or classroom — and even take selfies with one. The technology would even know when to display information about an artist or a scene depicted in a painting as you stroll through a museum.

Tango will be able to create internal maps of homes and offices on the fly. Google won't need to build a mapping database ahead of time, as it does with existing services like Google Maps and Street View. Nonetheless, Tango could raise fresh concerns about privacy if controls aren't stringent enough to prevent the on-the-fly maps from being shared with unauthorized apps or heisted by hackers.

Lenovo says the Phab2 Pro will sell for $500 when it begins shipping in the U.S. in August. The device is expected to be available throughout the world by mid-September, in advance of Apple's anticipated release of the iPhone 7.

In another effort to put a new twist on smartphones, Lenovo also previewed the newest models in its Moto line, which it bought from Google two years ago.

The Moto Z and Moto Z Force will both let people snap on additional equipment called "Mods" to the back of the phones. The initial Mods include a speaker to amplify music, a projector for displaying photos and video from the phone and a power pack that provides 22 hours of additional battery. The phones will be available exclusively in U.S. through Verizon this summer before a global release in the fall.

The new phones are coming out as phone sales are slowing. People have been holding off on upgrades, partly because they haven't gotten excited about the types of technological advances hitting the market during the past few years. Phones offering intriguing new technology such as Tango could help spur more sales.

But Tango's room-mapping technology is probably still too abstract to gain mass appeal right away, says Ramon Llamas, an analyst at the IDC research group.

"For most folks, this is still a couple steps ahead of what they can wrap their brains around, so I think there's going to be a long gestation period," Llamas says.

Other smartphones promising quantum leaps have flopped. Remember Amazon's Fire phone released with great fanfare two years ago? That souped-up phone featured four front-facing cameras and a gyroscope so some images could be seen in three dimensions. The device also offered a tool called Firefly that could be used to identify objects and sounds. But the Fire fizzled, and Amazon no longer even sells the phone.

The Phab2 Pro also looks impressive, with a 6.4-inch display screen and four cameras to help perform its wizardry. Lenovo boasts the phone's sensors can capture about 250,000 measurements per second.

Despite all the fancy hardware, the key to the Tango phone's success is likely to hinge on the breadth of compelling apps that people find useful in their everyday lives.

Google had previously released experimental Tango devices designed for computer programmers, spurring them to build about 100 apps that should work with the Phab2 Pro. Home improvement retailer Lowe's is releasing an app that enables Phab2 Pro users to measure spaces with the phone and test how digital replicas of appliances and other decor would look around a house.

Both large and small tech companies are betting that augmented reality, or AR , will take off sooner than later. Microsoft has been selling a $3,000 prototype of its HoloLens AR headset. Others, such as Facebook's Oculus and Samsung, are out with virtual reality, or VR, devices. Google has one coming as well through its Daydream project. While AR tries to blend the artificial with your actual surroundings, VR immerses its users in a setting that's entirely fabricated.

The AR and VR devices out so far invariably require users to wear a headset or glasses. In many cases, they also must be tethered to more powerful personal computers, restricting the ability to move around.

None of that is necessary with the Phab2 Pro. Instead, you get an augmented look at your surroundings through the phone's screen.

"This has a chance to become pervasive because it's integrated into a device that you already have with you all the time," says Jeff Meredith, a Lenovo vice president who oversaw development of the Tango device. "You aren't going to have to walk around a mall wearing a headset."