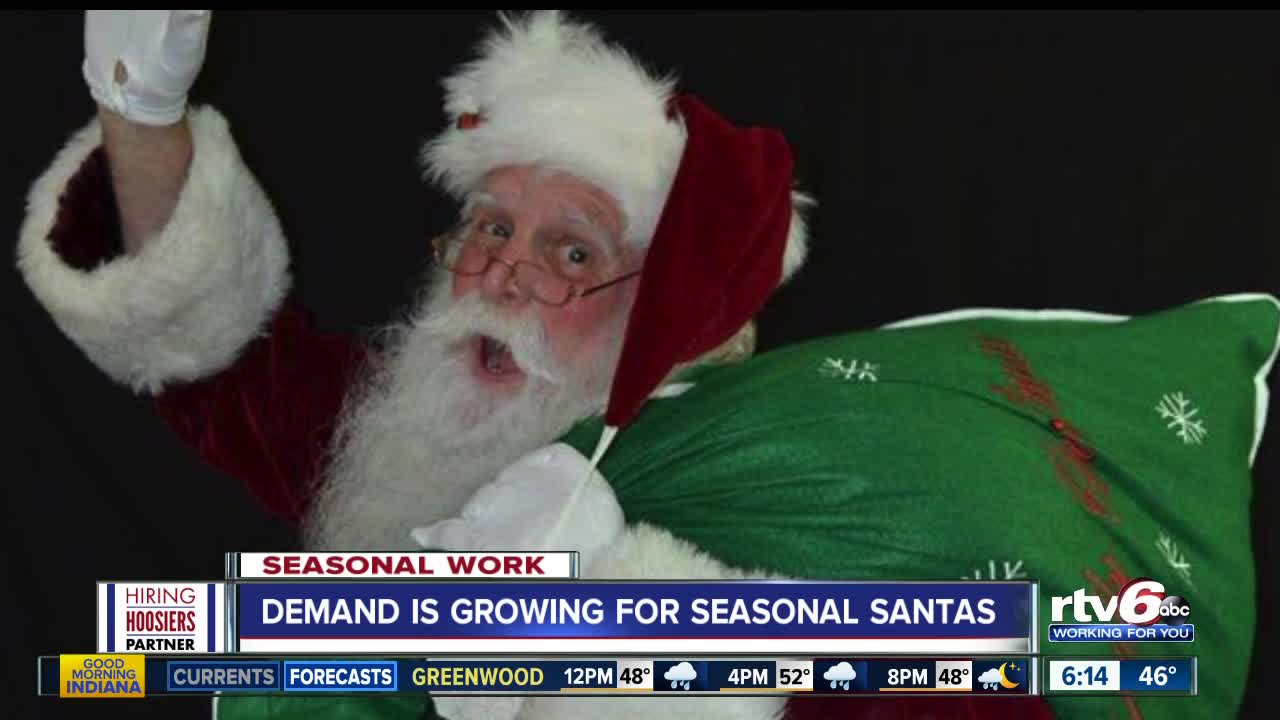 A white beard. And small spectacles. Larry Shaw is not always Larry Shaw. "I've been Santa for 40 years. Going on 41 years," he says.

He may be able to look the part convincingly, but by no means does Larry ever think he's the real Santa.

And he speaks for any Santa you might see at a mall or a holiday party.

Larry just knows Santa has a big job to do around the holidays: seeing kids, checking lists, being here, and being there.

Therein lies the opportunity to land a job.

Hundreds in Central Indiana have already gotten on the Santa bandwagon — or sleigh, if you will.

To understand how Larry landed in this jolly job, we go back almost 41 years.

The original spell was cast the day Larry's wife volunteered him to play Santa at his daughter's school four decades ago.

His wife fell in love with the idea of Larry playing Santa.

He visited one school and then two and then schools across his side of town.

Then, Larry branched out to nursing homes.

At that time, he says, "I was getting paid. I got paid in smiles."

As Larry's beard grew, so did interest in his Santa services.

The postal carrier started getting requests from businesses on his route.

That is when he started charging money for his appearances.
"I was surprised how much I got paid," Larry admits, "It was a lot more than I expected."

He says private event Santas can make anywhere between $100 and $150 per hour.

In fact, his "Hoosier Santas" group helps book Santas and provides resources and advice for those interested in this kind of seasonal work.
He advises spending a day taking a Santa class to learn the nuances of becoming a convincing Santa.

Larry says, "Your good Santas are also entertainers, so they know stories about the north pole, for instance. They have stories about their magic key that lets them in the house — different things they have so they can interact as the man himself."

There is a logistical side to this gig too.
Like professional clowns, Santas are encouraged, and sometimes required, to have insurance.

Assembling a quality costume also helps and could cost hundreds of dollars, as an initial investment.

Rosenquist says Cherry Hill has already booked Santa impersonators for all Simon Malls in the Indianapolis area. However, the company is still looking locally for elves, photographers, and managers for the Santa experience.

Cherry Hill usually searches for its seasonal Santas in the springtime.
During the search, Rosenquist says those with natural, real white beards move to the front of the hiring line.

She also stresses authenticity, a big heart, and love for the holidays.

It's been quite the sleigh ride for him.