Hiring Hoosiers: Hoosier hopes to catch a shark with her fish lure 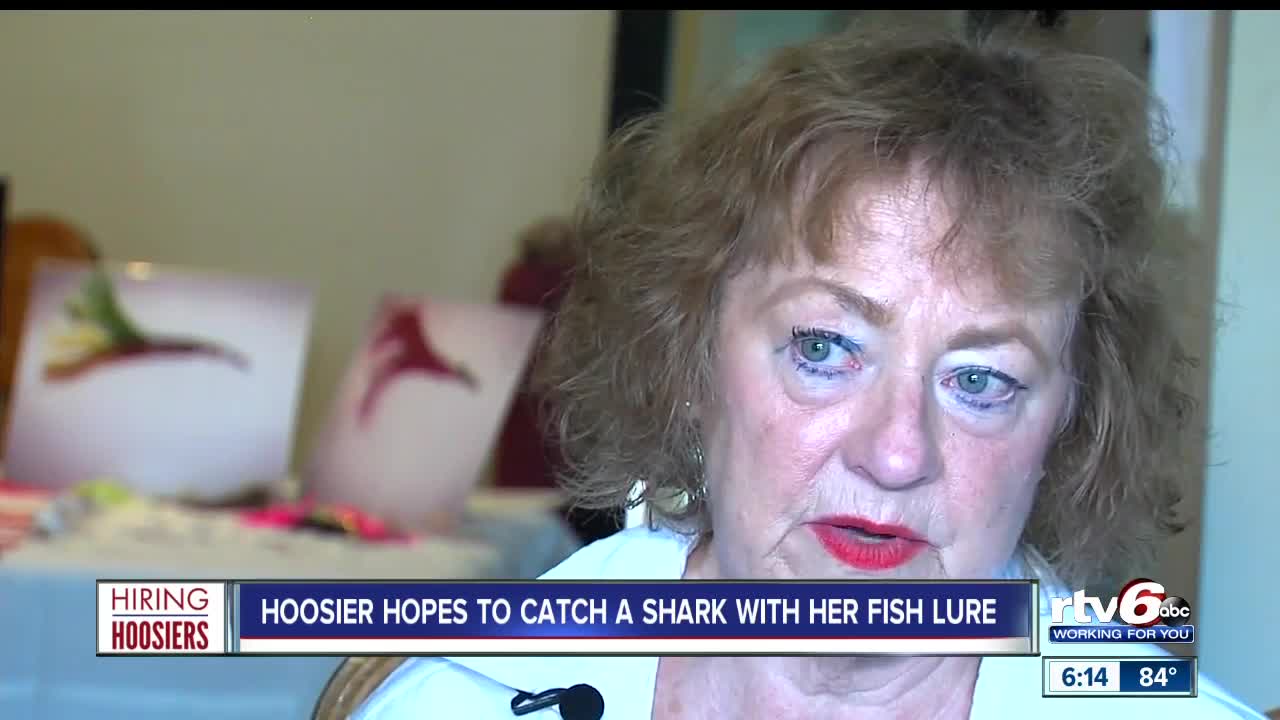 woman from Plainfield who hopes she can pull in a shark for her patented product, the Dream Fish Hook Lure.

Hiring Hoosiers shows you many paths you can take to connect with you with jobs and training programs.

PLAINFIELD — A woman from Plainfield hopes she can pull in a shark for her patented product, the Dream Fish Hook Lure.

Meredith Hughes was one of hundreds of Hoosiers hoping to reel in a catch at the Shark Tank open-call at Indianapolis Motor Speedway.

"I was like wow, Shark Tank is going to be here," Hughes said. "When they were coming here, I thought, man they are coming to Indianapolis, I was just so thrilled."

With a few weeks notice, this 72 year old was ready to jump into the tank. Hughes product is the Dream Fish Hook Lure. Although she is the one creating it, she says the idea came from someone else, her dad.

"It was 1998, two months after he passed away, he woke me up in a dream and I got up and went to the table and drew that exactly as he told me," Hughes said.

Hughes has fond memories of her father, a World War II veteran, Butler grad, and her favorite memory is from her childhood, fishing.

"He was quite a fisherman. He took me fishing all the time, he was always talking about the worms being gone on, the fishing hook and he said if I could just figure out how to get a fish without them eating the worm and getting away and that is where this dream came from," Hughes said.

The Indianapolis native grew up fishing with her family on Geist Reservoir.

"There were all little alcoves and coves and everything and there was nothing on them," Hughes said. "So we would switch from one to the other and fish from each one to find out which one had the best fish biting."

Her lure is specially designed to attract and keep the fish on the line in the ocean or freshwater. Hughes got a utility patent for it in 2006.

"I also had to find more brass football shaped fishing heads that is one of the key components of my father's dream and the lure because it enables the lure to wobble more in the water," Hughes said.

Helping Hughes make her dream lure a reality are her sons. One, a police officer, the other a machinist and welder. They work together as a family in his garage.

"My older son George knew that I was going to audition for Shark Tank and he said well mom, if you don't make shark tank, we are still going to make it," says Hughes.

Hughes wants her product made in the USA, and for part of her profits to go to clean water organizations.

"What I would dream of happening you know people would enjoy fishing with it, would have good luck fishing with it, be proud that their parts all made in the USA and there is no lead," Hughes said. "This fishing lure is a Cadillac of fishing lures, it is just really really dear to my heart."

Hughes' lure is not on store shelves yet. She is hoping to save up for a lithe to help with their production.