Local organization provides employment opportunities for those with criminal records 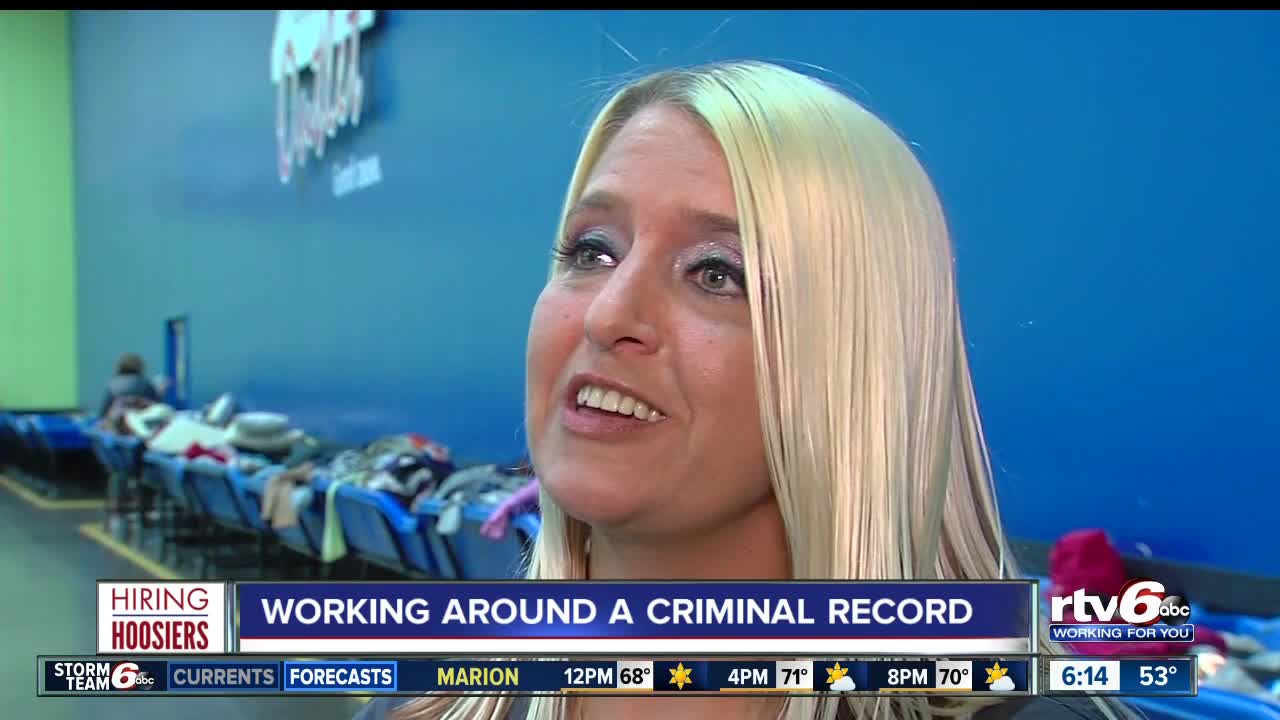 It can be tough landing a job if you have a felony conviction glaring on your criminal record.

GREENWOOD — Landing a job can be tough if you have a felony conviction on your criminal record, but one organization serving Central Indiana is helping forge a future for those who want a second chance.

Angel Beyersdorfer is a Team Lead Two for the Goodwill Outlet store in Greenwood. In essence, Beyersdorfer is the equivalent of an assistant store manager. She's in charge of scheduling staff, leading shifts, doing payroll, and managing 40 employees at a time.

Beyersdorfer is proud of the strides she's made to get to this point.

"When I started here," she says, "I was in a halfway house. And I got the job here, and it was the best day ever."

A halfway house was a step up for Beyersdorfer. Battling a drug addiction for ten years, she knows what rock bottom looks like. Daily doses of meth eventually led to an arrest and jail time. She faced a felony charge, and the Department of Child Services took her three kids away from her.

Calling this her wake up call, Beyersdorfer says, "I had nothing. Everything I had was gone that day."

So Beyersdorfer made a pact to change. She got clean, got out of prison and into a halfway house. She wanted her children back, and she needed a job.

But Beyersdorfer had a felony conviction, and her tainted criminal record led to one closed door after another.

"The second they seen my record, they didn't want me," Beyersdorfer recalls. "Like I applied at Walmart, got the job, they got my criminal background, and then they didn't have me start. Same thing at the dollar store. I didn't get the job. So then, I came to Goodwill."

Goodwill says it has plenty of open positions in retail and outlet stores like this one, but it also has open positions at the corporate level. The company prides itself on giving people a second chance.

Goodwill has roughly 200 positions open in its retail and outlet stores. Out of its more than 4,000 workers, a significant number of employees dealt with some kind of barrier other employers refused to overlook, including criminal convictions. Goodwill claims it puts people to work who want to work, despite a tainted background, and promises to provide opportunities for those who wish to advance in the company.

Beyersdorfer is living proof. She started at Goodwill more than three years ago as a part-time donation attendant and moved up to cashier. She was promoted to a shift supervisor and is now on the path to run her own store. Beyersdorfer is on an upward climb, even with a felony conviction on her record.

"It makes me feel like I still can be somebody and my background doesn't judge me. I'm not judged by my background here, " she says.

Given the current labor force shortage, more companies are making moves to employ job candidates who have drug or alcohol convictions, as long as they meet certain requirements and conditions.

The state of Indiana also recently passed a law to help applicants land a job. Those with nonviolent and non-sexual offenses can file what's called a "Restricted Disclosure of Arrests of Convictions," which blocks crimes on your record from showing up on criminal history checks.

Beyersdorfer has been clean and sober for more than three years in a stable, budding career, and her children are back home with her — one even making the honor roll.