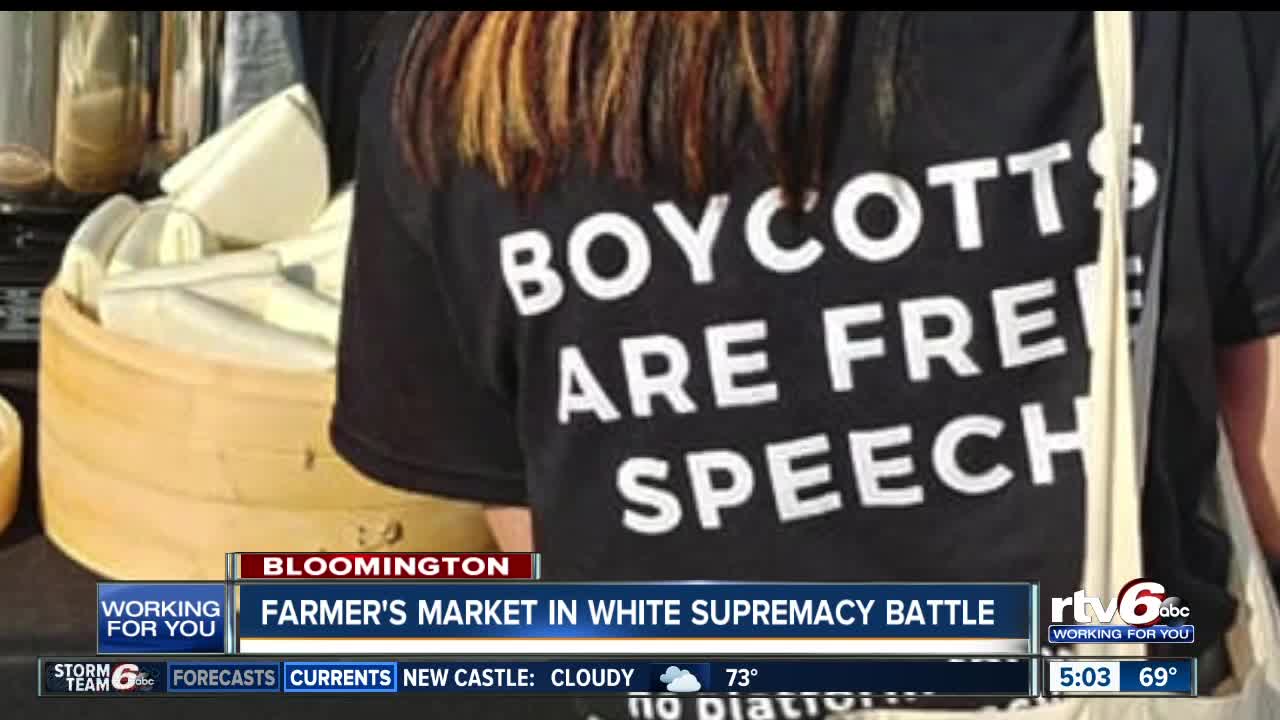 After a protester was arrested on Saturday for Criminal Trespass charges at the Bloomington Community Farmers' Market, the city announced on Monday that the market would cease operations for the next two weeks. The "concerns about public safety" also comes two days after a group called 'No Space for Hate' released plans to protest at the farmers market on Saturday, Aug. 3.

BLOOMINGTON — After a protester was arrested on Saturday for Criminal Trespass charges at the Bloomington Community Farmers' Market, the city announced on Monday that the market would cease operations for the next two weeks. The "concerns about public safety" also comes two days after a group called 'No Space for Hate' released plans to protest at the farmers market on Saturday, Aug. 3.

The tension stems from a vendor at the market — Schooner Creek Market — who has alleged ties to white nationalist causes and groups. For the past few weeks, protesters have been targeting the local farm, which is one of many that sell fruits, vegetables, and other products at the farmers market each weekend.

Earlier this month, a report in the Daily Beast showed that one of the owners of the farm, Sarah Dye, was posting in online chat rooms connected to the white supremacy group 'Identity Europa.' The publication obtained leaked chat logs outing Dye and Schooner Creek co-owner, Douglas Mackey, as members of the group.

Protesters have since organized flyer campaigns at the Bloomington Farmers' Market and have urged people not to support Schooner Creek. People have also tried to get the city to remove the farm, but thus far, the city has refused — citing First Amendment grounds.

According to a release by the city, officials have "identified increasing threats to public safety" since.

"As Mayor, I have spoken for our City to condemn white nationalism and white supremacists as a scourge on our country and our community, and to promise that we will do all we can to overcome their legacies and any current efforts," Bloomington Mayor John Hamilton said. "We also want to assure that everyone knows that all are welcome in our inclusive Bloomington, and that our Farmers' Market will embody those values of inclusion and welcoming, as well as be a safe space for all to gather, as our community expects every Saturday."

The protester arrested on Saturday was reportedly arrested for refusing to move from in front of a booth — Schooner Creek Farm — that stationed the alleged white nationalist group. In a viral post, the woman can be seen holding a sign and standing side-by-side with the group who allegedly is part of white nationalist movements. In another photo, the woman is seen being arrested by Bloomington Police Department.

According to the Bloomington Police Department, the protesters was holding a sign and pacing in front of the vendor booth when staff from the Parks and Recreation Department and the City Department for the Farmers' Market advised the officers to make contact with the protester "to reiterate their requests that she relocate to a designated area to protest."

BPD says that the protester denied to remove herself from the area after repeated requests from officers, which led to her arrest. The protester was taken into cutody and transported to the Monroe County Jail. The protester is being charged with Criminal Trespass, a class A misdemeanor.

“In light of recommendations from our local public safety officials, advice from national experts, and awareness of recent tragic incidents of violence at similar public gatherings, we are hitting the pause button to protect public safety in Bloomington,” Hamilton said. “We will be gathering with a wide range of local folks to identify how best our community embodies our values of justice and inclusion, and protects our treasure of the Farmers’ Market.”

Last month the city released another statement on the alleged white-supremacist affiliations of the vendor where the Mayor said:

"I join the vast majority of Bloomingtonians in abhorring and unequivocally condemning the odious doctrine of white supremacy. We know how important speaking out against hate is these days, with events and statements in our country and around the world seeming to open the door for hateful ideologies."

A press conference will be held on Wednesday morning to address the community's concerns.