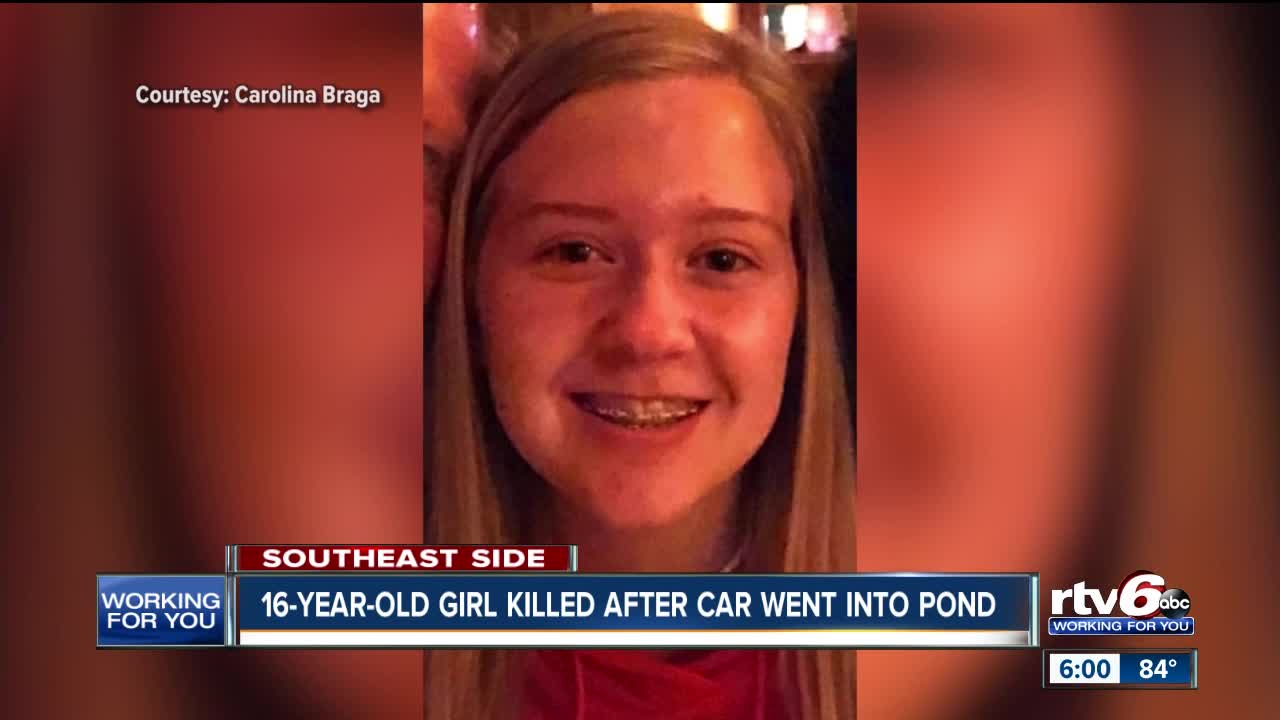 INDIANAPOLIS — The community continues to mourn the loss of a teenage girl after a weekend car crash on the southeast side. Ella Magyar, 16, a Franklin Central High School student, died after the car she was in crashed into a pond.

An Indianapolis Metropolitan Police Department officer pulled her and another teen from the car. Two others were able to get out and swim to safety themselves. It all happened around 7 p.m. Saturday on Frye Road near Shelbyville and East Stop 11 roads.

People in the area said that stretch of road is dangerous and they want to see it fixed.

Neighbors said the car went off the road, hit trees before going underwater.

"People come flying around the curve," Greg Schiefelbein, who lives near the crash scene, said. "It is kind of a blind spot where the bushes are on the other side of the road."

It's an ongoing issue on Frye Road, one that neighbors said has resulted in crashes before but never one like this.

"Nobody really believed that it was real at first," Madison Weaver, a classmate of the teens in the crash, said. " We were all just like, 'Oh my gosh, no! This can't be real.'"

As the community remembers Magyar with a memorial by the pond, they're also pushing for change. It's still unclear what caused the crash but there is a petition online calling for guardrails to be installed at the curve.

"I think it's a good idea. I did sign the petition myself," Weaver said. "This curve is always a problem like you definitely need to go slow around it and people should know that but I think it was just an accident."

They say guardrails would have prevented the car from going into the pond. Others said they think an increased police presence would help.

"Maybe have more law enforcement out here letting people know that they are going to be clocked on their speed," Schiefelbein said.

They are changes this community hopes to see before another life is lost.

"To think they are just out on a Saturday trying to have fun and just to have it happen is just tragic," Schiefelbein said.

All four teens in the car at the time of the crash were students at Franklin Central High School. The school issued a statement on Facebook: "Together, we can work through this. Together, we can honor Ella's memory and help our Flashes that are still hospitalized."

The school also is encouraging students to use mental health and counseling resources that are available.