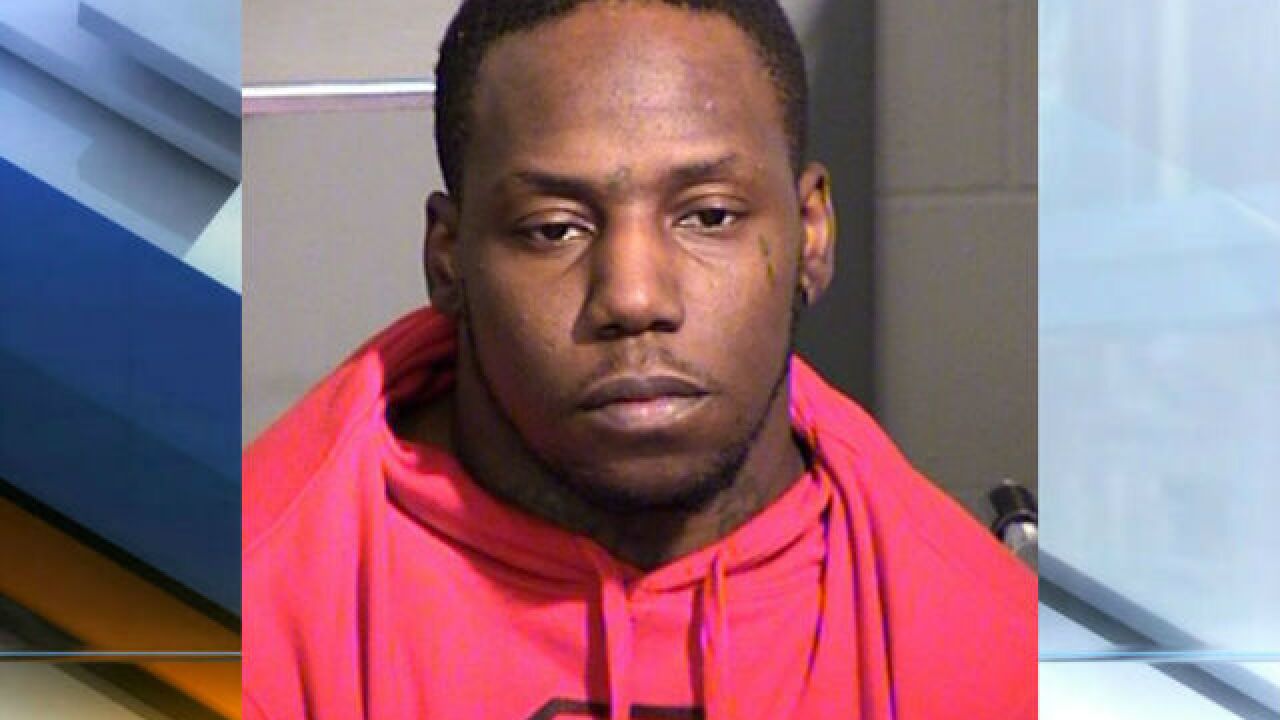 INDIANAPOLIS -- The man identified in a shooting victim’s blood-written message to police as “Wheelchair Cash” was found guilty Wednesday of murder, robbery and criminal confinement for orchestrating a December 2016 setup at a northwest side apartment complex.

Allan H. Walker Jr., 30, was arrested in May 2017 on seven felony counts in connection with a robbery and double shooting on Dec. 23, 2016, at the Wildwood Village Apartments, located on Guion Road just south of where I-65 and 38th Street split on the northwest side.

Police found one victim, 33-year-old Kevin Dudley, bound and mortally wounded inside the passenger seat of a pickup truck. Dudley’s friend, identified in court documents as “S.F,” was located a short distance away in the doorway of one of the apartment buildings suffering from gunshot wounds to his shoulder and head.

On a glass door near where S.F. had collapsed after being shot, police found the words “Wheelchair Cash” written in blood.

That message, in addition to testimony by S.F., who survived, eventually led police to Walker, who is wheelchair bound.

Prosecutors charged Walker with ordering two other men to rob and then shoot Dudley and S.F. On Wednesday, a Marion County jury returned their verdict, finding Walker guilty of two counts of murder, one count of robbery and two counts of criminal confinement. Findings of “not guilty” were returned for an additional count of robbery and one count of conspiracy to commit murder.

S.F. told detectives he was going to the home of one of his barber shop's clients to play video games on the night of the shooting. He told police his client was in a wheelchair and his nickname was "Cash."

According to the affidavit, S.F. said as soon as he walked in the door of the apartment a man wearing a mask came out of the kitchen and struck him over the head with a bottle. A second man then jumped down the stairs and said "nobody move."

S.F. told police he and Dudley then began to wrestle with the suspect with the gun, but were unsuccessful in taking it from him. He then forced them to the ground at gunpoint while they tied S.F. and Dudley's hands behind their backs.

According to S.F., Walker was giving the men directions from his wheelchair throughout the entire incident.

"S.F. stated that the two black male suspects followed every direction they were given by 'Cash,'" detectives wrote in the affidavit. "S.F. stated that 'Cash' instructed the suspect with the mask to go out to S.F.'s truck to see if there was any money or jewelry."

The men then went through S.F. and Dudley's pockets. S.F. told police he asked the suspects to let him and Dudley go.

"'Cash' told S.F. that they were going to let them go home," the affidavit says. "The way this was said, S.F. believed that the men's intention was to kill him and Kevin Dudley."

S.F. told police the men then led him and Dudley to the pickup truck outside.

One of the suspects shot Dudley in the head. He then attempted to shoot S.F. in the head as well, but struck him in the shoulder instead.

After the gunshots, S.F. said the men walked away briefly. That's when he jumped out of the truck and ran.

While attempting to flee, S.F. tripped. It was then, he said, the suspect caught up with him and shot him in the head.

After the suspect left, S.F. got up and began to knock on doors screaming for help. He told police he thought he was going to die, so he wrote "wheelchair cash" in blood on the glass door to a building.

Based on information from S.F., the apartment maintenance man and other tenants, police determined "Cash" was Walker, who lived in Building 11 where the robbery and original shooting had taken place.

Working with the U.S. Marshal's Office, IMPD located Walker in Merrillville, Indiana, and took him into custody. He was then extradited to Marion County to face charges.

With the finding of guilty on Wednesday, Walker faces a maximum possible sentence of 178 years in prison, with an advisory sentence of 117 years if served consecutively. His minimum sentence, if terms for all counts are served concurrently, is 45 years.

A sentencing hearing was scheduled in the case for August 3 at 10:00 a.m. in Marion County Criminal Court 6.