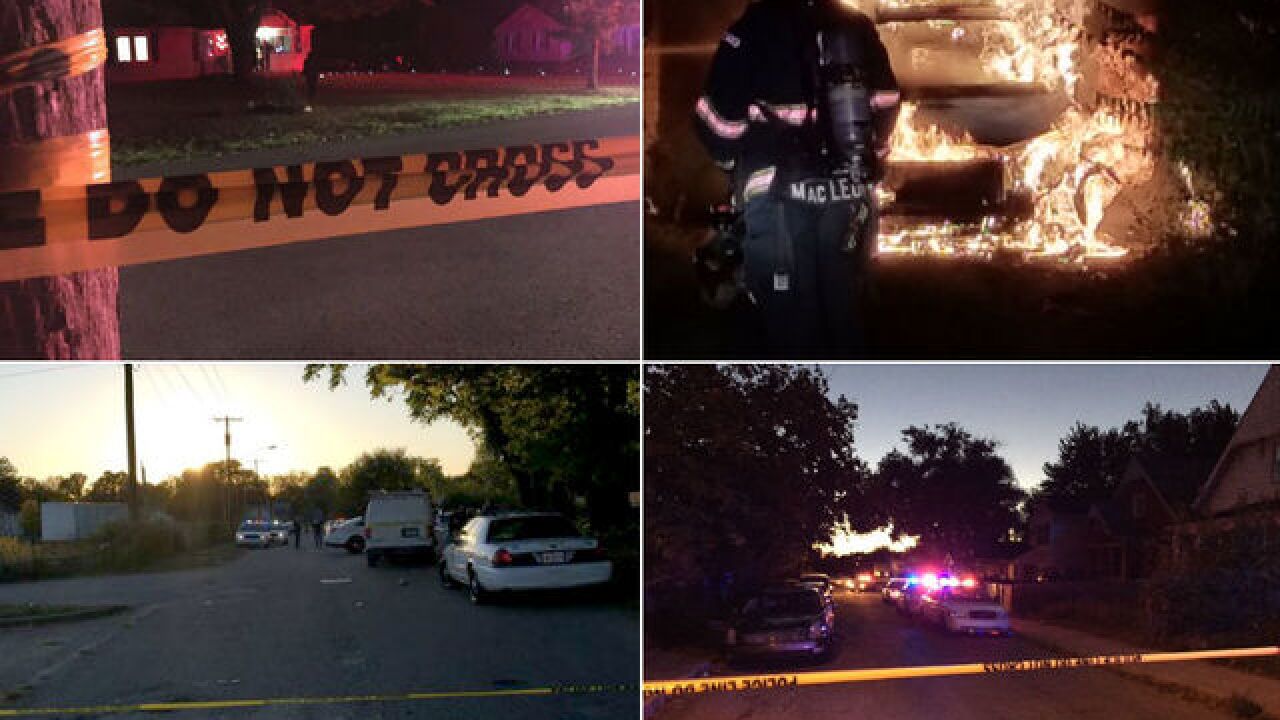 INDIANAPOLIS -- In just three days in Indianapolis, nine people were shot, three were stabbed and two were found dead in a burned car. In all, six people were killed between Friday morning and Sunday night.

The incidents ranged from the very first at 1:35 a.m. Friday – a 30-year-old man found with a serious gunshot wound in the 500 block of Pershing Avenue – to a 19-year-old girl who walked into Methodist Hospital ER with a gunshot wound to her foot Saturday night.

Shortly after midnight Saturday, the burned bodies of two women were found inside a destroyed car on the west side. No cause of death had yet been determined, but IMPD said they were treating the case as a criminal homicide investigation.

The final incident happened near Kenmore Road and Kenyon Avenue Sunday afternoon, when a 27-year-old woman was shot while driving. She was transported to the hospital for treatment. Police said young children in the car at the time of the shooting weren’t harmed.

In all, six people were killed over 72 hours:

Only Dobbins is being treated as a non-criminal incident, police said. Investigators believe the teen was accidentally shot and killed by a family member after being mistaken for an intruder.

Over the entire three-day span, IMPD responded to 14 serious violent incidents. Explore the locations and details of all of those cases in the interactive map below, and find a chronology of events underneath:

1:35 AM – Officers respond to 30-year-old man with serious gunshot wound in 500 block of Pershing Avenue. Victim transported to hospital with “major injury.”

9:59 AM – 42-year-old woman receives severe laceration in stabbing in the 1500 block of North Ritter Avenue. Possible suspect identified by police.

11:08 PM – 45-year-old man suffering from serious gunshot wound reports he was shot earlier in the day.

12:00 AM – Two unidentified women found dead inside a burned car in the 1600 block of North Goodlet Avenue. IMPD treating case as a criminal homicide investigation.

4:15 AM – Eugene Dobbins, 15, accidentally shot and killed by family members while walking around house late at night.

4:50 AM – Officers find 37-year-old man suffering from a gunshot wound in the 5900 block of North Meridian Street. No suspect information available.