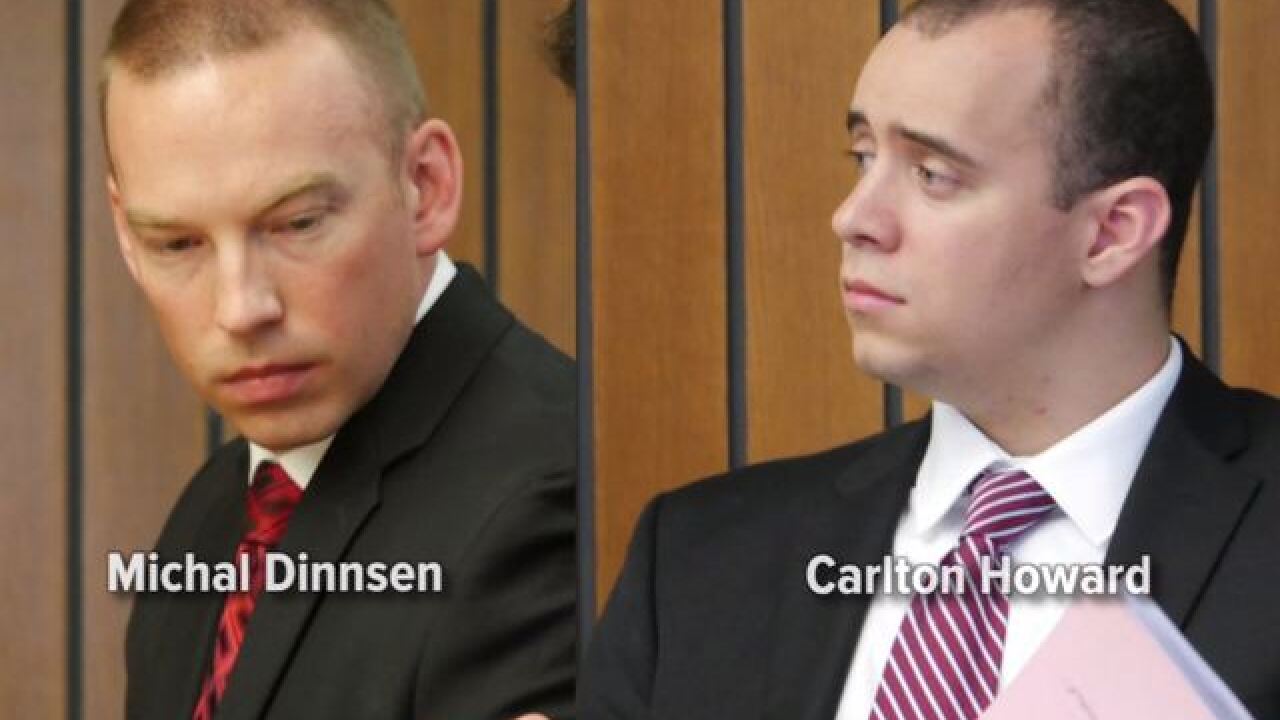 INDIANAPOLIS -- After three days of testimony, the Indianapolis Civilian Police Merit Board announced its decision on the fatal shooting of Aaron Bailey – clearing both officers of wrongdoing in a 5-2 vote.

IMPD Chief Bryan Roach recommended the termination of Officers Carlton “C.J.” Howard and Michael Dinnsen in November following a unanimous finding by the department’s Firearm Review Board. A week earlier, a special prosecutor appointed in the case had announced he was not file criminal charges against either man.

In his recommendation, Roach said Howard and Dinnsen violated IMPD policy when they shot Bailey, who was unarmed, after he fled from a traffic stop near the intersection of Burdsal Parkway and Riverside Drive.

The Indianapolis Civilian Police Merit Board, chaired by former Indianapolis public safety director Dr. David Wantz, convened for a three-day hearing this week to determine whether to accept or reject Roach’s recommendation.

Roach himself took the stand on Tuesday and Wednesday to explain his decision.

The chief testified that he believed Howard and Dinnsen put themselves and others in danger by not properly "orienting" themselves to the situation and by approaching Bailey's car following the crash, rather than taking cover.

Representing the officers and the Indianapolis Fraternal Order of Police was veteran attorney John Kautzman.

In a tense back and forth with Roach, Kautzman accused the chief of making inappropriate appointments to the Firearms Review Board and of placing political considerations over department policy. He also pointed out that Roach’s recommendation to fire Howard and Dinnsen is at odds with the city of Indianapolis’ position in ongoing litigation brought in federal court by Bailey’s passenger, Shiwanda Ward.

“You’re aware that the position you’re taking in this case is exactly opposite the position the city is taking in federal litigation regarding the righteousness of these officers’ actions?” Kautzman asked.

Roach said that didn’t affect his decision, or his belief that the officers acted inappropriately that night

Roach’s argument in the case was represented by IMPD general counsel Melissa Coxey and city attorney Nabeela Virjee. Coxey, the lead in the case, summed up their position in just 9 minutes of the 30 allotted to her for closing arguments.

“The real tragedy of this,” Coxey went on to say, “is that it didn’t have to happen. Officers Howard and Dinnsen didn’t utilize their training.”

Coxey ended by asking the board to trust the judgment of IMPD’s chief. Kautzman asked the board to look at Bailey’s actions.

“The officers weren’t cowboys, weren’t panic-stricken, weren’t lighting up this car because they led them on a chase,” he said. “The person who complied absolutely ended up safe. The person who didn’t comply ended up in danger. If the tactics were a failure, why didn’t we have two people shot that night? The actions of Bailey caused him to get shot.”

Kautzman said the reason the chief ignored reports from internal affairs, the lead homicide investigator and the special prosecutor that found no fault with the officers’ was because he wanted to “put the toothpaste back in the tube.”

“The decision had been made. They thought the community needed these officers to go. And that’s not the way it’s supposed to happen,” Kautzman said.

After the ruling was announced, Kautzman joined Indianapolis Fraternal Order of Police President Rick Snyder outside the hearing room.  Snyder didn't mince words, saying "there were leadership decisions that were made here that were wholly inappropriate."

"There was no desire to have an understanding of what went on here. The die was cast very early on," Snyder said.

Chief Roach also spoke after the hearing, saying he believed he presented the best case to the board he could. He said the department will continue with its promises to provide officers with implicit bias training and to review use-of-force policies.

. @IMPDnews @IMPD_Chief : "We presented our case. Unfortunately we weren't able to convince the board." pic.twitter.com/mNx6u30u8U

Today’s decision by the Civilian Police Merit Board to overturn the recommended termination of two officers is a disappointing and frustrating reminder that even as we continue our efforts to reform our criminal justice system, much work remains to be done.

I have complete faith in the judgment and the leadership of IMPD Chief Bryan Roach, whose experience over three decades in the police department has more than prepared him to make difficult decisions as it relates to the discipline and termination of officers.

The fact that Chief Roach’s experienced, well-reasoned decision to terminate two officers has been overturned by the votes of five individuals highlights a Merit Board system that must be changed if we are to continue building bridges of trust between our brave police officers and the communities they proudly serve.

In the coming days, I will be engaging with community and public safety leaders to assess what should be considered to help restore faith in the police discipline process.

For our community as a whole, I simply ask that even as today’s decision creates understandable sadness and frustration, it is only through unity, not division, that we can continue to move our city forward. Let us use this moment as an opportunity to come together and resolve that we will honor those affected by this tragedy through a commitment to peaceful change.

READ MORE |  No charges for IMPD officers in fatal shooting of Aaron Bailey  |  Officers knew Aaron Bailey's passenger was 'being monitored' in homicide prior to shooting  |  Man was shot by two officers 'multiple' times  |  Man killed by IMPD officers was in-and-out of jail, convicted of 14 felonies  |  IMPD Chief: Officer-involved shooting a 'true test' of relationship between police & community