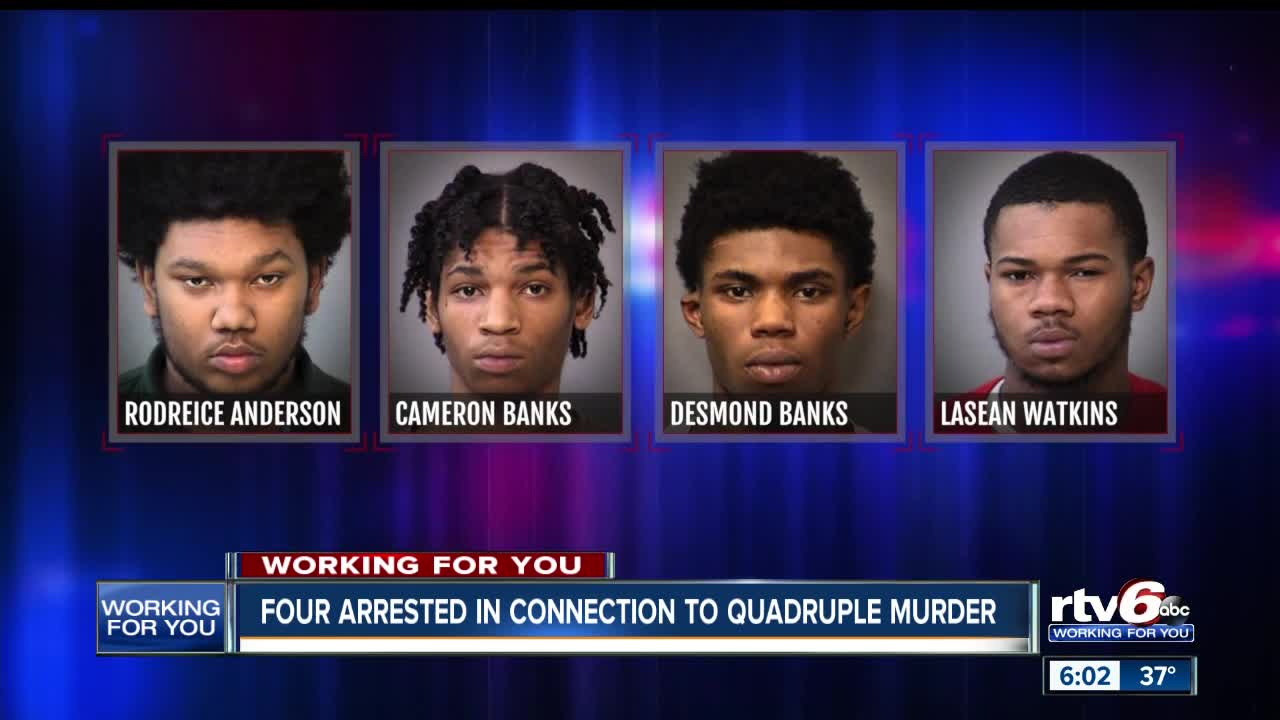 Four teens were arrested and charged in connection to a quadruple homicide on Indy's northeast side. 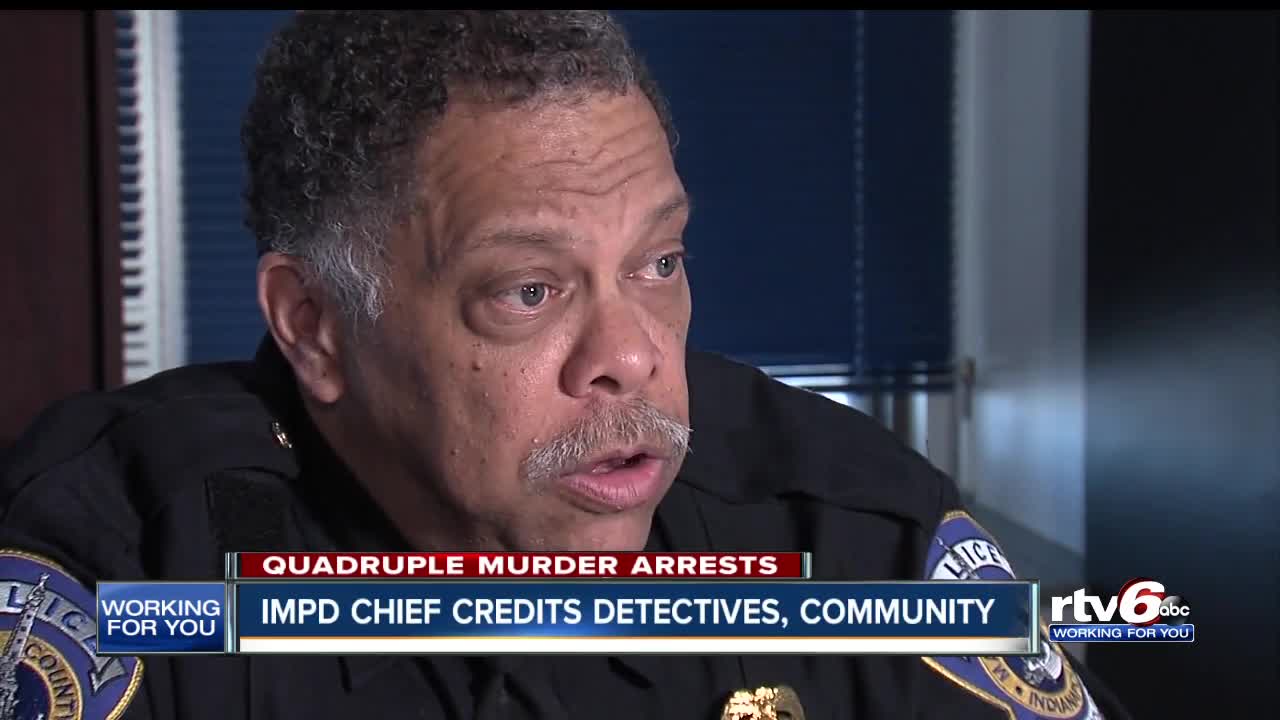 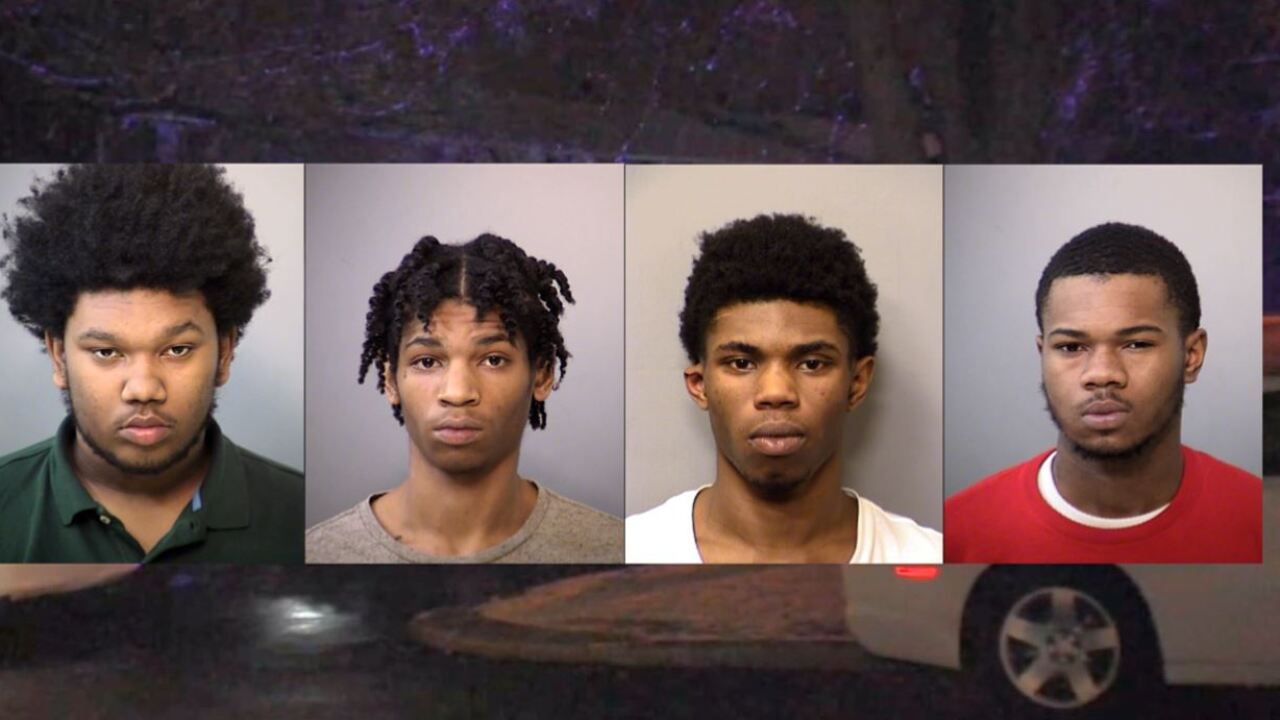 INDIANAPOLIS — Four people have been charged in connection with a quadruple homicide in Indianapolis earlier this month.

“I want to applaud the quick action and thoughtful investigatory work of the Indianapolis Metropolitan Police Department, as well as the cooperation and collaboration of community members," Mayor Joe Hogsett said during the press conference where the arrests were announced on Wednesday. "Today would not be possible without the work of IMPD officers, dedicated to building relationships, creating community dialogue, and utilizing best practices in policing."

Indianapolis Metropolitan Police Department Chief Randal Taylor said the crime was solved with assistance from the community and IMPD officers and detectives who worked extra hours for a break in the case.

"People have to understand, I got a really good group of officers and investigators," Taylor said. "They are seasoned they've been doing this for a while, they do a fantastic job, and alot of times people don't really see that."

IMPD officers were called to an apartment in the 4100 block of Shady Oak Drive just before 10:30 p.m. Feb. 5 after a neighbor noticed a back patio door was shattered and saw someone fleeing from the residence.

According to a probable cause affidavit, the four suspects had planned to rob Roberts at his apartment on February 5. During the course of that robbery, Roberts, Hunt, Ford and Wills were all murdered.

When investigators arrived at the scene, they noted that the home appeared to have been ransacked with "drawers pulled out and falling from dressers." An empty black safe was also located in one of the open closets, open, with the key still on top. Two guns were also missing from the home.

According to a probable cause affidavit, a witness told detectives people were gambling at the house before the shooting.

A witness gave detectives a vehicle description, which they used to find a suspect vehicle from nearby surveillance video.

Probable cause documents state that seven cell phones were recovered from the home at the time of the crime.

Charmaine Childs, a resident at Carriage House East, said she can finally exhale now that four people have been arrested and charged for the murders.

"If they killed four people, they don't care about anyone, humanity, period," she said. "They are all kids. Now, eight lives gone."

Mears said the four suspects could spend the rest of their lives in prison.

Families of the victims told RTV6 they are focused on laying their loved ones to rest and continuing the grieving process.

Initial hearings for all four defendants have been set for 1 p.m. Thursday.

"While nothing can bring back the four young people whose lives were cut much too short by senseless violence, these charges serve as a meaningful step toward delivering justice to the impacted families," Hogsett said.