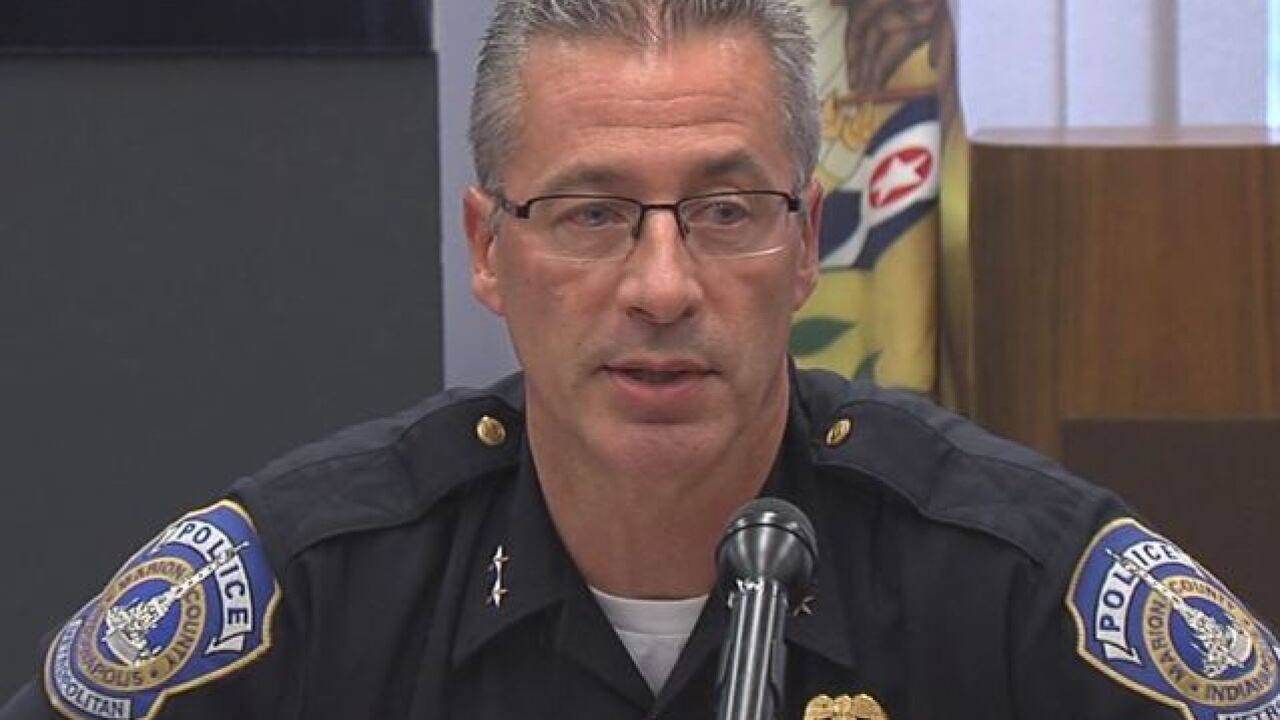 INDIANAPOLIS -- IMPD Chief Bryan Roach faced heated questioning Wednesday at a merit board hearing over his decision to recommend termination for the two officers who fatally shot Aaron Bailey.

A special prosecutor declined to file criminal charges against IMPD Officers Carlton Howard an Michael Dinnsen in October after determining there was “insufficient evidence” to refute their claims of subjective fear that Bailey was about to fire at them following a brief pursuit in June.

READ MORE | No charges for IMPD officers in fatal shooting of Aaron Bailey | Officers knew Aaron Bailey's passenger was 'being monitored' in homicide prior to shooting  |  Man was shot by two officers 'multiple' times  |  Man killed by IMPD officers was in-and-out of jail, convicted of 14 felonies  |  IMPD Chief: Officer-involved shooting a 'true test' of relationship between police & community

A week later, Roach recommended that Howard and Dinnsen be terminated following a unanimous finding by the IMPD Firearms Review Board that the officers’ actions “did not comply with IMPD training and policy.”

The IMPD Merit Board hearing to decide on the officers’ termination began Tuesday. Roach was called as the first witness to the stand Wednesday morning to face cross-examination from Howard and Dinnsenn’s attorney, John Kautzman.

Right off the bat, Kautzman was combative.

“You agree that we wouldn’t be here if a gun had been found in that car?” Kautzman asked.

“You’re telling me that, with all of the facts we heard yesterday, with all the danger cues they had, if he had turned on them with a gun, that wouldn’t have been reasonable [to shoot]?” Kautzman shot back.

“A slight turn does not give anyone reason to shoot,” Roach said.

“If someone turns on someone with a weapon and intends to shoot them, that’s not a forcible felony under Indiana law?” Kautzman asked.

Roach, laying out the viewpoint he would repeat throughout the rest of his questioning, said, “I have no evidence of anyone turning on anyone.”

Their initial testy response foreshadowed what became an often tense hour-and-a-half of questions by Kautzman and responses from Roach. While the questions frequently turned into a technical discussion about IMPD general orders and evidentiary standards, the thesis of both parties was clear: Kautzman arguing that Howard and Dinnsenn had multiple legitimate reasons to believe they were in immediate danger; Roach replying that he never found evidence that Bailey did anything that would have given the officers probable cause to either shoot him or believe he was about to commit a forcible felony.

“What I was looking for was, when they approached the car to begin with was there something in his pocket? Did he say, ‘I’m going to kill you?’ Was there anything other than ‘there was a slight move?’” Roach said.

Kautzman asked the chief if officers are trained that “action beats reaction?”

“Right,” Roach said. “But had they oriented themselves, they never would have had to make the split-second decisions that you’re talking about. If I walk through a door and someone attacks me, I have to make a split-second decision. If I’m dispatched here on a disturbance, I’m making a plan.”

Kautzman repeatedly asked Roach about findings by both IMPD criminal investigators and internal affairs that Howard and Dinnsen neither broke the law nor internal policies.

An audible groan could be heard in the room from officers present at the hearing when Roach said he was “disappointed” in the criminal investigators and internal affairs.

“So really, everybody else has gotten it wrong?” Kautzman asked. “The folks in St. Joseph County are wrong, the criminal investigators are wrong – everybody got it wrong except for you and your firearms review board? Am I right?”

“No, you’re not right,” Roach rebutted.

Although Roach’s testimony Wednesday primarily centered around his belief that neither Howard nor Dinnsen had probable cause, he was forced to admit at the end of Kautzman’s questioning that neither officer needed probable cause, under department policy, to be justified in shooting if they felt their lives were in danger.

“Regardless of whether they had probable cause, if they reasonably believed that a forcible felony was going to be committed on them, they would have acted appropriately in firing?” Kautzman asked.

At that, Roach’s hour-and-a-half of testimony ended with a single word: “Yes.”

The hearing was expected to continue through Wednesday afternoon and into Thursday. If the merit board determines the officers’ termination is appropriate, they will have 30 days to file an appeal of the decision.