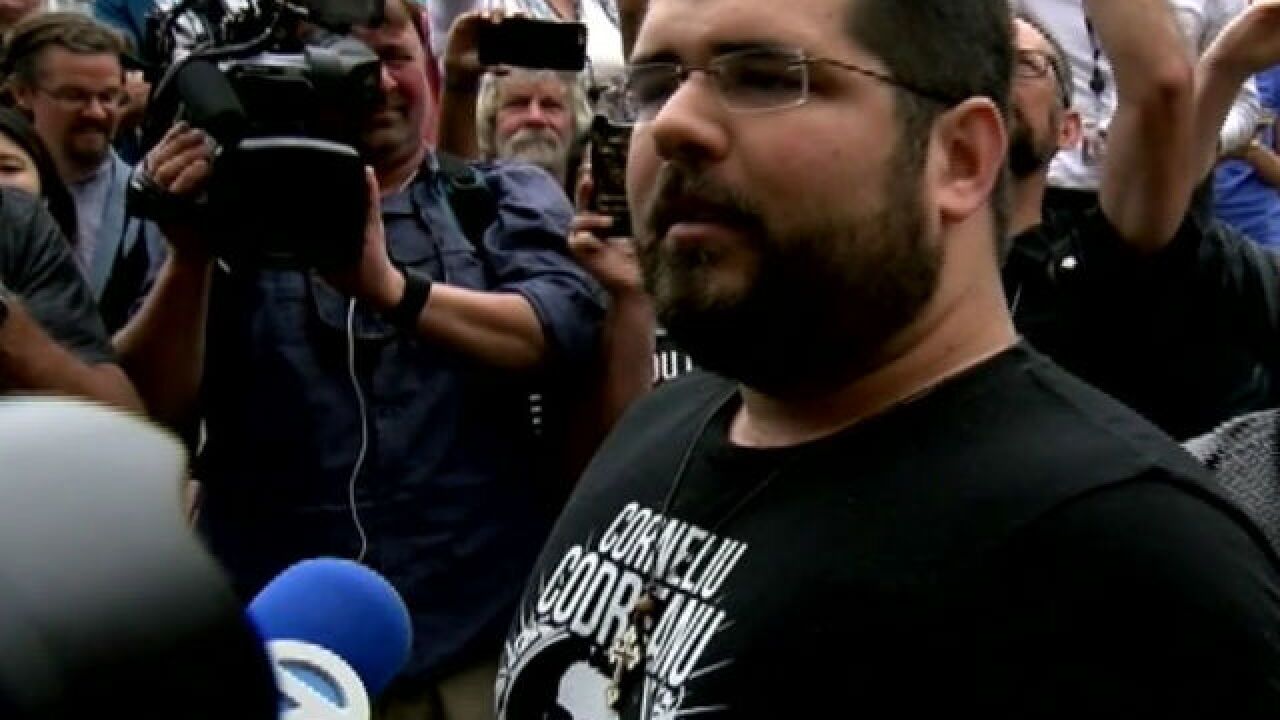 INDIANAPOLIS -- A leader of the white nationalist movement was arrested and charged with domestic battery Tuesday following an incident at his southern Indiana home.

Court records show Orange County prosecutors charged Matthew Heimbach, the leader of the white nationalist Traditionalist Workers Party, with a felony count of domestic battery committed in the presence of a child and a misdemeanor count of battery.

According to ABC-affiliate WHAS 11 in Louisville, which obtained a copy of the court documents, police were called to Heimbach’s compound in Paoli, Indiana, on a report that Heimbach had assaulted his wife’s stepfather, Matt Parrott. Parrott is also a member of the white nationalist movement.

When police arrived at Heimbach’s home, they reportedly learned Heimbach had also attacked his wife while their children watched.

Heimbach was booked into the Orange County Jail. Court records show he posted a $1,000 cash bond on Tuesday.

ALSO READ | The History of Hate in Indiana: How the Ku Klux Klan took over Indiana’s halls of power | The Dragon & the Lady: The murder that brought down the Ku Klux Klan

Heimbach was previously ordered to attend anger management classes in July 2017 when he pleaded guilty to physically harassing a female protestor at a Donald Trump rally in Louisville, Kentucky. The judge in the case, Jefferson County District Judge Stephanie Pearce Burke, waived Heimbach’s 90-day sentence on the condition that he not re-offend within two years. The new charges against him could potentially put that suspended sentence in jeopardy.

Just months later, Heimbach was one of the organizers of the “Unite the Right” rally in Charlottesville, Virginia, that resulted in the death of 32-year-old Heather Heyer when a car plow into counter-protestors.

RTV6 first reported on Heimbach in 2016, when a Call 6 Investigation questioned why the outspoken white nationalist had been hired as a case manager by the Department of Child Services. Then 24 years old, Heimbach had already appeared on Nightline for his views on white separatism.

A Call 6 Investigation found Heimbach had been terminated less than three weeks after his hire date.

The most recent incident involving Heimbach may have larger ripple effects within his white nationalist organization, according to the Southern Poverty Law Center, which tracks organizations it classifies as “hate groups.”

MORE | These are the hate groups operating in Indiana

In a post to the SPLC’s website Tuesday, the organization said it spoke with Heimbach’s father-in-law, Parrott, who told them he was leaving the group.

An initial hearing on the battery charges against Heimbach in Orange County had not yet been set. Kentucky court records show Heimbach is scheduled to appear for a review hearing on June 1 for his case from the Louisville incident.

READ MORE | Who are the American Guard: Patriotic nationalists, or skinheads in disguise?