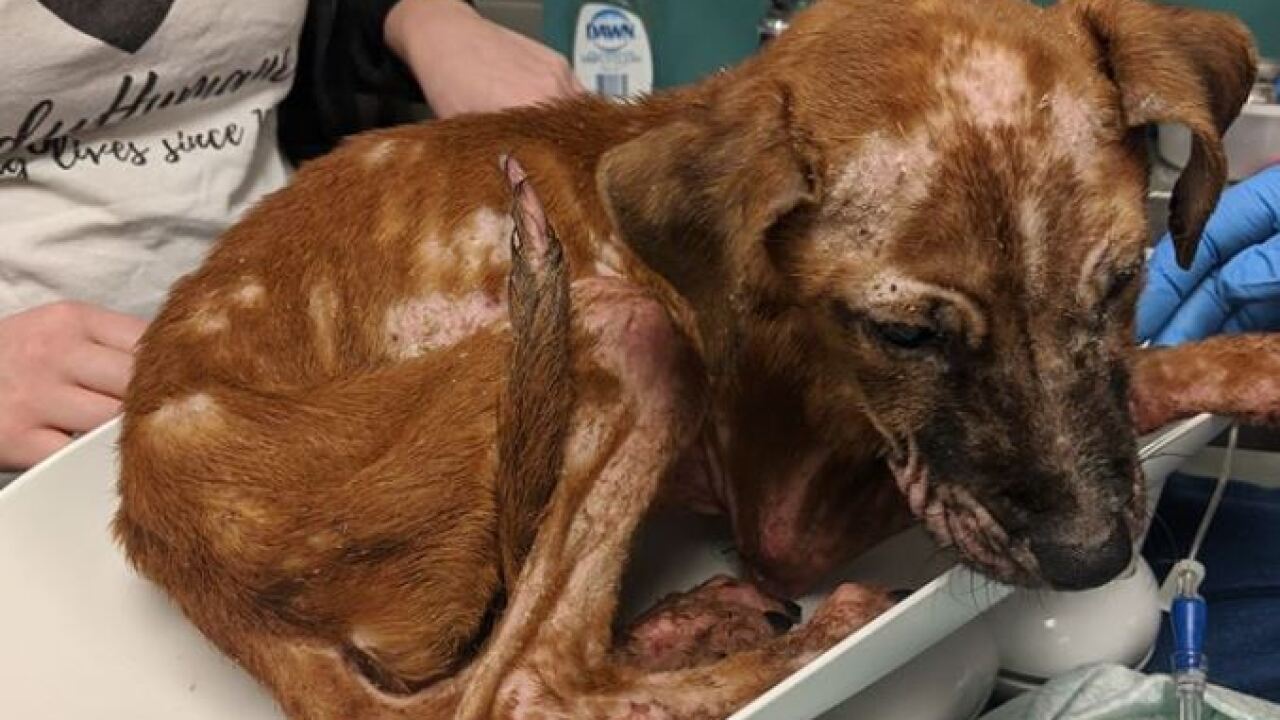 INDIANAPOLIS — Indianapolis Animal Care Services is investigating the abuse of a severely neglected puppy who was turned over to the Indianapolis Humane Society.

Indy Humane said the six-month-old puppy, named Leonard, was reported to have been tossed into a cold, dark basement and "left to wither away" after his previous owners decided they didn't want him anymore.

"Leonard has been severely neglected," Indy Humane posted on Facebook. "When he arrived at Indy Humane he was potentially hours away from death."

They described Leonard's state when they took him in as: "Every bone on his fragile frame was visible through his paper-thin skin. His body temperature was so low that it could not even be read by the thermometer. Leonard was infested with fleas and his fur had fallen off most of his body. His skin was broken open with scabs and plagued by the stench of infection. He could not stand, walk or even lift his tiny head. Leonard was weak and fading so quickly that our staff worried that he was too far gone to be saved — but our Medical Team does not give up so easily. Despite his haunting condition, there was a light in his eyes that was undeniable. He was ready to fight for his life and so was the rest of the team."

After stabilizing Leonard, the team was able to begin treating his skin and other infections. He also received emergency fluids and was "cuddled" against hot water bags to help raise his body temperature and avoid organ shutdown.

Digging deeper into his care, medical staff found that Leonard was also suffering from an upper respiratory infection and was anemic because of the amount of fleas that were infesting him.

For now, Leonard is on a strict, low-calorie diet regimen and once his condition improves they will begin treating his other conditions.

"Leonard is looking at a lengthy recovery full of medications, nutritional support, blood tests, medicated baths and more as staff dive deeper into his treatment plan. We are taking Leonard’s recovery one moment at a time, as his condition was so critical, but the prognosis is looking good," IndyHumane posted.

IACS says they have been in touch with Indy Humane and they have opened an investigation to seek justice for Leonard. Anyone with information about the case should contact Crime Stoppers of Central Indiana at 317-262-8477.

IndyHumane is also seeking donations to help cover the cost of Leonards treatment. You can get more information about that in the post below.