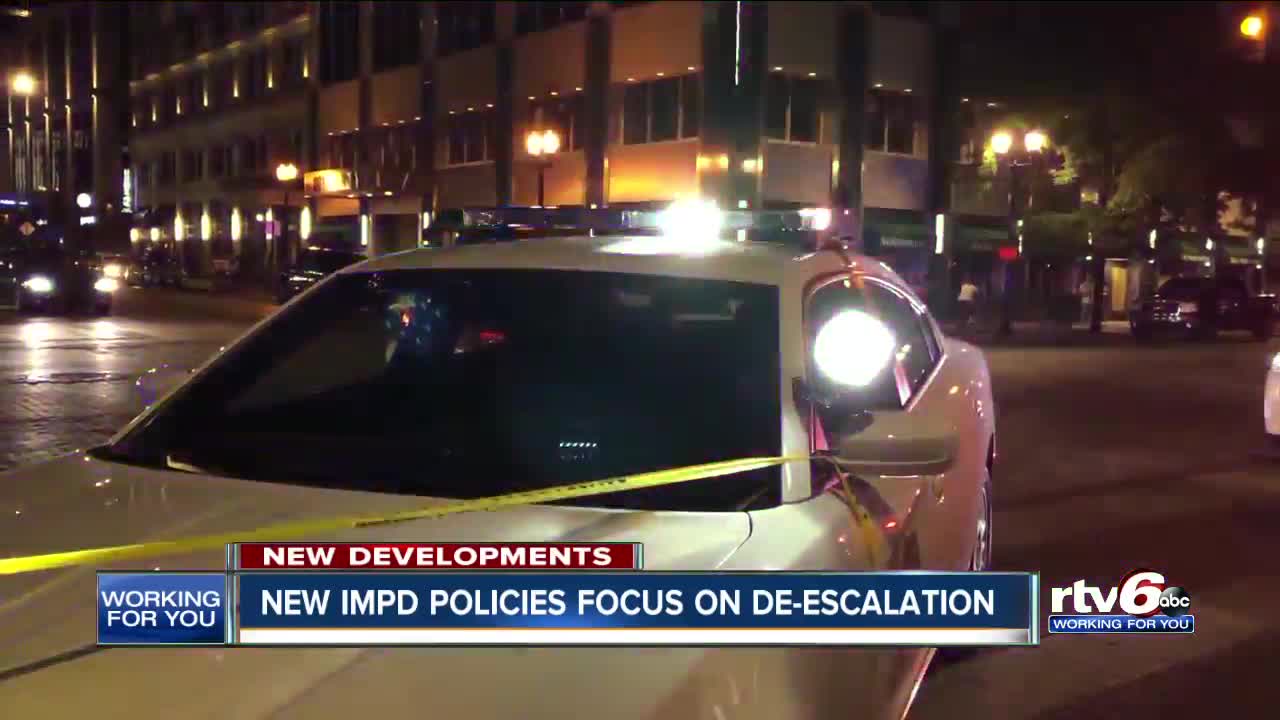 INDIANPOLIS – The Indianapolis Metropolitan Police Department has updated its use-of-force policies, focusing on de-escalation and limitation of lethal and less-lethal devices.

“The adoption of these new use of force standards is a substantial milestone, one that I hope demonstrates our commitment to building community trust and developing stronger neighborhood partnerships to address violent crime,” said IMPD Chief Randal Taylor.

IMPD is redeveloping the training curriculum in line with the new policies and will begin the process of training all officers to these new directives as soon as next month.

"I think it speaks to our efforts to be transparent, more engaged with our community and create legitimacy around what guides our police officers," IMPD Deputy Chief Kendale Adams said.

IMPD’s new policies are as follows:

3. Prohibit the use of chokeholds: While IMPD training does not consider chokeholds an appropriate technique, the approved Use of Force policy explicitly prohibits this tactic or any similar neck restraint.

4. Require the use of proportionate force: Officers must use only the minimum amount of force appropriate, based on the circumstances known to the officer, to achieve the officer’s legitimate public safety objectives.

5. Define an officer’s duty to intervene and report when inappropriate force is used: Officers now have an explicit duty to prevent or stop the use of excessive force by another officer and report any violation of the Use of Force policy to a supervisor. This was not previously outlined in IMPD’s Use of Force policy.

7. Prohibit shooting into, or from, moving vehicles.

8. Direct the department to review these policies for compliance with national best practices at least annually.

"Candidly, I made a commitment that we would update our use of force policy after the tragic death of Aaron Bailey two years ago," Mayor Joe Hogsett said. "It's long overdue."

"It would've helped with Aaron for sure," Jessica Louise, of Indy10 Black Lives Matter, said. "Part of the use of force policy that I saw was that it prohibited officers from shooting into a moving vehicle and that absolutely applied in the Aaron Bailey case."

The new duty to intervene policy requires every officer to report the use of inappropriate force. This practice could have changed the outcome in Minneapolis where three officers assisted Officer Derek Chauvin in the arrest that led to George Floyd's death.

Louise said the new policy is not perfect but is another step in the right direction.

"It is progress," Louise said. "One of our demands was for the use of force policy to be reviewed and rewritten so this is just a portion of it. The other demands still stand. We're still asking for justice in Dreasjon Reed and McHale Rose's case. So the fact that we have made progress on one demand is simply a motivation for us to press harder for other demands."