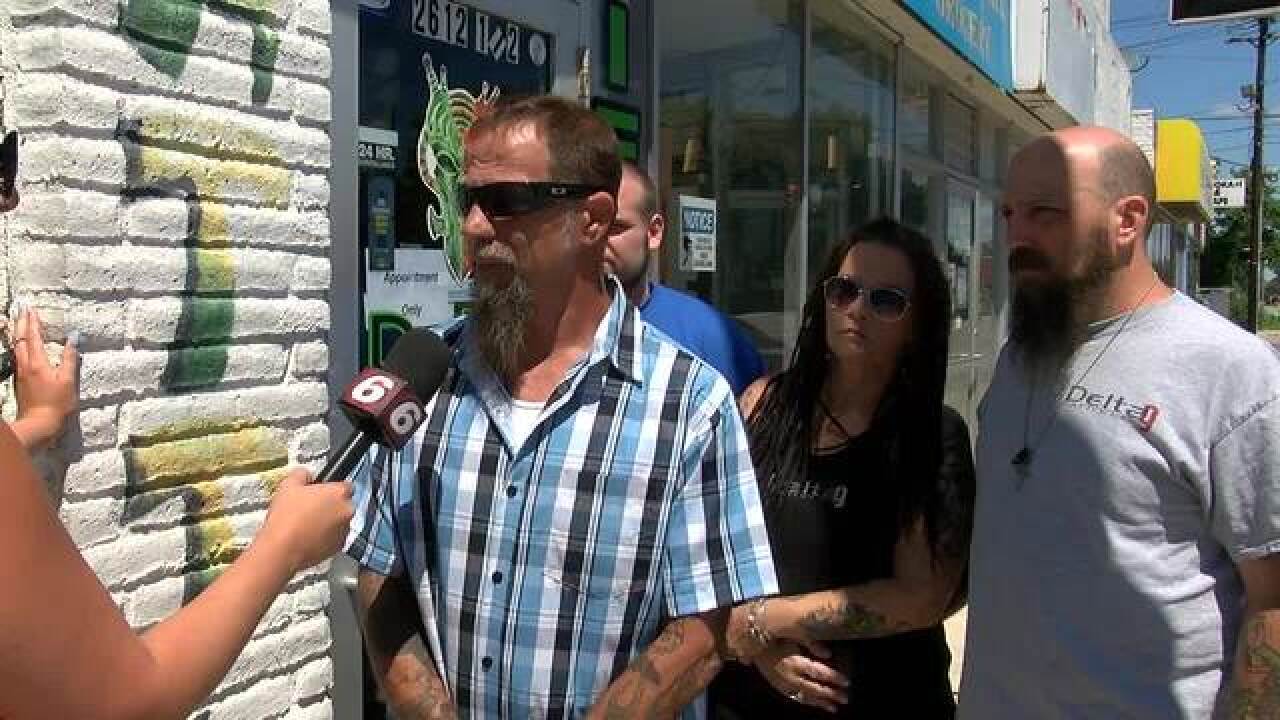 INDIANAPOLIS -- Emotions are running high at the shop where the man police have arrested in connection with the murder of a Southport lieutenant worked.

Lt. Aaron Allan was shot multiple times Thursday while responding to a vehicle accident near the intersection of Maynard Drive and Madison Avenue. He was rushed to the hospital where he later died.

Police have arrested the driver of that vehicle, Jason Brown. He was arrested on suspicion to commit murder at this time.

The owner of Delta 9, Scott Fearrin, said the backlash his shop has received since Lt. Allan's death has been frightening and hard on him and all of his employees.

He released a statement Saturday asking the community "please don't condemn us all."

“Speaking on behalf of Delta 9 Tattoo Company we do not understand what’s going on and were in no way involved or condone any activities that may have led up to this senseless act.

Condemning my business for the act of another is destroying the lives of several other people, mine included. We do respect law enforcement to the fullest and all of the first responders. Our hearts are so with Lt. Aaron Allan and his family at this time. Please don’t condemn us all.”

Fearrin said Brown texted him Thursday afternoon to ask for the day off and the last message he received from him was "Thanks, boss, you're the best."

"He seemed to be in good spirits and everything was good," said Fearrin.

It was about an hour later that Fearrin saw what had happened on the news.

Fearrin reiterated recent interviews with family members saying the shooting and entire situation was out of character for Brown and something no one who knew him would have thought possible.

"I don’t know what happened. Something went wrong, Terribly, terribly wrong. No one that knows him personally would think that this would happen," said Fearrin.

Fearrin said the tattoo community has stuck behind him and his staff, but he wants the community to know that they are trying hard to understand what happened just like everyone else is.

“The tattoo community has stuck up for me and they know that Delta 9 has no play in this whatsoever, but the community at large and social media are giving me terrible backlash about what goes on here at Delta 9," said Fearrin. "Honestly we’re just like any other tattoo shop, we do tattoos we have fun, we’ve become a family and we just don’t understand how all of this came about.”

Fearrin said he is worried about the impact the situation will have on his other workers because Brown is associated with his shop.

"This ain’t a corporation where you’re guaranteed a check we depend on the community to feed our kids. I have a great group of guys here,” said Fearrin. “They could be anywhere but they’re here for me and for the community and for the business.”

Although he knows Brown well, Fearrin said he would rather focus his thoughts on Lt. Allan and his family, instead of the man who is suspected of killing him.