Shortridge: How a now-charged IMPD officer's report differed from what the video showed 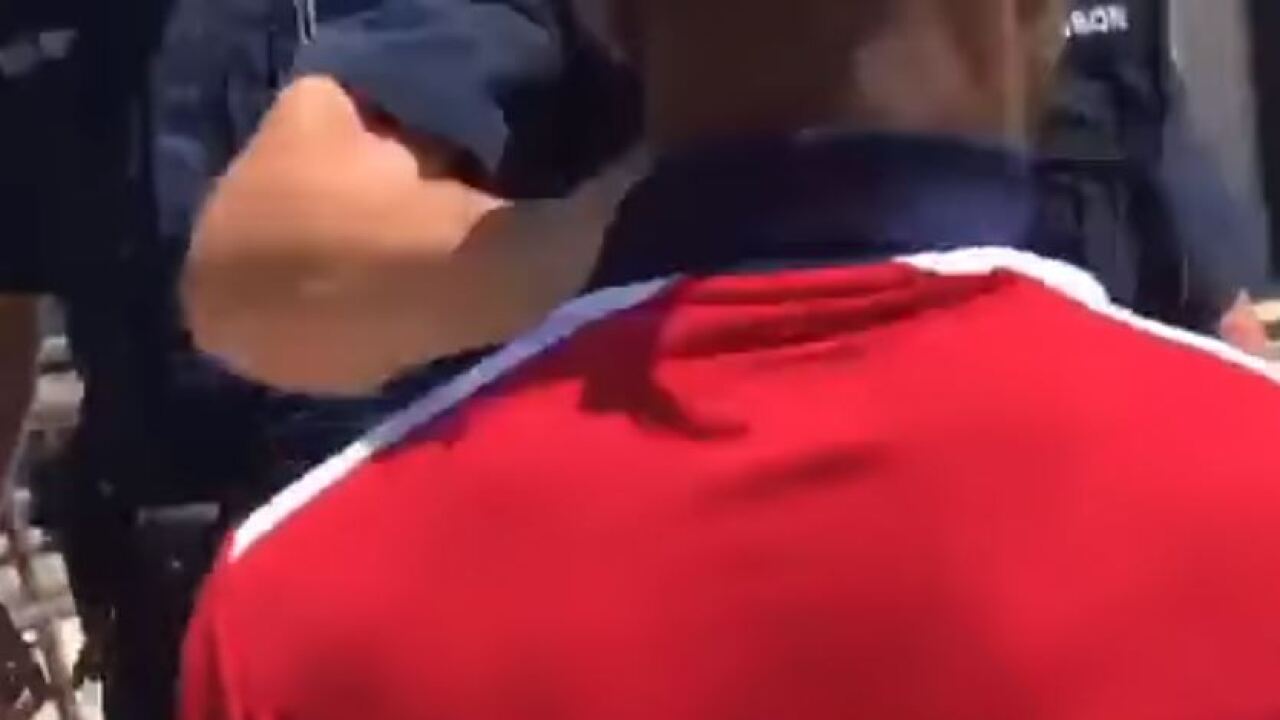 RTV6 screenshot
A video posted to social media appears to show an IMPD officer striking a boy in front of Shortridge High School.

INDIANAPOLIS — New court documents detail the differences between what an Indianapolis police officer wrote after an altercation at Shortridge High School and videos taken of the incident.

Indianapolis Metropolitan Police Department Officer Robert Lawson was charged Monday after he was accused of making false statements on a probable cause affidavit.

Lawson was charged with obstruction of justice, perjury, false informing and official misconduct connected to the official document he wrote connected to a physical altercation involving a 17-year-old Shortridge High School student on Aug. 29. Lawson was also charged with battery for allegedly striking the student "without a legitimate concern for self-defense," a release from the Marion County Prosecutor's Office states.

In Lawson’s probable cause, he wrote that the 17-year-old’s (identified as both CW and AW below) hands were balled into fists, but the video shows the teen’s left hand open, and right hand not in a fist. The teen’s right hand then becomes obstructed, according to the new court document.

Lawson also wrote that he hit the 17-year-old with an “open hand palm strike,” but the video shows Lawson striking the teenager with a closed fist, the investigator writes.

Lawson then wrote that the strike was successful, and officers were able to cuff him without further force, but the video shows further physical conflict between Lawson and the 17-year-old. The new document states Lawson also struck the teen in the abdomen with his knee.

"These statements are believed to be false and contrary to video evidence which appears to show Officer Lawson striking the juvenile with a closed fist and continuing to use force including a knee strike to the juvenile’s abdomen or chest area," the release states.

Lastly, Lawson wrote that a second officer said she saw the teen swing his fist at him, but didn’t make contact with Lawson. The investigator interviewed the second officer, who said she never told Lawson she observed a swing by the teenager.

Lawson has been suspended without pay since the release of the videos.

In the police report and probable cause affidavit, Lawson states: Officer Lawson advised her that she would be arrested for disorderly conduct if she did not stop. [Pointer] continued and Officer Lawson told [Pointer] to put her hands behind her back
In the video Lawson says "Do you want to go to jail?" "Do you want to go to jail? Let's go." He then reaches for Pointer who pulls her arm away and walks away.

In the police report and probable cause affidavit Lawson states: CW face was clinched in anger and both hands were balled into fist.
AW's face cannot be seen from the angle of any video viewed. AW' left hand is open and not a fist. As AW's right hand drops it is not to a fist. It then becomes obstructed by a stair rail and DP's leg.

In the police report and probable cause affidavit Lawson states: Officer Lawson fearing that CW was about to strike him, threw an open hand palm strike
In the video, Lawson strikes AW with a closed fist with a protruding thumb, not a palm strike.

In the PC Lawson states: The palm strike was successful and knocked CW around and officers were able to cuff CW without any further force.
The video shows after the initial strike that Lawson maneuvers AW into a clinch by placing his left hand behind his neck and pulling down and then controlling AW's shoulder with his right hand. Lawson then delivers a knee strike to AW's abdomen/chest area. It is after that strike that AW goes to the ground as Pointer intervenes.

In the PC Lawson states: Sergeant Jenkins who was next to Officer Lawson and CW during the incident stated she observed CW swing his fist at Officer Lawson a split second before Officer Lawson threw the palm strike, however CW did not make contact.
In an interview Jenkins stated that she was by the front door of the school when the incident occurred. In the video Jenkins can be observed standing by the doors that enter Shortridge High School. Sgt Jenkins also stated that she did not tell Lawson that she observed AW swing his fist as he stated in the police report/probable cause affidavit.