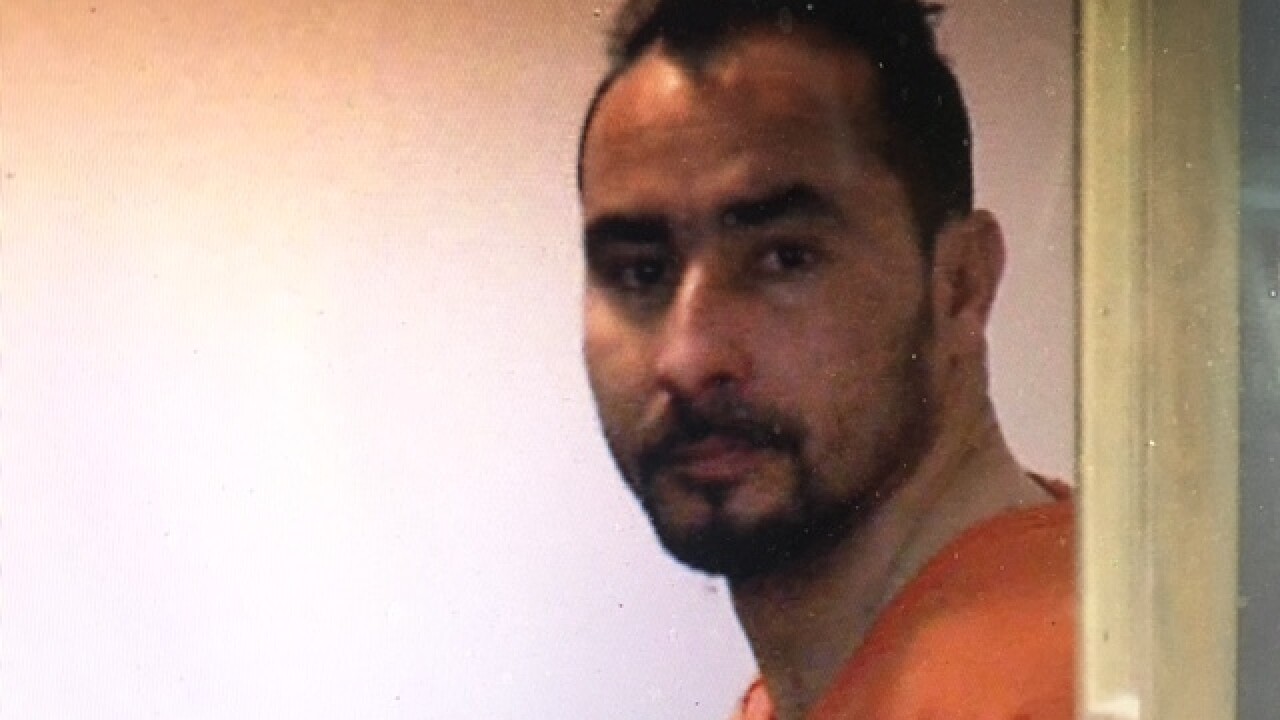 INDIANAPOLIS -- Mere hours after a crash killed a Colts player and his Uber driver, the man suspected of driving drunk and causing it showed "no concern or remorse" for the victims, prosecutors allege.

Manuel Orrego-Savala, 37, is accused of crashing into a car parked on the side of I-70 early Sunday morning, killing Indianapolis Colts linebacker Edwin Jackson, 26, and 54-year-old Jeffrey Monroe.

Indiana State Police say Orreg0-Savala is in the United States illegally, and he had been previously deported in 2007 and 2009.

At a court hearing Tuesday morning, Orrego-Savala, through a court interpreter, said, "I wasn't driving the car. I don't know why I am here." The judge responded by saying it would be sorted out in court.

Wednesday morning, the Marion County prosecutor's office filed formal charges against Orrego-Savala. He faces two counts of causing death when operating a motor vehicle with an ACE of .15 or more and two counts of failure to remain at the scene of an accident.

The prosecutor's office wants a DNA sample from Orrego-Savala because he claims he was not the driver involved in the deadly crash.  They want to match the DNA to a substance, believed to be blood, that was found on the airbag of the vehicle Orrego-Savala was allegedly driving

Bond for a drunk driving suspect in a similar case would be $40,000, but since Orrego-Savala is considered a flight risk, his bond was set at $200,000 at an initial hearing Wednesday morning.

Ryan Mears, Chief Trial Attorney for the Marion County prosecutor's office says they will treat this case as they would any other, despite comments from President Trump or Orrego-Savala's immigration status.

Orrego-Savala's next court appearance is scheduled for March 27.

PREVIOUS | Suspect in crash that killed Colts player was in U.S. illegally, had been deported twice

Police say Edwin Jackson was the passenger in an Uber when he got sick at around 4 a.m. Sunday. The driver, Jeffrey Monroe, pulled over in the westbound lanes of I-70 near Holt Road to help him. Both men were outside the car when a black Ford F-150 drove into the shoulder and struck the vehicle. Jackson and Monroe were pronounced dead at the scene.

Orrego-Savala, the suspected driver of the F-150, first fled the scene on foot, according to the probable cause document. Indiana State Police troopers located him on the ramp to Holt Road and stopped him, at which point he reportedly admitted he was the driver of the truck. A portable breath test administered at the scene determined Orrego-Savala’s BAC to be 0.239 percent – three times the legal limit.

So disgraceful that a person illegally in our country killed @Colts linebacker Edwin Jackson. This is just one of many such preventable tragedies. We must get the Dems to get tough on the Border, and with illegal immigration, FAST!

My prayers and best wishes are with the family of Edwin Jackson, a wonderful young man whose life was so senselessly taken. @Colts

Marion County Prosecutor Terry Curry said the crime will be prosecuted "like any comparable crime," criticizing the President's tweets. His full statement:

“We will vigorously prosecute this matter, just like any comparable crime, not because of the immigration status of an accused, but because two innocent men lost their lives in this horrible incident. We are disheartened that ghoulish and inappropriate public commentary has politicized this tragedy. Much of such commentary, including tweets by the President, fails to acknowledge that both Edwin Jackson and Jeffrey Monroe lost their lives on Sunday. We will simply seek justice on behalf of the families of those two victims.”