Donald Trump tweets about getting Carrier to stay in Indiana 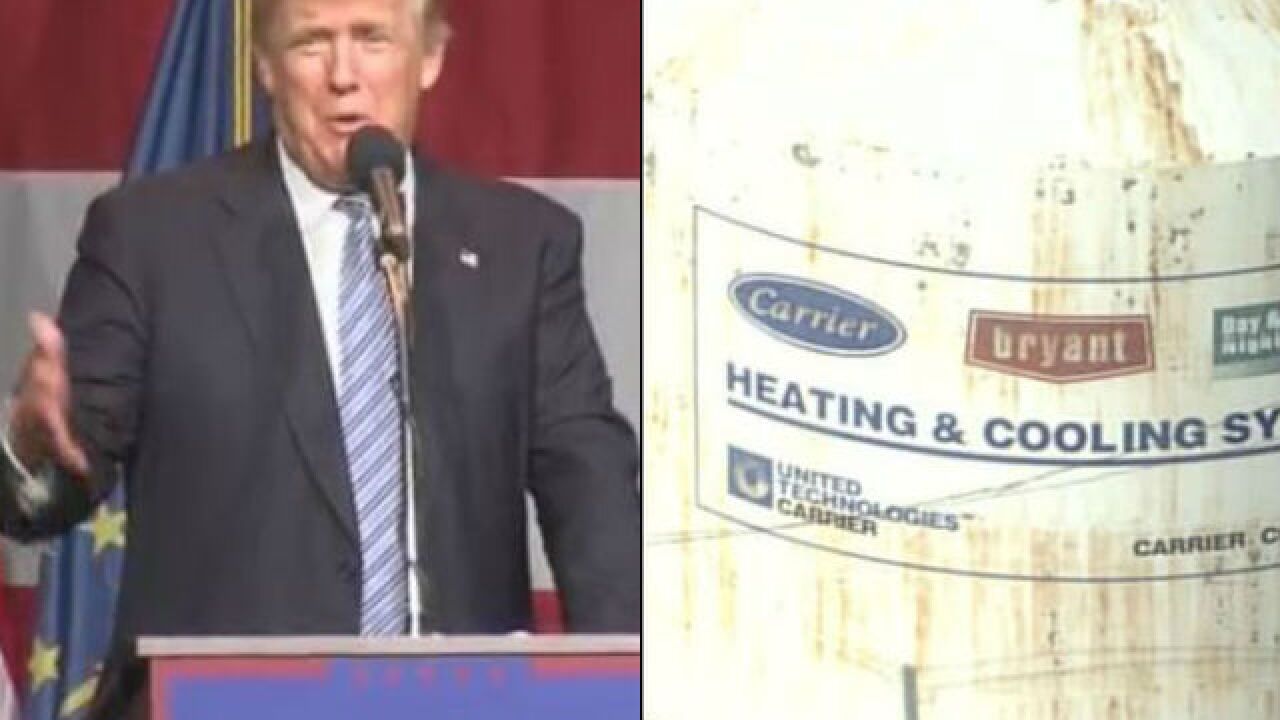 INDIANAPOLIS -- President-elect Donald Trump is talking about Indiana and Carrier again, this time in a tweet.

Just after 10 a.m. Thursday, he tweeted that he's working -- even on Thanksgiving -- to get Carrier to stay in Indiana.

I am working hard, even on Thanksgiving, trying to get Carrier A.C. Company to stay in the U.S. (Indiana). MAKING PROGRESS - Will know soon!

In February, Carrier announced it was moving production from a west-side plant to Monterrey, Mexico, taking 1,400 jobs with it.

Carrier has had discussions with the incoming administration and we look forward to working together. Nothing to announce at this time.

Trump made frequent references to Carrier while campaigning for president, saying Carrier would "pay a damn tax."

PREVIOUS | Trump on Carrier: You're gonna pay a damn tax

He said that if he were president, Carrier wouldn't be leaving in the first place. He's said Carrier would pay a 35 percent tax on imports to the United States.

"I will call the head of Carrier and I will say, I hope you enjoy your new building," Trump said. "I hope you enjoy Mexico. Here's the story, folks: Every single air conditioning unit that you build and send across our border – you're going to pay a 35 percent tax on that unit."

We are going to bring steel and manufacturing back to Indiana!

IU McKinney School of Law Professor James Nehf says a President Trump could potentially put a tariff on all air conditioners made in Mexico, but not just on one company.

"They're almost always imposed on classes of goods," Nehf said. "You could impose tariffs on wine coming from the European Union, but you wouldn’t just impose a tariff on a specific wine producer."

Pence's campaign says the governor made sure Carrier's parent company refunded more than $1 million in tax credits and grants to the state, and secured the future of 400 research and development jobs in Indiana. It's not clear if the 400 jobs Carrier will keep in Indiana were ever marked to be moved to Monterrey, Mexico.

The union that represents Carrier hasn't shown Trump the same level of love that he's shown it.

It endorsed Democrat Sen. Bernie Sanders for president during the Indiana primary, and backed John Gregg for governor.

"[Pence] and Trump would be a hell of a team," Chuck Jones, of the United Steelworkers Union Local 1999, said. "All we need is a circus tent up – a couple of elephants – hell of a circus going on."

Some of the Carrier workers were featured on "The Daily Show," going as far as to call Trump a "crook."

Carrier announced in February that 1,400 jobs from their west-side manufacturing plant would be moving to Monterrey. A video of the announcement went viral, triggering outrage from as high up as Donald Trump. It also became the focus of multiple Call 6 Investigations, prompting special reports. You can find all of those stories here.