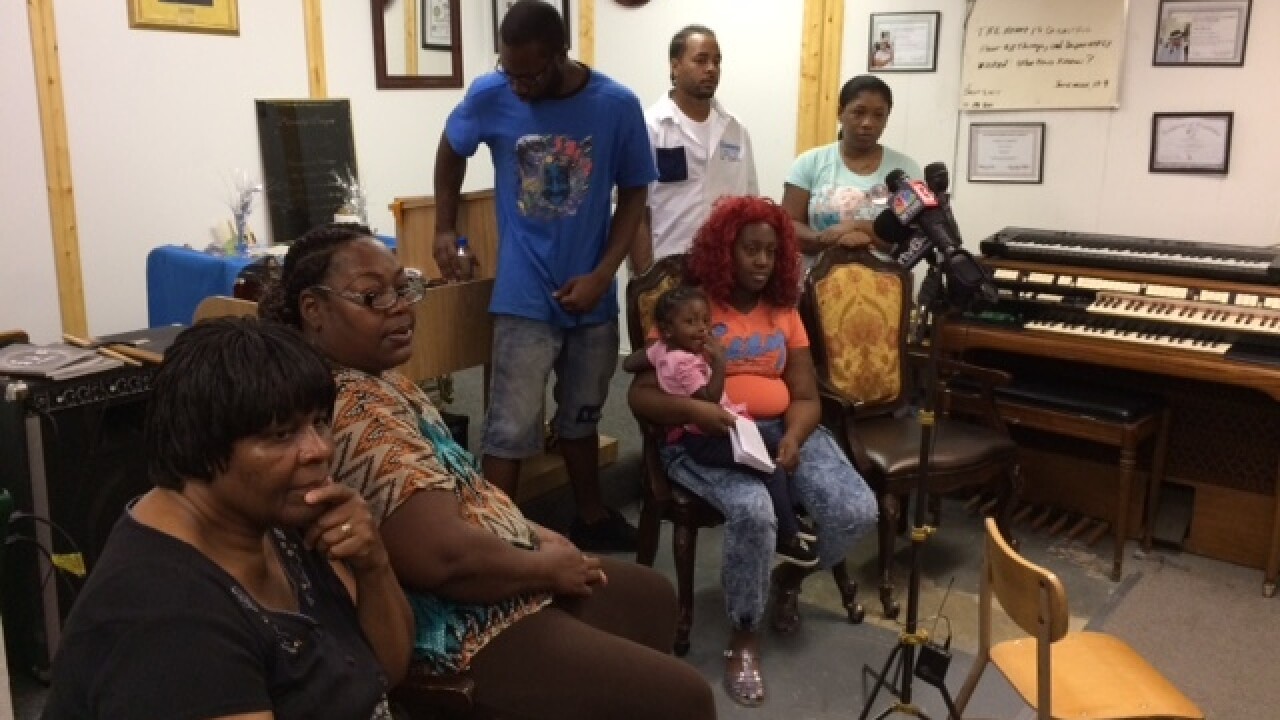 The family of a man killed by officers with the Indianapolis Metropolitan Police Department is suing the city of Indianapolis.

Donte Sowell, 27, was killed in January when IMPD officer Javed Richards opened fire. At the time, IMPD said Sowell shot at Richards first, but the lawsuit disputes that.

"Mr. Sowell's many gunshot wounds confirm that he was shot from behind," Sowell family attorney Ruth Brown said in a statement. "Witnesses confirm that he was unarmed and had surrendered to police at the time he was killed. The police recovered no gun from Mr. Sowell, even though they were the first people to reach him after having killed him."

It was reported that a private security guard saw the incident and joined the IMPD officer in the "intense firefight."

The family is also suing a security firm and the property management firm that employed them.

Police said Richards was shot in the foot, while Sowell was shot multiple times and was taken to Eskenazi Health in critical condition, where he was later pronounced dead.

"Within hours of the shooting, police spokespersons falsely claimed that Mr. Sowell had initiated a 'gun battle' with them," Brown said. "Those claims are a fiction invented to justify shooting an unarmed father of four in the back."

The report states six gunshot wounds were found on Sowell's body. The fatal shot was determined to have entered in the right mid/lower back and struck Sowell's liver and right lung.

Sowell's blood tested positive for the presence of THC, the active ingredient in marijuana, but no other drugs or alcohol.

Officials said at the time an IndyGo bus and several cars were riddled with bullets at the scene of the shooting. Crime lab investigators said at least 15 rounds were found embedded in Richards' patrol car, which he used for cover during the shooting.

The release announcing the lawsuit said that police never recovered a weapon from Sowell's body. It also says the department has refused to the family's requests for police reports, ballistics tests and police radio transmissions.

"On the night of January 15, 2015 IMPD Officer Javed Richards encountered an armed suspect that ran from a car during a lawful traffic stop. Unprovoked, Sowell fired his gun first at Officer Richards. Officer Richards subsequently engaged in a heavy gun battle with Sowell that resulted in the officer sustaining a gunshot wound to the foot.

Contrary to the allegations in the complaint, a stolen handgun was recovered from Sowell at the scene.  Additionally, a laboratory test performed by the Indianapolis-Marion County Forensic Services Agency showed that Sowell fired at least thirteen (13) shots at the officers during the gun battle.

During that gun battle, a civilian security officer came to the aid of the officer after the officer had been shot.  Shots fired from Sowell’s gun produced heavy damage to both Officer Richards’s police vehicle and an IndyGo bus.  The bus, which was behind Officer Richards, sustained a shattered window that nearly missed a mother, small infant and a bus driver who were on the bus at the time of the shooting.

At the time of this incident no officers were equipped with any Body Worn Camera devices.  The facts in this case will clearly show that the officers’ use of force was reasonable to prevent death or serious bodily injury to themselves and others, and the City of Indianapolis plans to aggressively defend this baseless lawsuit."

Investigators said Sowell had a previous arrest in Marion County on his record for dealing in a narcotic drug, drug possession, criminal confinement, carjacking, auto theft, carrying a handgun without a license and armed robbery.

Police said Sowell was wanted on a misdemeanor warrant for possession of marijuana.