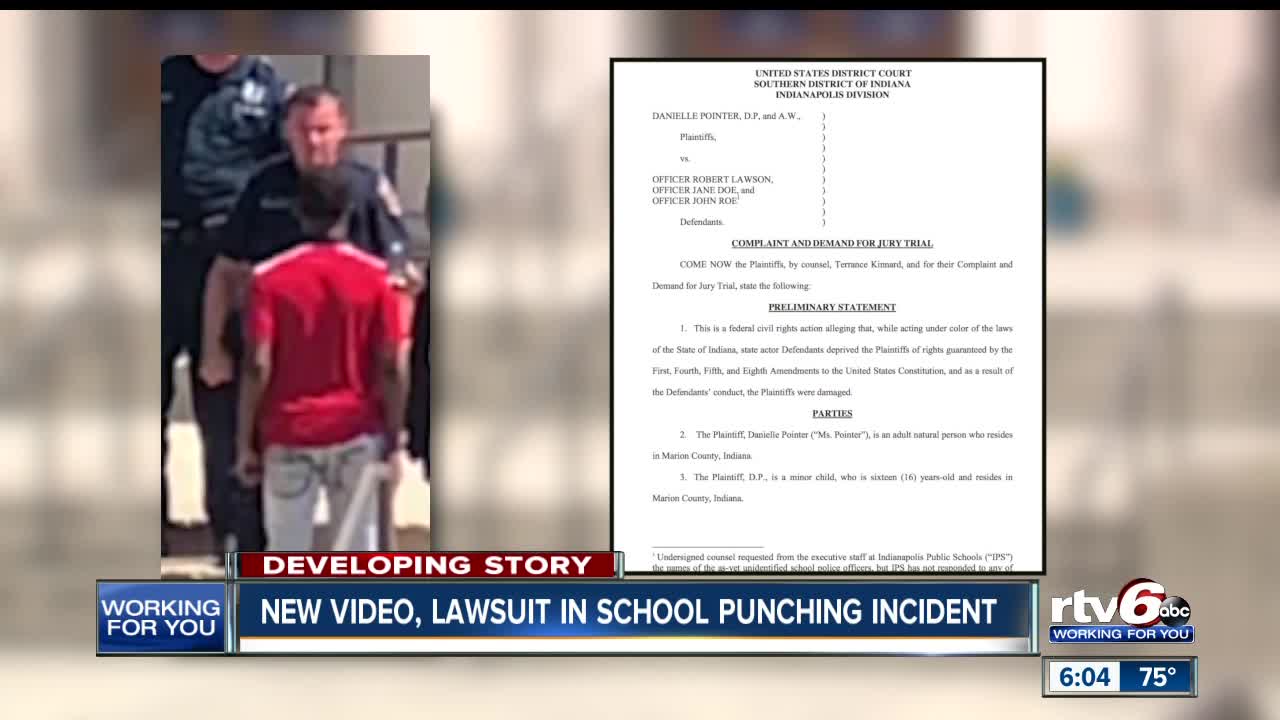 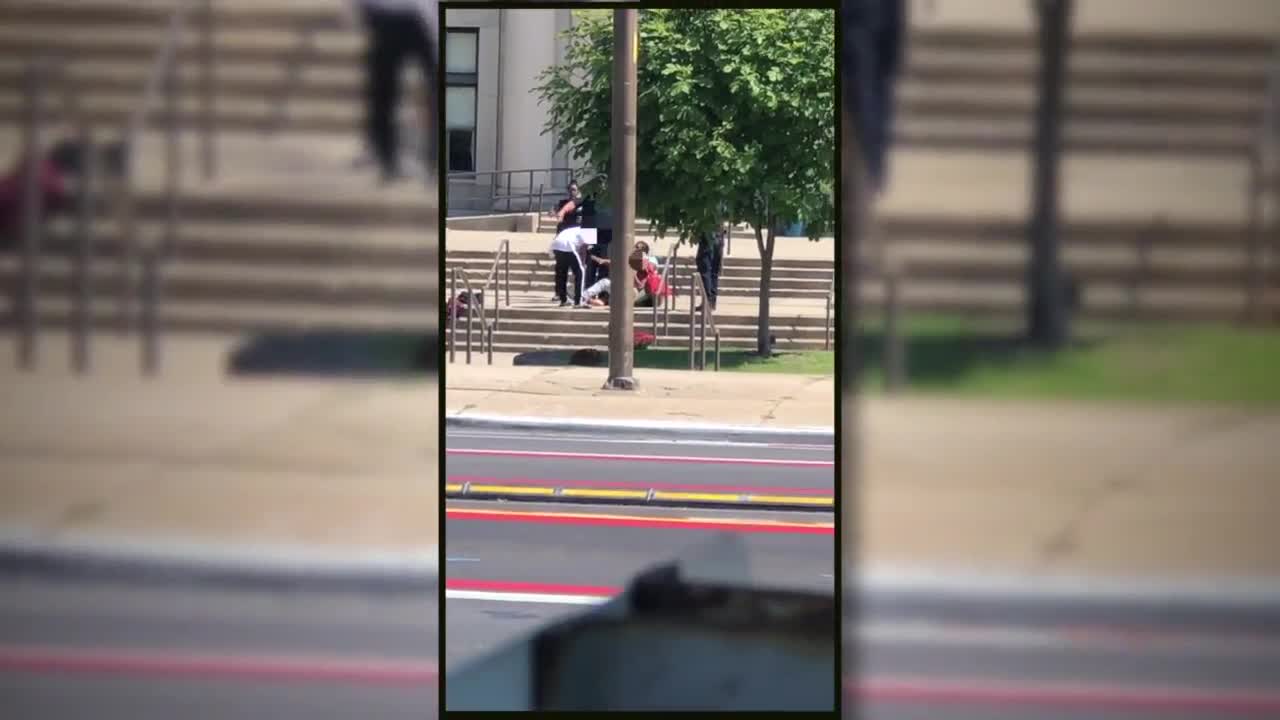 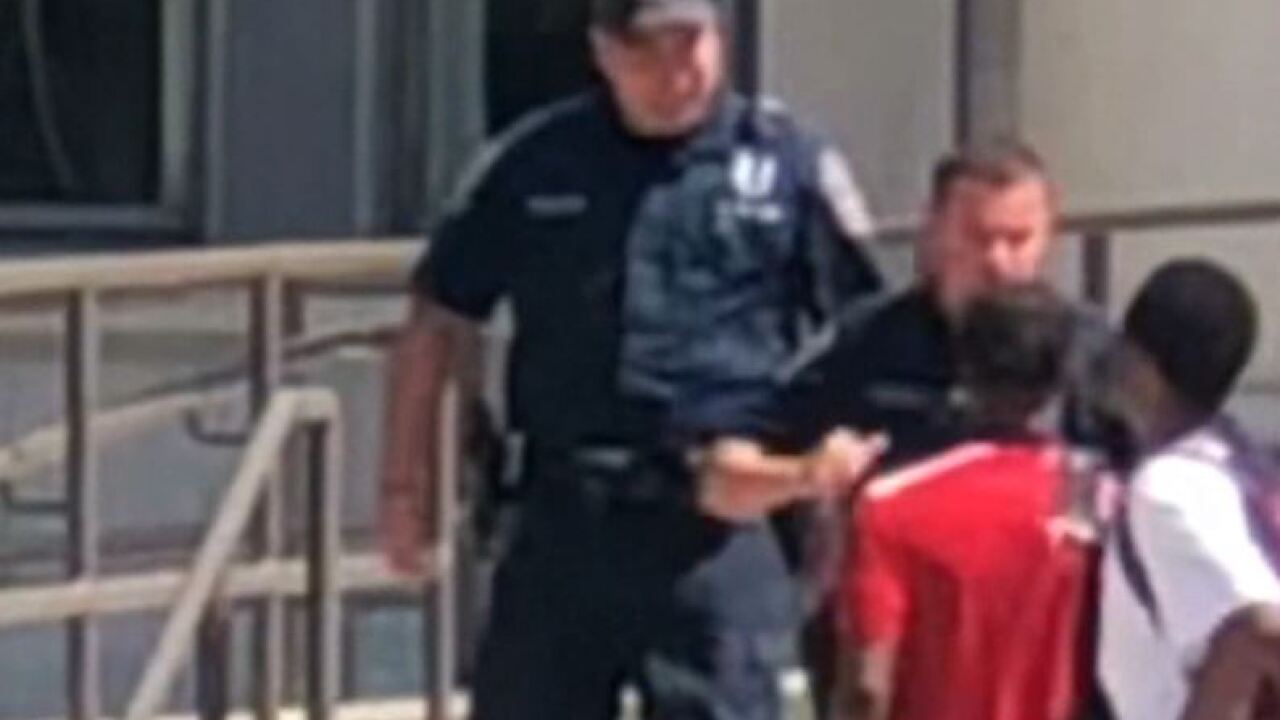 INDIANAPOLIS — The family of a student who was struck by an Indianapolis Metropolitan Police Department officer outside Shortridge High School last month has filed a lawsuit against the officers involved.

The lawsuit, filed Wednesday by Kinnard and Scott in the United States District Court for the Southern District of Indiana, seeks actual and compensatory damages, punitive damages, attorney's fees, litigation costs and expenses and "other appropriate relief."

The lawsuit names Danielle Pointer and two male students — who are related by blood — as the plaintiffs and IMPD Officer Robert Lawson and two unnamed Indianapolis Public Schools officers as the defendants. The attorney's note says they have requested the names of the officers on two separate occasions (Sept. 2 and Sept. 4) but have not received a response. "We intend to get the identities through a subpoena and then amend the Complaint to reflect their true names," the attorney said in a statement to RTV6.

The lawsuit describes the incident that took place outside Shortridge High School around 1:30 p.m. on Thursday, August 29. Video of the incident, which has been circulating on social media for several days and was provided by the family's attorney, appears to show Lawson striking one of the teens in the middle of a heated argument.

The Indy Fraternal Order of Police on Thursday released a statement:

Appropriate review about the actions of everyone involved in this matter is underway. Collectively, we must ensure that all the facts are gathered related to any such incident. We value a full review and fair process for everyone involved and appreciate due diligence in gathering all the facts and circumstances surrounding this event. During this period, we ask that members of our community including various leaders and trusted voices refrain from speculation, conjecture or statements that may appear to prejudge or compromise the review process. In the interim, our Indianapolis police officers remain committed to protecting our city in ongoing service to our residents and visitors.

In the lawsuit, the plaintiffs claim Lawson punched that student in the face and then placed him in a headlock and kneed him in the abdomen.

That lawsuit claims the events outside the school culminated after an altercation involving one of the students earlier in the day, during which an IPS officer used a can of aerosol spray to break it up. That incident led to a lockdown at the school and IMPD was called to send assistance to the IPS officers involved and the handling of the two students outside.

Following the incident, the lawsuit claims Lawson "falsely" wrote in his police report that he had delivered an "open palm" strike to the student.

The family's attorney also released a new video of the incident that was shot by a nearby bystander from a different angle.

The faces of the students involved have been blurred to protect their identity.

You can watch the original video from the incident below.