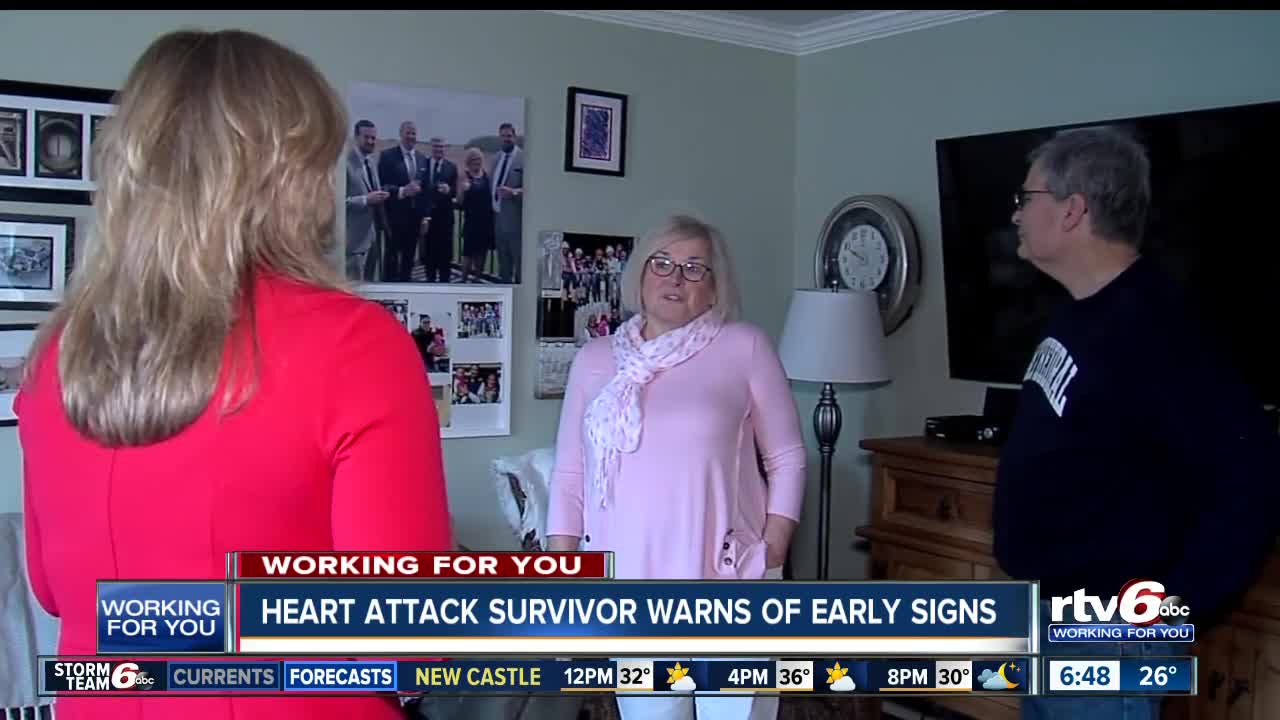 As we continue to observe American Heart Month, this is a story of how a woman survived a brush with death and now her story can help you be more aware of your heart health.

February is American Heart Month, and the American Heart Association is using its Go Red for Women initiative to increase women’s heart health awareness. RTV6 has partnered with the AHA to give you the information you need to take charge of your heart health all month long. To learn more about Go Red for Women, visit goredforwomen.org, or visit theINDYchannel.com/gored for more of our coverage.

INDIANAPOLIS — Last November, on a Saturday morning, Pam and Jerry Noblet were at home watching high school football when Pam felt an achiness in her shoulder area.

At first, Pam thought she'd just pulled a muscle, and then she felt pain in her jaw — that's when she told her husband she needed to go to the emergency room.

Only 20 minutes later, Jerry stood in the doorway of his wife's hospital room and watched as her heart stopped.

"It was so fast ... One of the nurses just came over and started doing CPR, and I thought, oh my god," Noblet said. "And then you could see on the screen there was literally no heartbeat at all and I thought ... I don't remember saying, 'I love you' today."

But he did remember the night he met her. He knew right way Pam was the one.

"I told her that night, I said, 'yeah ... here's the girl that I'm going to marry.' And sure enough, that's what happened," Jerry said.

The two have spent more than 40 years together, becoming parents, then grandparents.

Pam suffered a heart attack and a broken rib from compressions, but she lived. And now, this is how she and Jerry start their days:

Pam is still recovering and has to relax more than she'd prefer.

"You know, to sit and watch your husband ... clean the dishes or ... you know he loads the dishwasher wrong," Pam said.

But, Pam says there are so many other things he does right, like saying 'I love you' each and every day.

"Maybe ten times a day ... because you never know, life is so short," Pam said.

The couple hopes Pam's experience, as scary as it was, reminds other women to have their hearts checked and pay attention when something doesn't feel right.