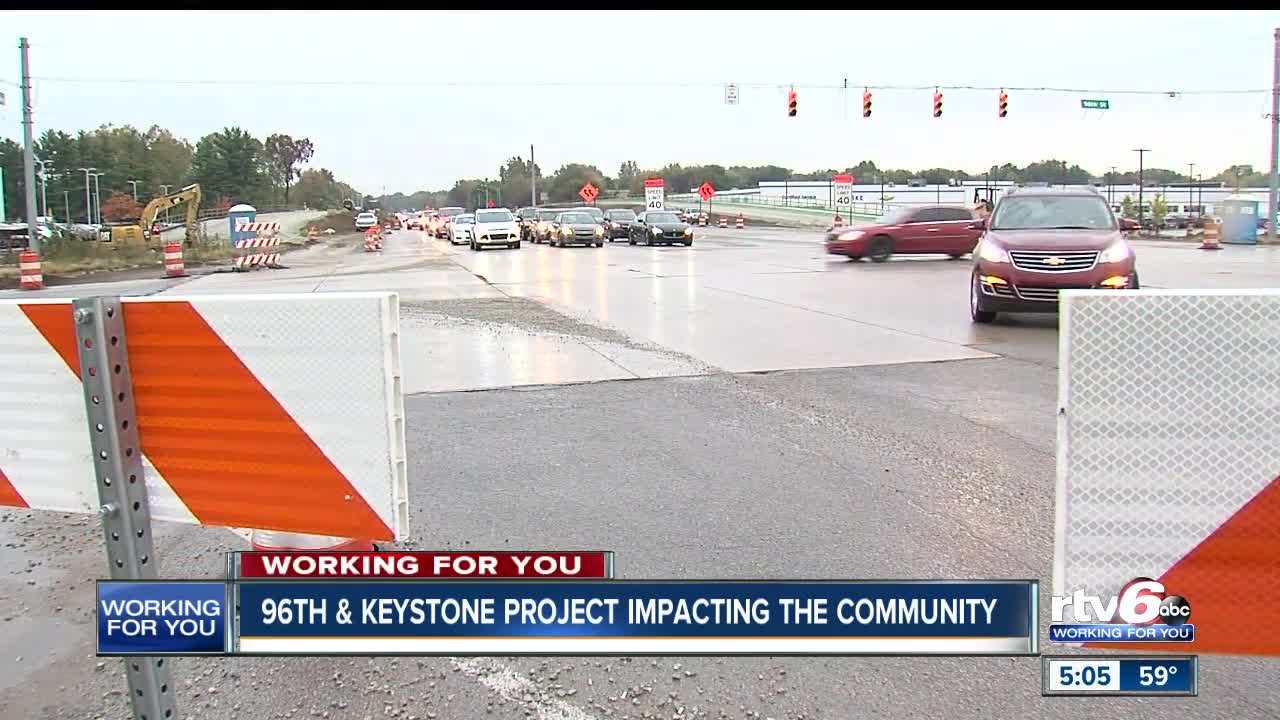 Construction has been underway for a couple of months for the major 96th Street and Keystone Parkway Interchange project. We take a look at work progress and business impact.

CARMEL, Ind. -- Work has been underway on that major 96th Street and Keystone Parkway Interchange project in Carmel for months, a project transforming the traffic signals into a lifted roundabout.

But, all of that construction has made an impact not only on the roads, but also on the community.

"It affects you a lot!” Fishers resident Judith Coons, who frequents the area for her hair appointments and shopping, said.

"What you see right now Is what you get through the winter time, as far as traffic goes," said the City of Carmel Director of Engineering Jeremy Kashman.

"The main focus this year was working on those exit ramps and then the bulk of the construction will be next year when we start building the bridge,” said Kashman.

He continued, “Everything is progressing along, we still have some utilities that need to be relocated, you can see behind me there are some power lines. That will start taking place here in the next month or so.”

He also said this is a project that was crucial to safety in the community.

“But this was also one of the most dangerous intersections in the whole state, so once the interchange is constructed it will be great, positive traffic flow in terms of safety,” said Kashman.

In order to make the project happen, some businesses had to close.

"We had four parcels that we had to purchase," Kashman said. "We had an old Burger King and it actually shut down because traffic was so bad in the area. The Marathon gas station behind us here, and also, there was a Chase bank south of the Marathon that has also been taken down as well."

The fourth shop that had to close was the McDonald’s on the corner.

Other shops along the construction route, such as Waxing the City on 96th Street haven't closed, but business has been impacted, as all of that road work does create some congested traffic.

"A lot of our clients have been late or we've had to reschedule them because they've been too late. We can't get them in because of the traffic,” said Sarah Wicker, who is the manager of Waxing the City.

That tardiness isn't limited to just the customers, even employees get stuck in the jam.

"Sometimes they're late or sometimes we have to block out their schedule,” said Wicker.

Residents say the key element to getting around is planning ahead.

“You have to allow a lot more time when you go someplace,” said Coons.

Though it's a hassle now, the end result is worth it.

The hope is for the project to wrap up completely by the end of next year.

Kashman said he would recommend drivers using alternate routes, such as onto U.S. 31 instead of Keystone Parkway, to avoid any major delays during the construction period.