IPS teachers used to make too much for subsidized teachers village. Now 500+ may qualify. 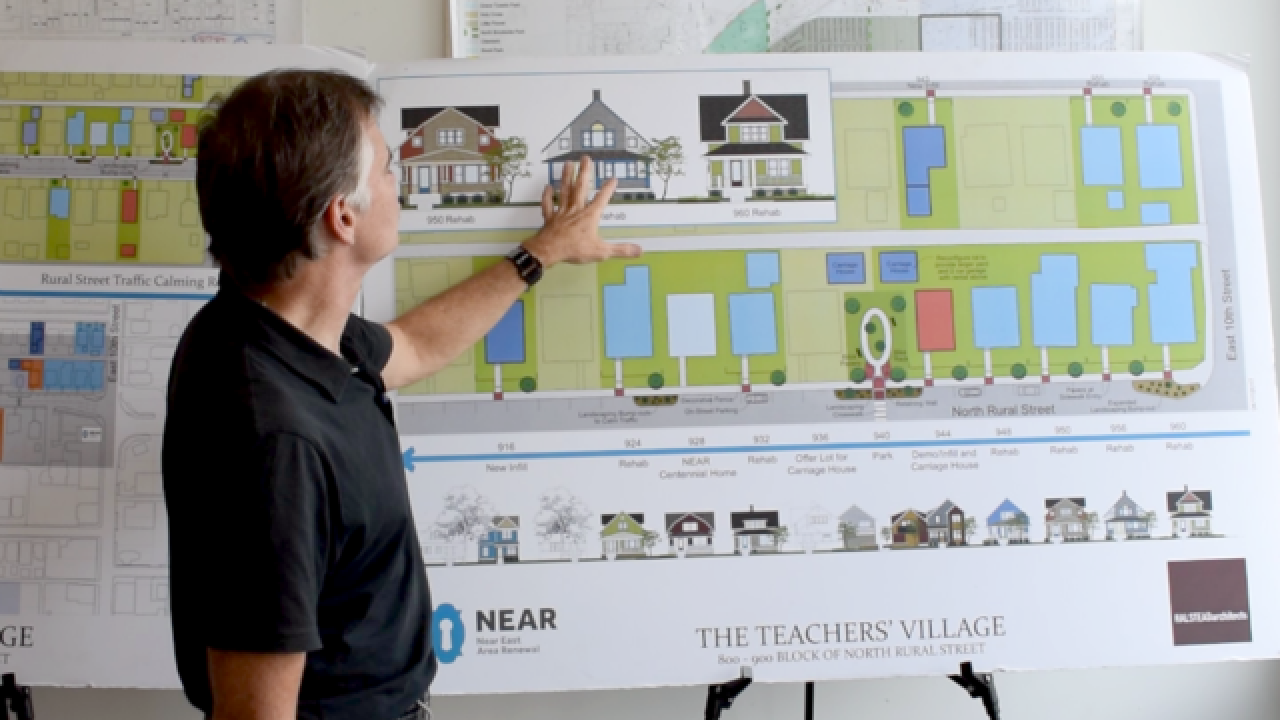 Copyright 2017 Scripps Media, Inc. All rights reserved. This material may not be published, broadcast, rewritten, or redistributed.
Jordan Fischer
<p>NEAR Executive Director John Franklin Hay goes over plans for a teachers village at the intersection of 10th and Rural streets.</p>

INDIANAPOLIS -- A change by the Department of Housing and Urban Development this month means more than 500 previously ineligible Indianapolis Public Schools teachers could now qualify for a home in the Near Eastside’s teachers village.

The project, announced by Near East Area Renewal (NEAR) last September, aims to address IPS’ teacher-retention problem by providing affordable housing options in the city’s urban core. It comprises 22 houses planned near the area of 10th and Rural streets. As of Thursday, construction and/or renovation on six of those houses had been completed.

Because the teachers village was financed with $3.1 million in HUD New Markets Tax Credit and HOME Investment Partnerships Program funding ($2.6 million from the Indianapolis Neighborhood Housing Project and $560,000 from the city’s Department of Metropolitan Development), qualified applicants must make less than 80 percent of the median area income to receive a discounted price, or no more than 120 percent of median area income for the break-even rate.

Until this month, the 80-percent rate for a single-person household was $39,150. Since first-year teachers at IPS make $40,000, the HUD requirements effectively priced single teachers (or married teachers with a working spouse) out of the running.

John Franklin Hay, executive director of NEAR, said NEAR knew that going into the project, but hoped to work with the district to provide incentives to help teachers qualify.

“We began to work with a law firm and a tax attorney to look at the possibilities of a teacher voluntarily reducing their salary temporarily and then receiving a housing benefit,” Hay said.

Legally, it was a possibility, but Hay says NEAR received no little-to-no engagement from IPS regarding the proposal.

This month, however, HUD released its new median area income guidelines, which increased the 80-percent threshold for the teachers village to $43,250.

In response to questions from RTV6, IPS released first, second and third-year salary information showing that as many as 517 new teachers may now qualify under the new income threshold.

RTV6 presented those numbers to Hay on Thursday, who said they came as a welcome surprise.

“If raising that income threshold to $43,250 qualifies 517 previously unqualified IPS teachers, that is absolutely good news for those teachers,” Hay said. “It’s good news for IPS.”

The first home in the project was completed in late April, and closed Wednesday, Hay said. And while the houses in the project are open to anyone who meets the income requirements, the first buyer is a charter school teacher.

“That’s significant that the first house sold to a teacher, we think,” Hay said.

Hay said sales on four other houses were pending (including one more teacher), and three were currently in underwriting. In all, 37 people have gone through some portion of the income-qualifying process with NEAR for the teachers village. Seventeen were teachers, Hay said.

With one house sold and four others in progress, Hay says the village is currently meeting NEAR’s goal of selling all of its houses within 90 days of going on the market. If the teachers village can meet its second goal – 30-50-percent occupancy by Indianapolis-area teachers – Hay hopes it will be a big step toward addressing the city’s educator retention problem.

“If they locate here and purchase here, the likelihood that they will stay here and invest more time in the urban core here – where we need great teachers – is all the better. So we think it’s promising,” Hay said.