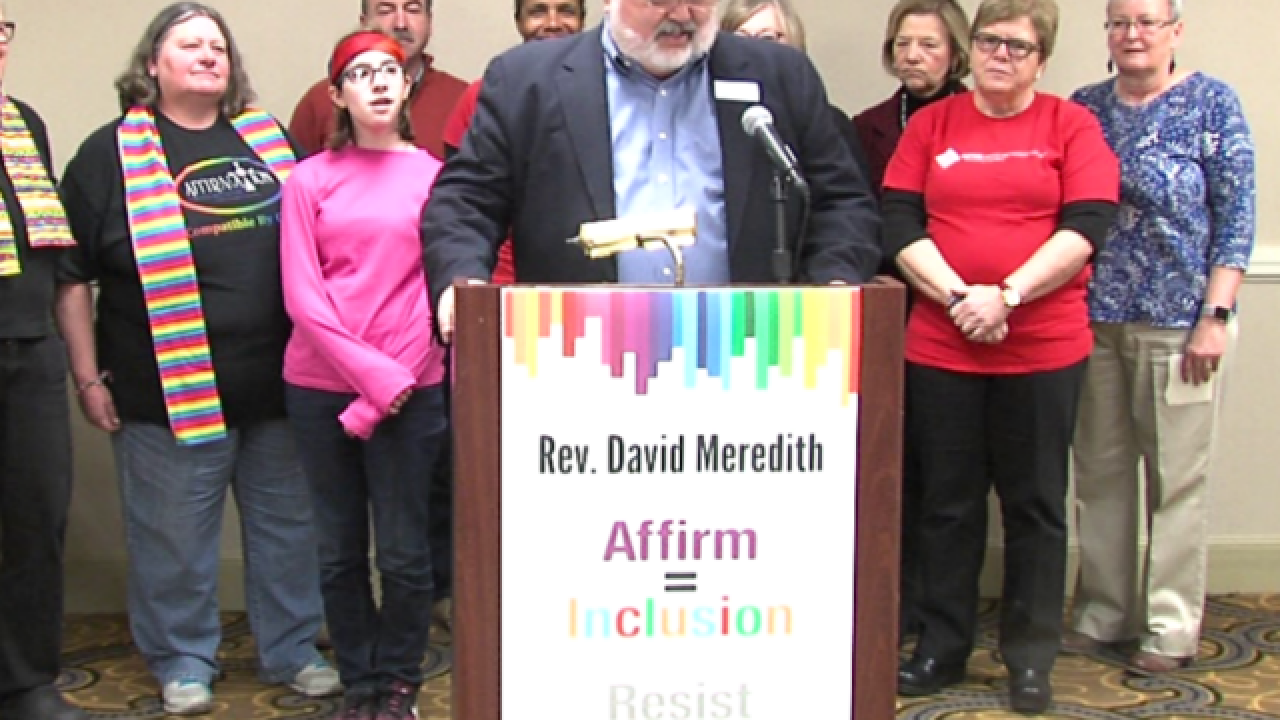 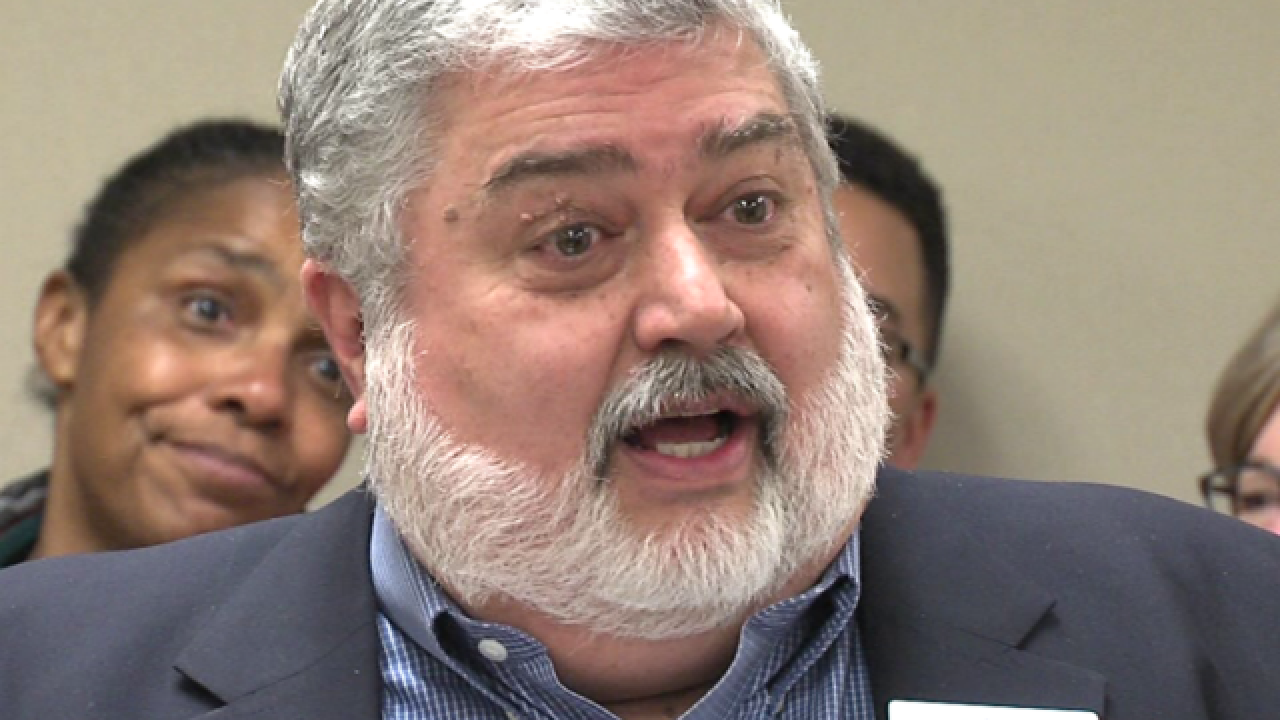 INDIANAPOLIS -- A Cincinnati pastor will face trial by a council of church leaders in Indianapolis on Friday to determine whether his marriage to a man makes him unfit to be a United Methodist minister.

Rev. David Meredith has served as the pastor of the Clifton United Methodist Church in Cincinnati as an openly gay man since 2012. More than a decade prior, in October 1998, the church became a so-called “reconciling congregation” that welcomes “all persons, regardless of sexual orientation,” according to its website.

In 2016, though, Meredith’s sexual orientation became an issue for some members of his church after he married his long-time partner, Jim Schlachter.

Rev. David Meredith, a @UMChurch pastor out of Cincinnati, will face a trial by church bishops in Indianapolis tomorrow over whether his marriage to a man disqualifies him from being an ordained UMC minister. (Photo via @WCPO) pic.twitter.com/MFYhAiGtAI

Shortly after their wedding, 11 UMC denomination members sent letters to the bishop of UMC’s West Ohio Conference challenging Meredith’s fitness to remain as pastor, according to RTV6’s sister station WCPO.

The letters cited a section from the UMC’s Book of Discipline outlining qualifications for ordination which says homosexuality is “incompatible” with Christian teaching:

"While persons set apart by the Church for ordained ministry are subject to all the frailties of the human condition and the pressures of society, they are required to maintain the highest standards of holy living in the world. The practice of homosexuality is incompatible with Christian teaching. Therefore self-avowed practicing homosexuals are not to be certified as candidates, ordained as ministers, or appointed to serve in The United Methodist Church."

A later passage in the Book of Discipline dealing with UMC funds says they may not be used to promote the acceptance of homosexuality – but also notes that expenditures may not violate “the expressed commitment of the United Methodist Church ‘not to reject or condemn lesbian and gay members and friends.’”

In October 2017, the Committee on Investigation for the West Ohio Conference of the United Methodist Church dismissed the two most serious violations Meredith faced – that he lived an “immoral lifestyle” and that as a “self-avowed, practicing homosexual” he couldn’t be ordained as a minister – but left open the possibility of discipline for a lesser violation of disobedience to church law.

That decision was appealed by a group of UMC members which included the pastors of two Cincinnati-area churches, according to WCPO.

That appeal will be heard Friday in Indianapolis by the United Methodist Church’s North Central Jurisdictional Committee on Appeals.

Meredith, who held a press conference in Indianapolis on Thursday discussing the case, says the charges against him are being pushed by “mean-spirited literalists:”

“Faced with the choice of respecting the authorities of this discernment process, which is outlined by our United Methodist polity, a group of mean-spirited literalists refused to respect the rule of law embedded in our United Methodist tradition. The 10 complainants, which include six clergy peers and the counsel of the church – another clergy colleague – appealed the decision made by the West Ohio Committee on Investigation. Not only that, in their hearts and minds, even now, they simply refuse to respect gay and lesbian United Methodist followers of Jesus and their friends, and their families, and their pastors and their congregations. In fact, they grieve the Holy Spirit’s work as they deny the presence of the Spirit in LGBTQ United Methodist Members. If anyone has abandoned the United Methodist spirit, it is they. They have abandoned our first Wesleyan spiritual rule: Do no harm. And instead they have inflicted it.”

Meredith was joined at the press conference by his husband and members of supportive organizations, including Reconciling Ministries Network, United Methodist Queer Clergy and Love Prevails.

Meredith said Thursday that it’s the UMC’s laws that need to change.

“What the Committee on Investigation decided, and what we decided a long time ago, is that what’s unreasonable are the laws,” Meredith said. “The laws that say that the Church has tried to define what it means for me to be gay and to be married. They have crafted some words that are completely unfamiliar to me and my life. ‘Self-avowed practicing homosexual…’ I do not know what that is. Because it is made up in the minds of people who hate. And I will not be for them the stereotype that they choose to create.”

Meredith’s hearing was scheduled for Friday morning at the downtown Indianapolis Hilton. A spokesman for Meredith said 100-150 supporters are expected to be in attendance.

If the lower committee’s hearing is upheld, the ruling could be appealed to the UMC Judicial Council – the church’s equivalent of the U.S. Supreme Court.

Punishment for the lowest charge of disobedience commonly carries a penalty of a seven-day suspension, a spokesman for Meredith said. The pastor could potentially face revocation of his ordination if found guilty of the more serious charges, though.

Meredith said Thursday he was optimistic about the outcome of Friday’s hearing.

“I have been in the Church for 46 years,” Meredith said. “I wouldn’t have stayed in the United Methodist Church my entire life under the threat of the things that are standing against me if I were not a person of hope. So I am hopeful.”