Indiana sits near two major fault lines, one which has a history of producing devastating quakes 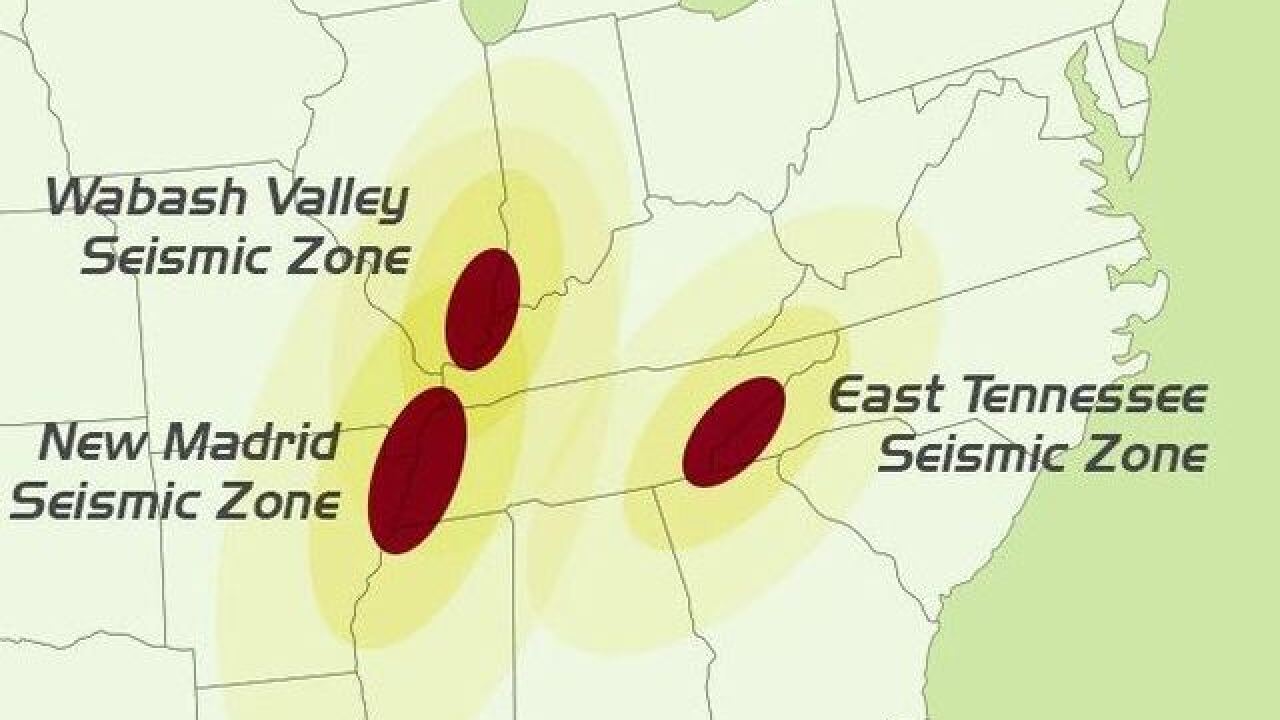 INDIANAPOLIS -- When you think about earthquakes, Indiana isn't the first place that comes to mind, but in the aftermath of Tuesday's deadly 7.1 earthquake near Mexico City and the 3.8 earthquake in southeastern Illinois, it's not unrealistic to worry about the threat of a devastating quake in central Indiana.

Indiana sits near two powerful fault lines, one of which has historically produced live-threatening quakes.

The New Madrid Seismic Zone and the Wabash Valley Seismic Zone are two of the largest fault lines in the Central United States. Although neither has produced a significantly damaging quake in many years, that doesn't mean they aren't capable of doing so.

But just how much of a threat these zones pose and how likely they are to produce a serious earthquake is something geologists seem to have trouble agreeing on. Because earthquakes are less common in the Central U.S., the United States Geological Survey (USGS) says much less is known about the hazards in the area than in places like California where earthquakes are more common.

Because of this, it's a lot harder for them to guess how likely or soon a major quake could rattle the Midwest.

The New Madrid Seismic Zone is located near where the Mississippi River meets the Ohio River in Cairo, Illinois.

The last devastating activity from the New Madrid Seismic Zone occurred between December 1811 and February 1812. During that three-month period, a series of earthquakes - some a 7.0 or greater on the Richter scale - hit the fault line in parts of Missouri Arkansas, Tennessee and Kentucky.

Even with the disagreements, the potential hazard from the New Madrid Fault Line is still considered great. According to the USGS, there is a seven to ten percent chance that a repeat of the 1811-1812 sized earthquakes will occur within the next 50 years and a 25 to 40 percent chance of a still-dangerous magnitude 6.0 quake could strike during that time. A Federal Emergency Management Agency computer simulation created more than a decade ago found that a 7.7 magnitude earthquake could kill between 3,200 and 4,300 people and leave thousands injured.

Scientists aren't exactly sure why quakes occur in the region. The fault line sits far from the continental plate boundaries where tremblors generally happen, and some researchers have even argued that the faults are shutting down.

The simulation below from the United States Geological Service shows the simulated ground motion of the Earth's surface that could happen if the central U.S. region were to experience a 7.7 magnitude or larger "strike-slip" earthquake on the New Madrid fault line.

The Wabash Valley Seismic Zone is centered in the valley of the lower Wabash River and runs along the Indiana and Illinois border - beginning just south of Indianapolis - and into parts of northeastern Kentucky.

According to the USGS, lesser earthquakes happen relatively frequently along this line - but most of them are so small they're never even felt. Even so, the area does see about one or two quakes a year that pack enough punch to draw attention and is considered one of the most active seismic areas in the country east of the Rocky Mountains.

The most recent quake on Tuesday was a 3.8 magnitude and was centered in Albion, Illinois that was felt across parts of central Indiana.

But the area isn't a stranger to larger earthquakes either.

In 2002, a magnitude 5.0 earthquake struck Evansville causing minor damage and no serious injuries.

In 2008, a magnitude 5.4 earthquake struck Mt. Carmel, Illinois. That quake was felt in at least 16 states, according to the USGS. Damage was reported in Illinois, Indiana and Kentucky.

Even with the conflicting theories, the 500-year rule from the USGS does give us hope since the last major 7.0 or higher quake on the New Madrid fault line was just over 200 years ago.

If you're still concerned, check out the tips below from the Indiana Department of Homeland Security on what to do before, during and after if an earthquake strikes Indiana.