SOUTHPORT, Ind. -- Friday marks one year since Southport Police Lieutenant Aaron Allan was fatally shot while responding to assist with a car accident. Those who worked with him every day are focused on furthering his legacy and keeping his memory alive.

Southport Police Sgt. Jay Thomas says he cherishes the memories he has of Lt. Allan. Some days he finds himself listening to old voicemails and reading through old emails, using them as motivation to keep going and serve as Lt. Allan would have done.

“One of the voice mail messages he says, ‘Hey, give me a call when you get this message.’ Just to be able to hear his voice again is something special to me,” said Sgt. Thomas.

Thomas says Allan would be the first to respond to his Happy Friday messages each week and he never hesitated to share kind words with his fellow officers.

He cherishes the emails he received from Allan, including the one below.

Thomas says emails like this were not uncommon from Allan and his message was always positive and uplifting toward those he worked with.

“I am glad that I am part of this family and again, thank you,” one of Allan’s emails read. “Remember we do not do this for the recognition but to see the smiles that we can put on their(sic) faces.” 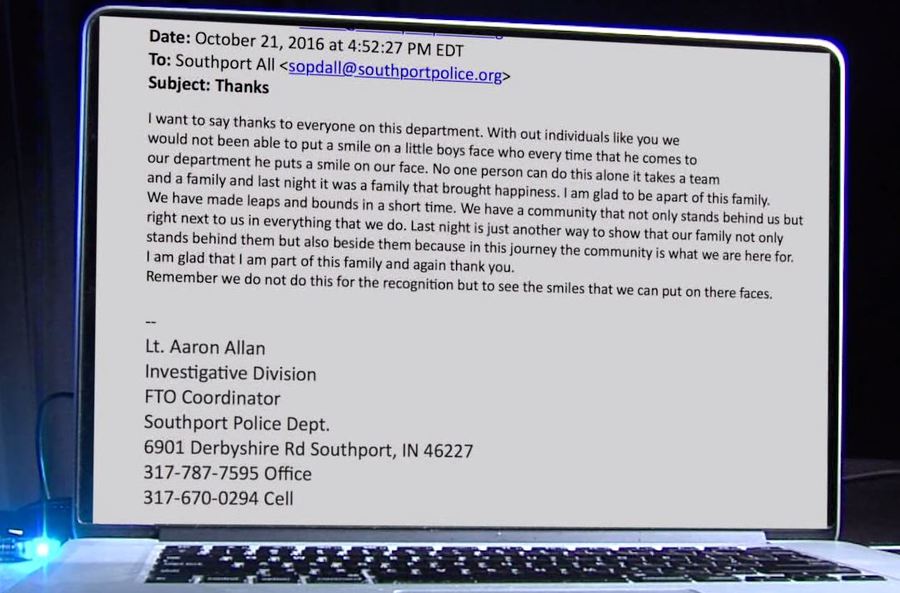 On Friday, a memorial in honor of Lt. Allan will be unveiled outside the new Southport Police Department headquarters. The memorial will include a bench for anyone who wishes to pause at the site to remember Lt. Allan and a sign that acknowledges Allan’s dedication to the city, his family and officers and how much he is missed and appreciated.

“It will be bittersweet for me. Bitter because Lt. Allan is no longer with us, but sweet will be paying respect to his memory and carrying on his legacy,” said Sgt. Thomas. “He will not be forgotten. His memory will forever live with us.”

The man accused of killing Lt. Allan, Jason Brown, is facing the death penalty and has filed for a change of venue. That request is still being reviewed. His jury trial is set for February 24, 2020.