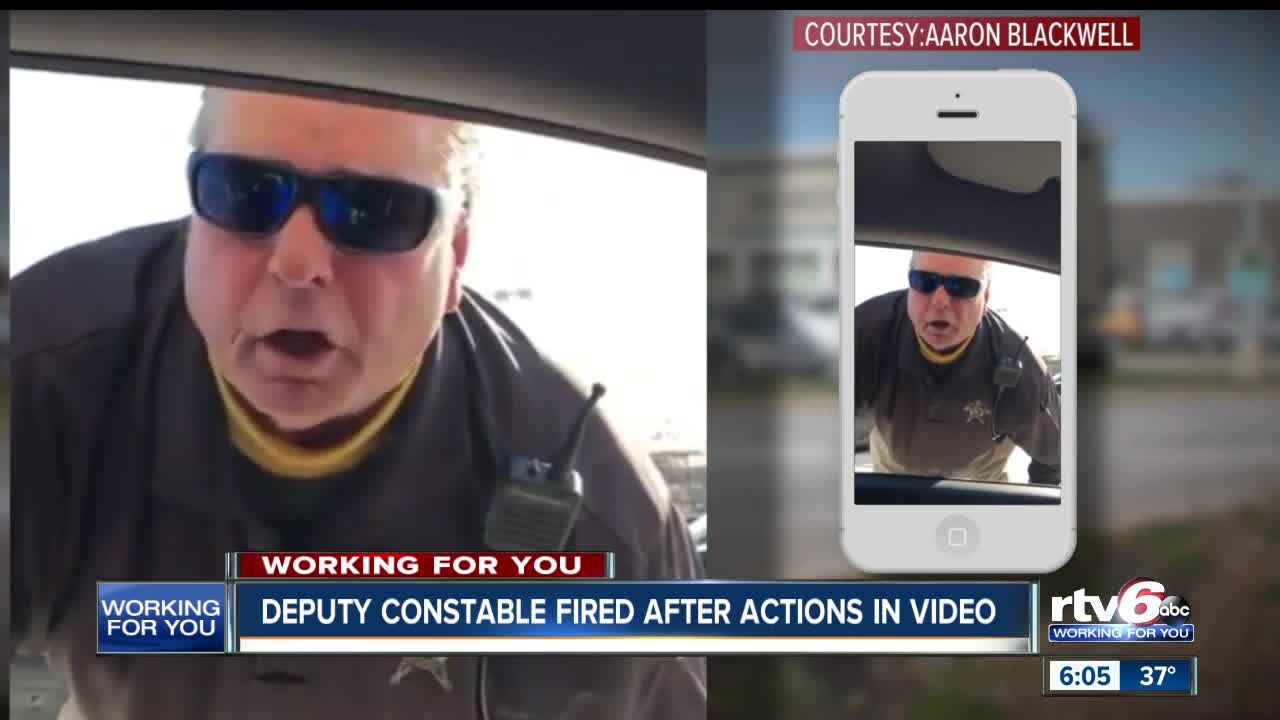 A Lawrence Township deputy constable has been fired after a video of his encounter with two men went viral.

INDIANAPOLIS — A Lawrence Township deputy constable was fired after a video surfaced that showed him confronting a pair of cousins who were shopping in an Indianapolis Nordstrom and accusing them of "being suspicious."

Aaron Blackwell and Durell Cunningham said they feel like they were being racially profiled by a man who was acting as a security guard Tuesday at the Nordstrom Rack in Castleton. That man was later identified by Lawrence Township Constable Terry Burns as a deputy constable, although Burns would not release the man's identity.

"I just feel violated from my rights and how he went about the situation, it wasn't professional," Cunningham said.

Cunningham said he and Blackwell were shopping inside the store when they noticed the security guard watching them. He continued to watch them as they checked out, but never approached them inside the store.

When they finished checking out and walked outside, Cunningham says the man followed them outside the store and watched them get into their vehicles. Blackwell said he started recording from the passenger seat after they noticed the man following them.

Cunningham said he saw the security guard get into his vehicle and start to come toward them, so he pulled back around and in front of the store — that's when the man jumped out of his vehicle and approached the two men.

"I've got my rights to do anything that I want to do, I'm a police officer," the man can be heard yelling into the window of the vehicle at Cunningham and Blackwell.

The security guard then asked Cunningham for his driver's license.

"You either get your license out or I'll call for backup," the deputy constable can be heard saying in the video recorded by Blackwell.

"What do you need my ID for?" Cunningham asked the deputy constable.

"Because you want to run your mouth to me," the deputy constable responded.

"There was no need to ask me for my driver's license. He didn't pull me over for an infraction or anything," Cunningham said.

The three exchanged some words and the security guard told the men they looked "suspicious."

"He said we were doing suspicious activity,'" Cunningham said. "But he watched me push my cart back into the store, grab another bag and leave."

During the altercation, the deputy constable called the Indianapolis Metropolitan Police Department for backup.

The men can be heard asking for a supervisor, but the security guard refuses.

Cunningham said the IMPD officer eventually arrived and asked the security guard what was going on and if the men had stolen something.

"No, they didn't steal items," the man can be heard telling the officer. "They bought a bunch of stuff, but when they were sitting right here I was trying to get their license plate and he hollers out the window, 'You're not getting my plate,' and he takes off."

The men explained their situation and the officer told them he didn't believe any traffic infraction had been committed.

A spokesperson for the Indianapolis Metropolitan Police Department says no report was ever filed from the incident, although an officer did respond to the scene Tuesday afternoon.

Lawrence Township Constable Terry Burns said the man was terminated from his position as a deputy constable Wednesday evening after Burns learned about the video.

“He was terminated last night when the video was brought to my attention. I did see the video and made the decision immediately and that pretty speaks of my reaction," Burns said.

Burns said the deputy constable had been working security for Nordstrom Rack earlier this week, but he was unsure if he was on that job Tuesday afternoon.

Blackwell said Nordstrom contacted him after he posted the video on YouTube and reached out to their loss prevention supervisor. He says they informed him they had also let the security guard in the video go.

James White, a retired Indiana State Police lieutenant and former deputy director of the Indiana Law Enforcement Academy, said drivers are not required to show their identification if the officer has no reasonable suspicion or probable cause. White said there was none in this case and the deputy constable should have provided his badge number and name.

"There was no reasonable suspicion for a stop," White said. "There was certainly no violation of any traffic law or ordinance. So the stop was invalid. And when the constable asked those individuals to provide their identification, as a result of this not being a valid stop, there was no requirement for them to provide identification."

RTV6 has reached out to Nordstrom for comment and to confirm that information. We have not yet received a response as of Thursday afternoon.

You can watch the full video recorded by Blackwell of the incident below.