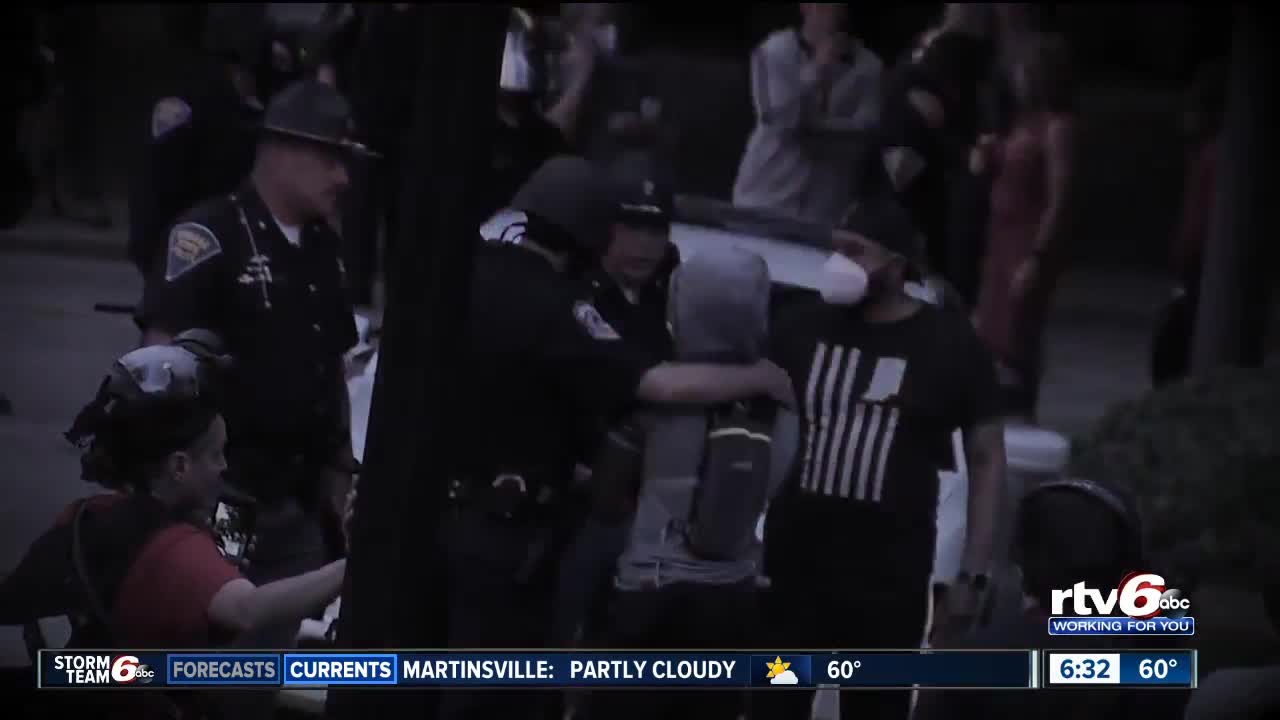 For the fourth consecutive day, protesters took to the streets of Indianapolis on Monday sparked by the death of George Floyd in Minneapolis last week. Unlike previous days, however, Monday's protests culminated in a moment of unity and understanding between police and protesters.

INDIANAPOLIS — The sincerity of a moment of unity shared between Indianapolis protesters and police on Monday evening is being questioned as videos and photos of the event circulate on social media.

There was a dramatic change in tone between police and protesters after a square off on Meridian Street near the Governor's Residence.

Officers removed their masks, exchanged handshakes and hugs and walked arm-in-arm with protesters in a moment of unity between the police and demonstrators.

"We have some people. We have ... police who hear us. Who want the same justice and want the same peace that we do," a protester said, walking arm-in-arm with an officer.

Indianapolis Mayor Joe Hogsett submitted the following statement of applause for the show of unity:

“At this pivotal moment in our country’s history, it is critical that we preserve the right to have voices of change be heard – and that we listen. Tonight, I was proud to watch a moving example of what that can look like.
We have a long, difficult road ahead if we are to address decades of mistrust and create meaningful change. In joining arms, these peaceful protestors and their police department came together to take a small step forward. It was an inspiring reminder of what makes Indianapolis a special place to call home.
I want to thank the men and women of the Indianapolis Metropolitan Police Department, as well as the Indiana State Police, for their continued hard work, as well as the advocacy of those who peacefully and powerfully made their voices heard today.”

However, others felt that it was not an authentic moment.

The Indy10 Black Lives Matter organization took to Twitter and Facebook to voice its concerns with the showing of unity.

Another tweet read, "We still haven't got the names for the man that murdered Dreasjon Reed. It's been almost 30days. F*** 12 always!"

The organization wasn't the only group unmoved by the hugs and handshakes between protesters and police. Many others took to social media as well, saying that true unity will come when a list of demands for the state and city are met.

A list of 13 demands, initially posted by Twitter user @DestinyyB_, quickly began to circulate again on Monday after its original posting on Sunday.

Two of the demands — a reformed "use of force" policy and no charges against non-violent protesters — have been met bet policymakers.

Other demands, however, have not been fulfilled, including the release of the names of the Indianapolis Metropolitan Police Department officers involved in the killing of Dreajson Reed on May 6. The list also calls for Reed's autopsy report to be released to his family.

There were no reports of widespread violence or destruction from Monday night, following the peaceful moment between police and protesters.