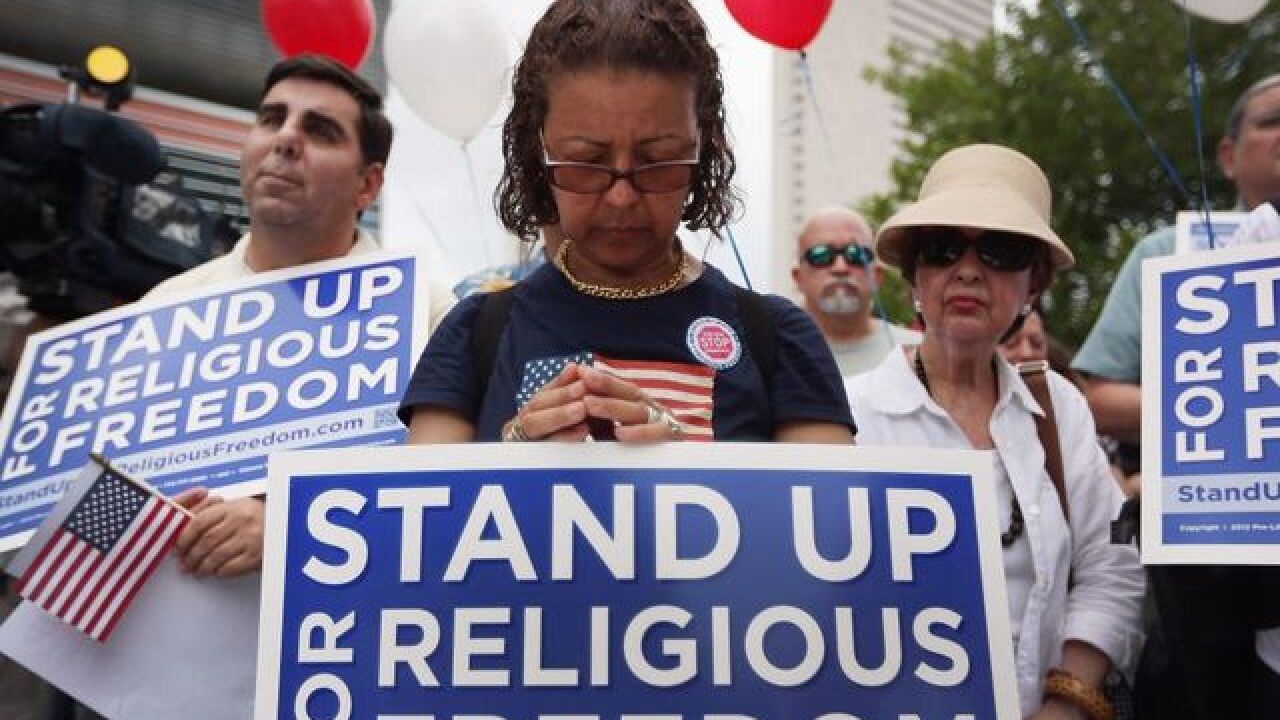 INDIANAPOLIS -- One year after Indiana's Religious Freedom Restoration Act was signed into law, the dust has yet to settle.

Gov. Mike Pence signed RFRA into law on March 26, 2015, in a private ceremony. He was surrounded by members of Indiana's religious communities and prominent social conservative lobbyists. Absent were members of the press – who weren't even allowed to wait outside – and representatives from Indiana's business community, who had expressed fears over the law's possible economic repercussions.

The ceremony proved to be a microcosm of the divide RFRA would cut through the state's Republican establishment. Business-oriented conservatives who warned against the law before its signing went into full revolt afterward. Conventions pulled out of the state, or threatened to. Indianapolis Mayor Greg Ballard, a Republican, gave a defiant speech saying Indianapolis "would not be defined" by RFRA. Angie's List CEO Bill Oesterle, who ran former Gov. Mitch Daniels' first campaign for governor, stepped down to start a coalition of tech businesses in support of LGBT rights.

At the other end, religious and social conservatives worried Christian business owners would face legal repercussions for declining to participate in gay weddings saw the law as restoring proper protections to religion – and Gov. Pence as a defender of their liberties. When he signed the so-called RFRA "fix," the Indiana Pastors Alliance led a protest, calling the move a betrayal.

MORE | Where are the supporters of RFRA? Silent over fear of bullying, law's architect says

In December, attorney James Bopp, representing Curt Smith, of the Indianapolis Family Institute, and Micah Clark, of the American Family Association of Indiana – two of the conservative lobbyists who helped conceive and push for the law – sued the cities of Carmel and Indianapolis over their non-discrimination ordinances.  Also included in the lawsuit was the RFRA "fix." All three were accused of discriminating against religious organizations that adhere to a "biblical view of marriage and human sexuality."

Meanwhile, in response to RFRA, a growing number of cities have passed their own local ordinances expanding civil rights protections to LGBT Hoosiers.

BELOW: A YEAR OF RFRA IN THE NEWS

The price of religious freedom

How much did RFRA cost the state of Indiana? In the short term: As much as $60 million.

That's revenue lost as organizations moved their conventions out of state in protest of the law, according to Indianapolis promoter Visit Indy.

According to Chris Gahl, Visit Indy's VP of marketing, a dozen conventions went elsewhere after RFRA was passed. Even after the "fix," none of them have agreed to return to Indy.

"Any time anyone says no to Indy, we ask them why," Gahl said. "And proactively, these events have cited RFRA and LGBT rights as a reason, if not the reason, for going elsewhere."

The good news, Gahl said, is that only 12 conventions left. Without the "fix," Indy could have lost as many as 80 more.

"We've weathered the storm from last year at this time when conventions threatened to cancel and there was an abnormal amount of negative media coverage questioning the foundation block of our brand: Hoosier Hospitality," Gahl said. "Perception is reality. Right, wrong or indifferent, we were being perceived as inhospitable, even with the amendment."

Although state leaders have downplayed claims of damage to the state, the Indiana Economic Development Corporation quietly hired a major public relations firm last year to assess the fallout – even before the "fix" had been signed. Indiana Democrats criticized the contract, especially because it was made with an out-of-state firm at a time when Gov. Pence was publicly praising the strength of Indiana businesses.

Though the RFRA "fix" largely quieted the initial furor over the law, it marked the beginning of a concerted push for a statewide anti-discrimination language protecting LGBT Hoosiers.

Not wanting to wait on the legislature to act, cities like Carmel, Kokomo and Columbus – Pence's hometown – passed their own local ordinances expanding human rights protections to include gender identity and sexual orientation.

Two coalitions of tech leaders and businesses – Indiana Competes and former Angie's List CEO Oesterle's Tech for Equality – were formed to pressure lawmakers to support a bill adding "four words and a comma" to the state's civil rights law.

Even though proposals to do some version of that failed during the 2016 session, the discussion over the issue was markedly different from just a few years earlier, when, but for an act of the courts, Indiana nearly added an amendment banning same-sex marriage to its constitution.

Despite the backlash, Gov. Pence hasn't shied away from vocal support of other items on social conservatives' agendas.

In October, Pence announced a $3.5 million contract with the anti-abortion organization Real Alternatives to "actively promote childbirth instead of abortion."

On Thursday, Pence signed a controversial abortion law banning the procedure because of fetal genetic anomalies that outraged Democrats and even drew protests from some members of his own party.

In January, Pence found himself back in the good graces of the Indiana Pastors Alliance after appearing to take a stand against expanding LGBT civil rights in his State of the State address.

"I will not support any bill that diminishes the religious freedom of Hoosiers or that interferes with the Constitutional rights of our citizens to live out their beliefs in worship, service or work," Pence said. "Our freedoms are too precious to our people, too vital to our wellbeing and have been bought at too high a price to do any less."

Fortunately for Pence, who faces a stiff re-election challenge from former House Speaker John Gregg, the focus of the national LGBT-rights debate has moved on from Indiana.

In North Carolina, lawmakers convened a special session this week to pass a state law overriding local ordinances that prohibit discrimination in public places based on sexual orientation and gender.

In neighboring Kentucky, Fayette Circuit Court Judge James Ishmael ruled the First Amendment – and the state's RFRA law – gave a printing company the right to refuse to do business with an LGBT-advocacy group.

And in Georgia, Disney and Marvel Studios have threatened to boycott the state if the governor signs its own religious liberty law – HB 757. The NFL has even attacked the bill, saying Atlanta's hopes of hosting the Super Bowl could go out the window.

With Indiana's 2016 legislative session over, supporters' hopes for adding gender identity and sexual orientation to the state's civil rights law will have to wait for next year.

Visit Indy's Gahl said the tourism industry is keeping a sharp eye on the issue.

"At the end of the day we have 70,000 people who depend on tourism for a paycheck, and our ability to fill the city up and bring people in directly impacts them," he said. "From a tourism standpoint, we were encouraged by the healthy discussion that took place this session. We remain optimistic that next time the Statehouse is in session they'll dig even deeper into this important topic."

Where the issue actually stands at the Statehouse is less clear. Though both House Speaker Brian Bosma and Senate President David Long supported some version of a civil rights bill this session, Long said earlier this month it's obvious "more discussion" is needed before any change in state law.