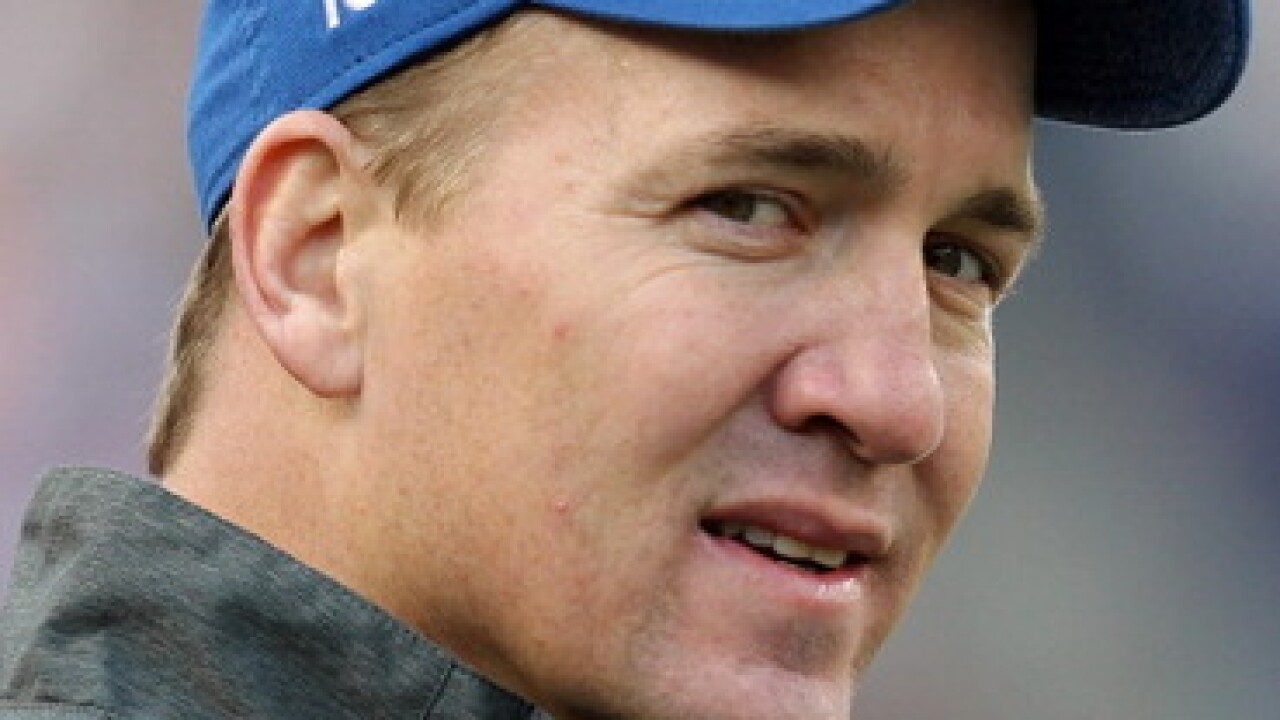 Copyright Getty Images
<p>Manning is beloved in Indianapolis, having spent 14 seasons with the Colts.</p>

ENGLEWOOD, Colo. — Peyton Manning strongly denied a report set to air on Al Jazeera that contends the Denver Broncos quarterback received human growth hormone through his wife during his recovery from neck fusion surgeries in 2011 in Indianapolis.

In a statement Saturday night, Manning said: "The allegation that I would do something like that is complete garbage and is totally made up. It never happened. Never."

He added, "I really can't believe somebody would put something like this on the air. Whoever said this is making stuff up."

The allegations surfaced in an Al Jazeera undercover probe into doping in global sports that is set to air Sunday and was shared in advance with the Huffington Post.

The report claims Manning received HGH from an Indianapolis anti-aging clinic in 2011 while he was still with the Colts. It said the drug, which was banned by the NFL in the 2011 collective bargaining agreement, was delivered to his wife, Ashley, so that the quarterback's name was never attached to the shipments.

Liam Collins, a British hurdler, went undercover and spoke with Charlie Sly, an Austin, Texas-based pharmacist who worked at the Guyer Institute, the Indiana-based anti-aging clinic in 2011. Sly allegedly names Manning and other high profile athletes as having received HGH from the clinic.

However, Sly backtracks in a subsequent statement to Al Jazeera, saying Collins secretly recorded his conversations without his knowledge or consent.

The NFL and players union added human growth hormone testing to the collective bargaining agreement signed in 2011 but the side didn't agree to testing terms until 2014. Nobody has tested positive, which would trigger a four-game suspension.

Manning, who joined the Broncos in 2012, has been sidelined since Nov. 15 by a left foot injury. Brock Osweiler makes his sixth consecutive start in Manning's place Monday night when the Broncos (10-4) host the Bengals (11-3).

The Denver Broncos released a statement saying: "Knowing Peyton Manning and everything he stands for, the Denver Broncos support him 100 percent. These are false claims made to Al Jazeera, and we don't believe the report. Peyton is rightfully outraged by the allegations, which he emphatically denied to our organization and which have been publicly renounced by the source who initially provided them. Throughout this NFL career, particularly during his four seasons with the Broncos, Peyton has shown nothing but respect for the game. Our organization is confident Peyton does things the right way, and we do not find this story to be credible."

The #Broncos statement on Peyton Manning ahead of report tying him to HGH... @rtv6 @IndyThisWeek #Colts pic.twitter.com/yAaIJcCq3Z