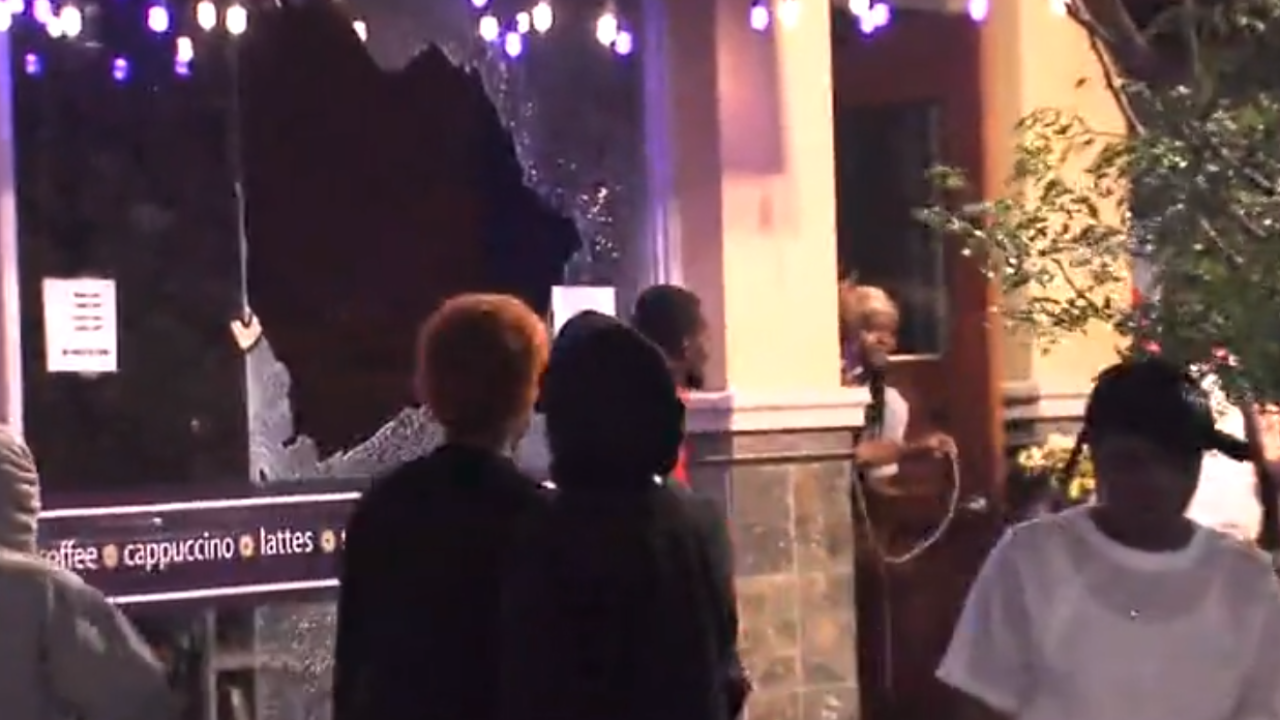 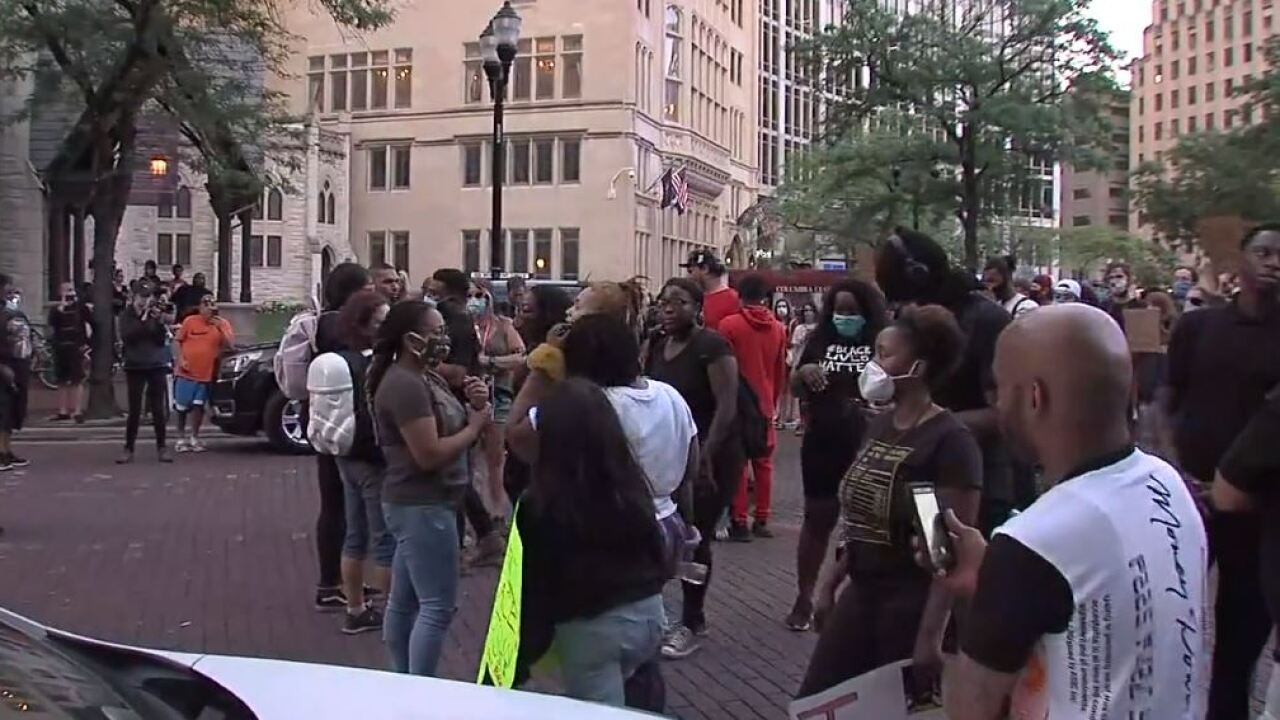 The protesters say they are standing in solidarity with protests across the nation after the death of George Floyd.

People have been protesting in downtown Indianapolis since Friday afternoon.

You can watch video from the protests below:

Protests have also happened in Indianapolis since Dreasjon Reed was shot and killed by a Indianapolis Metropolitan Police Department officer on May 6.

The safety and wellbeing of person and property for those who live, work and visit Downtown is Downtown Indy, Inc.’s greatest concern shared by our business members and partners.

What took place last night and early this morning did remarkable and senseless damage to businesses and residential properties that will take millions to rebuild and restore. What is most devastating is that the businesses targeted with destruction and looting are the very businesses seeking to lift up racial inequities by employing men and women of all races and minorities – but will now be closed for weeks, months and perhaps forever.

Downtown Indy, Inc. calls on all business and community leaders of all races to demand an end to illegal and dangerous behaviors that have riddled our urban core. We also call upon these same leaders to seek to understand the pent-up anger existing in minority communities and speak out against injustice and inequality and make systemic changes where appropriate.

Peaceful protests are acceptable and welcome, but not when they lead to destruction of property and violence towards fellow humans.

12:10 p.m.
Simon Property Group announced it closed Greenwood Park Mall at noon Saturday. A statement from the City of Greenwood:

Like so many in Indianapolis, I was horrified by the needless killing of George Floyd. I also recognize that the frustration and anger on display over the last few days isn’t new — it has been felt by communities of color for hundreds of years in a country that has far too often fallen short of providing liberty and justice for all.

The systemic racism of our past and present must be acknowledged and addressed. At a successful protest that occurred last night, hundreds of residents did just that, peacefully exercising their right to free speech.

Unfortunately, after the organizers of that event ended the protest, a smaller group of individuals abandoned this message of positive change. I am saddened that so many people and businesses were injured in the violence that ensued. While the emotions that fueled this vandalism may be justified, the actions that were taken and the harm that it has caused are simply unacceptable and did nothing to further the cause of progress.

Last night’s injuries included three law enforcement officers, as well as an individual who received serious injuries while kicking in glass and was saved when an IMPD officer applied a tourniquet and delivered life-saving care. I also want to recognize the actions of the Indianapolis Fire Department to contain multiple fires that were set, as well as our local media that provided necessary journalism under incredibly difficult circumstances.

Our office and the Indianapolis Metropolitan Police Department remain committed to ensuring the safety of peaceful protesters, and I would ask all who speak out in the days that follow to reject the tactics of those who would diminish a movement toward national action into unproductive destruction.

1:14 a.m.
Clothes with tags on it from TJ Maxx were found nearby the store.

1:04 a.m.
The windows of the Indiana State Teachers Associate have been broken.

12:45 a.m.
A fire inside a CVS near West Ohio and North Illinois streets in downtown Indianapolis has been reported, IMPD Sgt. Grace Sibley said. The extent of the fire is unknown at this time.

12:24 a.m.
Shots were fired at a Marion County Sheriff's Office deputy at 1 American Square, IMPD Sgt. Grace Sibley said. The deputy was not injured and did not return fire. No one is in custody in connection to the incident.

I am saddened that the peaceful protest downtown in Indy are starting to get out of control. Damaging property downtown and in the city, will only hurt the cause for justice and equality. Let's not lose the moral high ground by turning to violence as a means to seek justice.

Although the tensions have heightened in downtown Indianapolis tonight, the protestors seem to have lessened in numbers. pic.twitter.com/T5Fb13RMza

Tear gas has now been thrown at the Indianapolis #JusticeForGeorge protestors who have decided to stay. Windows to downtown buildings have been shattered. @wrtv pic.twitter.com/QtACY92n2G

11:03 p.m.
Glass is now being broken at Jack's Donuts in downtown Indianapolis.

10:56 p.m.
Something has been deployed near Monument Circle. It's not clear what it was or who it was deployed by.

10:53 p.m.
People are gathering at the Indiana Statehouse.

10:52 p.m.
Police are telling people over a loud speaker to disperse.

10:51 p.m.
Police cars appear to have blocked parts of Monument Circle as protesters move towards the Indiana Statehouse.

10:40 p.m.
Organizers are at Monument Circle asking people to go home for the night and come back Saturday afternoon.

10:29 p.m.
It appears the protesters are going back to Monument Circle to start to end the protest and come back Saturday afternoon.

10:18 p.m.
The protesters are now walking on Maryland Street in downtown Indianapolis.

9:37 p.m.
The window of the Sheraton Hotel in downtown Indianapolis is broken after it appears someone throw something at it.

The protest on Monument Circle is now moving against the police line. Protestors have now shut down the intersection of Meridian Street and Ohio Street. #BlackLivesMatters leaders are calling on their “white allies” in the protest to help set up a human barricade. pic.twitter.com/axIVAQGTbB