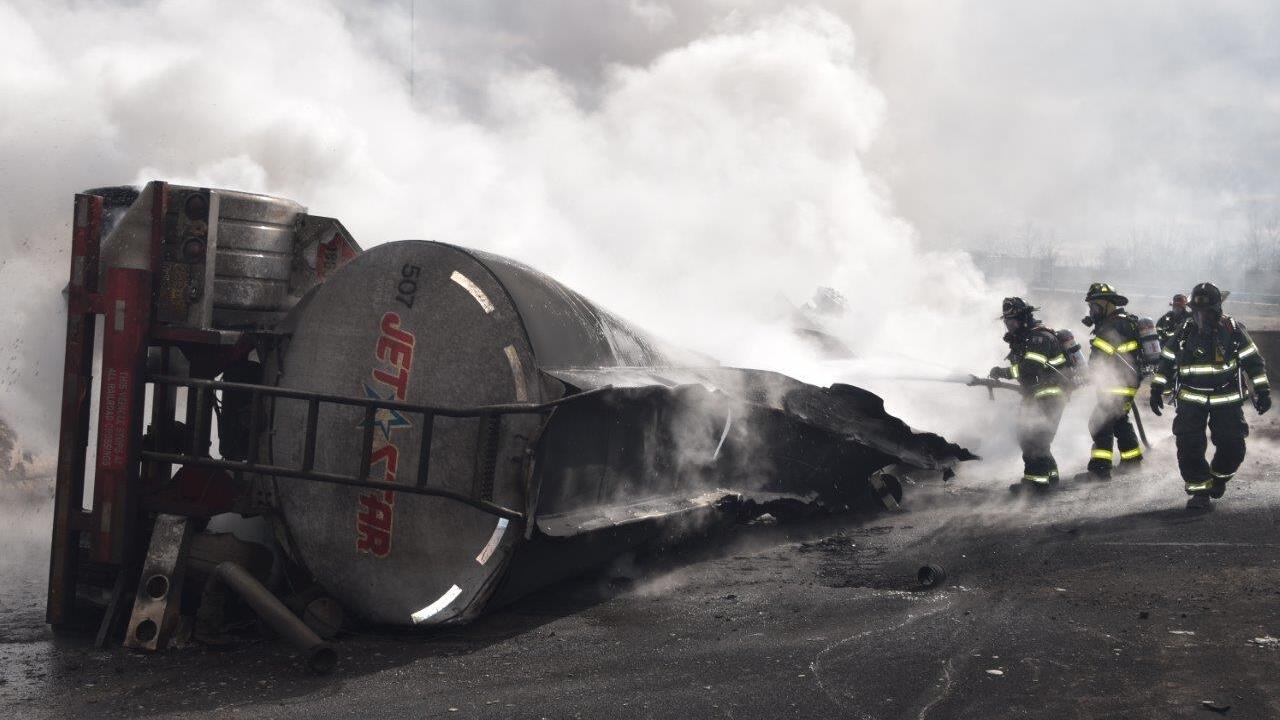 Indianapolis Fire Department
A tanker truck crashed and exploded on a ramp from I-465 southbound to I-70 eastbound on the east side of Indianapolis on Thursday, Feb. 20, 2020.

INDIANAPOLIS — The driver of a tanker truck was critically injured after his truck crashed and exploded Thursday afternoon on an interstate ramp on the east side of Indianapolis.

Indianapolis Fire Department public information officer Rita Reith said the tanker was hauling 4,000 gallons of jet fuel when it overturned before 2 p.m. Thursday on the ramp leading from Interstate 465 southbound to Interstate 70 eastbound.

The tanker truck driver, Jeffrey Denman, 59, of Brownsburg, suffered significant burns and was transported to Eskenazi Hospital in critical condition.

I-70 and I-465 were closed for hours following the crash, and the ramp will be shut down while repairs are made, according to the Indiana Department of Transportation.

Reith said the crash split the tank and overturned the semi, causing the fire to break out. She said witnesses reported Denman left the truck on his own and was alert and oriented, but his clothes were on fire.

A driver, Mitch Navarre, 50, saw Denman standing next to his truck when he stopped his car and ran over to help, Reith said. Navarre tried to get Denman to move away from the burning tanker, but he was in shock and unable to respond. Reith said the first of two explosions then occurred and forced the men to escape to the south side of the bridge ramp.

Hanson put Denman in his police vehicle and covered him with clothes he had in his cruiser until medical help arrived, according to Reith.

A second issue they faced, according to Reith, was having enough water supply to battle the fire. Three tankers full of water were brought to the scene and the fire was extinguished in approximately 40 minutes.

Interstates 70 and 465 were both closed for hours following the crash, and Indiana Department of Transportation spokesperson Mallory Duncan said the ramp will remain closed while repairs are made. Inspectors determined the bottom of the bridge is safe, but they are now looking at the top.

Duncan said workers will make repairs due to extensive damage from the fire and that initial inspections showed no damage to the ramp and bridge. She said INDOT is hopeful the ramp will reopen by Friday morning.

PHOTOS | PHOTOS: Firefighters respond to tanker truck crash and explosion on east side


Copyright 2020 Scripps Media, Inc. All rights reserved. This material may not be published, broadcast, rewritten, or redistributed.