Trump on Carrier: You're gonna pay a damn tax 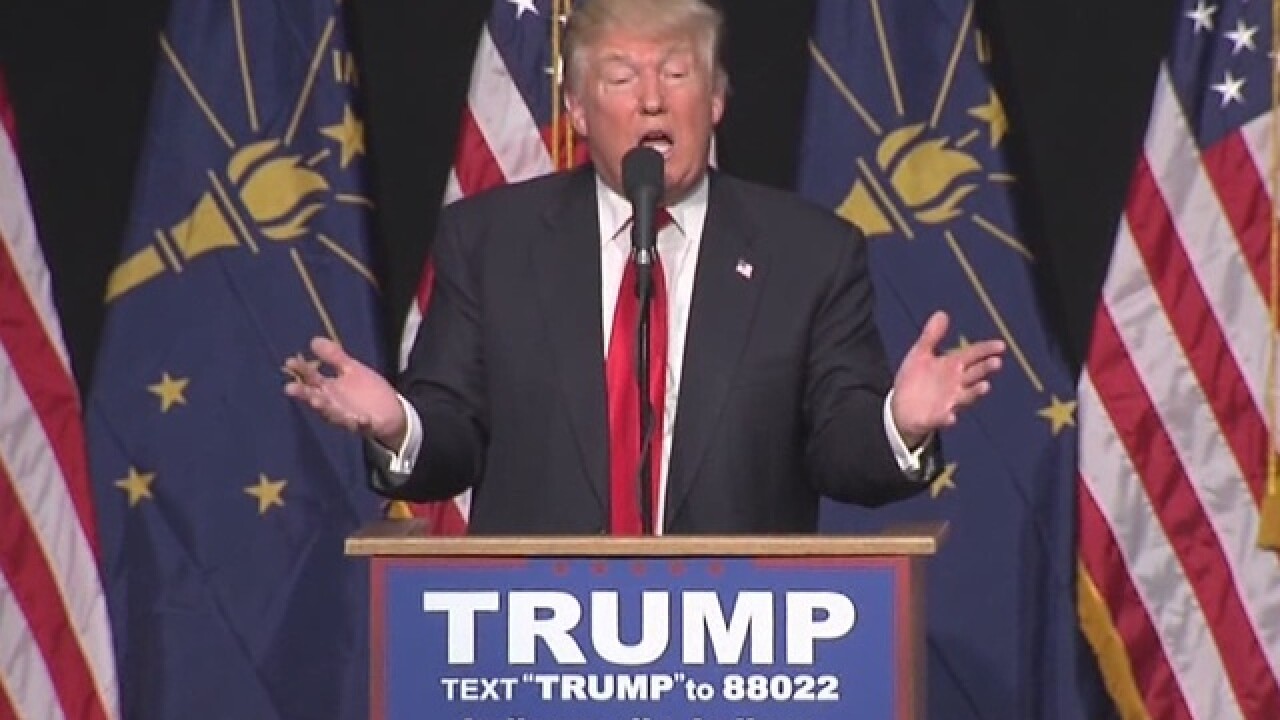 INDIANAPOLIS -- One of the focal points of GOP presidential front-runner Donald Trump's rally speech at the Indiana State Fairgrounds Wednesday afternoon surrounded the Carrier Corporation, which is moving 1,400 Indianapolis jobs to Monterrey, Mexico.

Trump started and stopped with comments on Carrier several times through his speech, often getting sidetracked by tangents.

But his message remained the same throughout: "If I was in office, Carrier wouldn't be leaving," Trump said.

Two Carrier workers were in attendance, which Trump identified by asking the audience of 5,000 if anyone was fired from Carrier.

The employees had been with the company for 17 and 26 years.

"Do you like the idea of taxing the hell out of those air conditioners?" Trump asked the Carrier workers.

Trump went on to trumpet a familiar stance he's taken on international trade, and what he sees the consequences for businesses who want to leave the U.S.:

"You're gonna pay a damn tax when you leave this country and you think you're going to sell product because we're all so stupid," Trump said.

Watch Trump's full comments on Carrier in the video player above.

PHOTOS:
Protesters at Trump's rally
The faces of Trump supporters

"If I were in office right now, Carrier would not be leaving Indiana, that I can tell you," Trump said.

RTV6 has launched special coverage on Carrier's departure. You can watch episode 1 of our documentary series here.

FULL COVERAGE: TIMELINE: Carrier to ship 1,400 jobs from Indiana to Mexico |  Hogsett calls on Carrier to return $1.2M within 30 days | Coats, Donnelly have 'disappointing' meeting with Carrier execs | IEDC responds to Sen. Donnelly's comments on Carrier |  Sen. Donnelly: Carrier never cited federal regulations as reason for move | Union president: 'We're not going away quietly' | Carrier employees protest move at statehouse| Pence on Carrier meeting: 'I don't want to create any false hope for people' | Moving to Mexico: What you need to know about Monterrey, Mexico  | Moving to Mexico: On the ground in Monterrey, Mexico, where Carrier is moving  Trump weights in on Carrier relocation to Mexico  | Carrier: Company did not receive $5M in federal stimulus funds  | President of United Steelworkers Union: No hope of saving 1,400 jobs  | Carrier employees, local businesses reel after announcement of move to Mexico  | WATCH: Employees react to news that Carrier is moving from Indy to Mexico  | Pence to review Carrier's plans to move to Mexico  | TRUMP: Carrier should be taxed for their goods after move to Mexico  | Hogsett, Donnelly meet with Carrier workers  | City, state stepping in to help Carrier employees | Indiana leaders ask Carrier for a meeting to try to keep the plant, jobs in the state