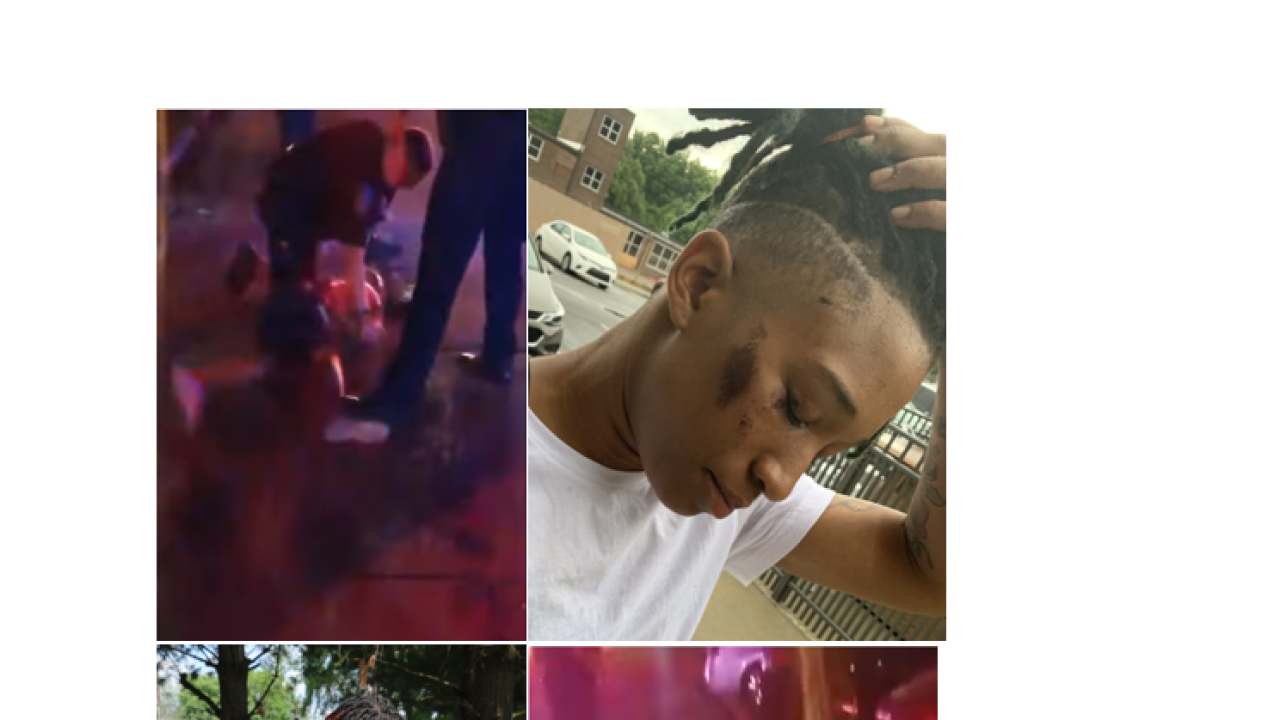 INDIANAPOLIS — A video that reportedly shows two Indianapolis Metropolitan Police Department officers using excessive force on a local musician — who continually said she was not refusing arrest — increasingly spread on social media this weekend, and now, local organizations are calling for action to be taken on the officers involved.

Chanel Bates, 26, screamed for help when two IMPD officers were arresting her on the corner of South Street and Meridian Street in Downtown Indianapolis on Saturday. After she, along with two people, left Tiki Bob's late Saturday night.

According to IMPD, two officers on foot patrol allegedly smelled marijuana coming from Bates' car and approached the vehicle and instructed all three of them to exit the car. Police said the two people with Bates complied and exited the car, but Bates did not.

"I said, 'I'm going to let you know right now, for my safety and for your safety, I'm about to record this,'" Bates told an officer. "As soon as I reach for my phone, he slaps it out of my hand. He breaks my phone. The [other] officer to the right of me reaches in on the passenger side... turns my car off and snatches the key out the ignition. The officer on the driver side — because the windows are all the way down — reaches inside, from the outside, yanks open my door and takes my left arm and pulls me directly out of my car and directly on the ground."

The video shows about two minutes worth of the incident; from the beginning, you can hear Bates scream out:

In light of Eric Garner's death coming back into headlines Tuesday after prosecutors say they could not prove NYPD officers acted willfully in his death, IMPD explained how they know Bates was still breathing.

According to IMPD, Bates was resisting an officer in the video that has gone viral, which is a criminal charge. If someone sees flailing legs in the video, another may see kicking legs.

When one of the officers pinning Bates to the ground said, "You're breathing just fine — shut up," Bates said she feared for her life at that point.

"I wasn't prepared for this to happen..." Bates said. "You knew you were wrong... why are three grown men on top of me and telling bystanders to stop recording."

The officers initiated the stop because they smelled marijuana coming from Bates' car, and then because Bates escalated the situation, she was placed under arrest for refusing to comply with the commands of officers. After apprehending Bates, officers found four roaches in the front of Bates' car, according to the probable cause affidavit.

Bates said the officers told her they knew she was selling drugs.

"I said, 'you're lying, sir. Admit your fault and let me go,'" Bates said. "I did not kick on nobody or spit on nobody."

The IMPD officers did not let her go; however, she was held in the downtown jail for over 12 hours.

Bates said she went to Eskenazi hospital after being released. Bates says she can't feel anything in her right hand because she now has nerve damage and her anxiety is at an all-time high. She now fears driving her car.

"... If you could still just be sitting in your car and just be pulled out," Bates said. "And you just tell me what you think I did.. You didn't even ask for my ID, or my name!"

After a hospital visit and a talk with friends, the musician who is heavily followed in Indianapolis, posted her story and shared the video of the incident on Facebook and Instagram, and it quickly went viral.

"I've always made sure to watch the YouTube videos of police brutality so I know what to say, this-versus-that, what cases do I need to know to protect myself if this ever happens to me," Bates said. " And I think I studied it so much, and watched so much — law of attraction — you know."

"Over the past few weeks, IMPD has once again shown that their interactions with Black people can end up with life long injuries and trauma, if not death. We need immediate communication from IMPD Chief Roach and Mayor Hogsett on what steps they are implementing to seek out these officers who too often mistreat and manhandle Black community members. When will enough be enough for IMPD? What is the body count they are trying to get to before they are willing to implement drastic changes? How much of our tax dollars are they going to spend on settlements instead of training and firing officers who need to be fired? What results are we seeing from the Community Conversations the City County Council had with the community at large? We are asking for an immediate statements from IMPD for the mistreatment, assault and arrest of Cece Chanel..."

The local Black Lives Matter organization wasn't the only organization to demand action be taken on the three IMPD officers involved in the incident, the Indianapolis Women's March organization also has asked followers to call on IMPD's Chief Bryan Roach to suspend these officers.

The Indiana National Organization for Women also has called for the suspension of the officers involved.

The local musician is currently seeking representation as she plans to take legal action against IMPD. She is asking that if anyone is able to take on her case, to contact her soon.

IMPD has been working with community partners and community stake holders. Investigators are working an internal investigation, and will soon turn the case over to the Marion County Prosecutor's Office.

At this time, Bates is facing two charges following the incident: Resisting Law Enforcement and Possession of Marijuana.

Following Bates' arrest, a peaceful rally has been planned for next Thursday.