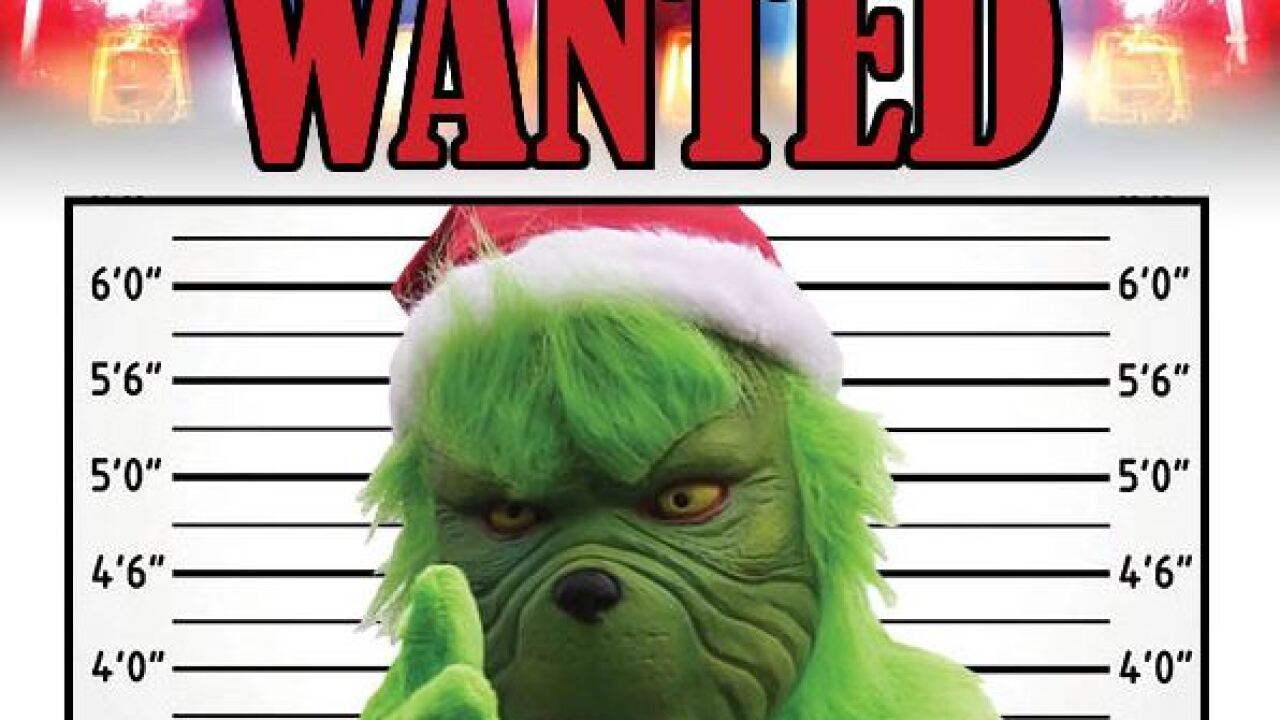 WHITESTOWN — The Whitestown Police Department is asking the public to be on the lookout for the mean ol' Grinch!

"The suspect is dastardly, and can be cunning, but he's predictable," says Whitestown Metropolitan Police Department Public Information Officer, Sgt. John Jurkash, "Luckily for us, our police officers are very familiar with the Grinch's antics, and we are confident we'll catch him in time before he can ruin our annual Santa events."

To that end, police are asking anyone who spots the Grinch to snap a photo (safely) and post it to social media, tagging the Whitestown Police Department and the City of Whitestown.

Read the full Warrant for the Grinch below:

He's a mean one, alright -- as cuddly as a cactus with garlic in his soul. No, you wouldn't want to touch that Grinch with a thirty-nine-and-a-half-foot pole!

But one thing Mr. Grinch is ... is CONSISTENT. Yes, without fail, he starts showing his green, grimacing face all around Whitestown about a week leading up to our annual Santa's Workshop and nighttime Santa Parade. In past years, he's been spotted causing trouble at our local businesses -- even trying to steal the decorations right off the trees outside the Whitestown Municipal Complex! (Now, that's low!)

Our police officers are expecting the same kind of Grinch-ly behavior again this year.

"The suspect is dastardly, and can be cunning, but he's predictable," says Whitestown Metropolitan Police Department Public Information Officer, Sgt. John Jurkash, "Luckily for us, our police officers are very familiar with the Grinch's antics, and we are confident we'll catch him in time before he can ruin our annual Santa events."

That's where police need your help.

Although they have officers on-duty around the clock, they can't be everywhere (or see everything) at once, so they are asking the public to be on the lookout for the Grinch in the days leading up to our Santa events on Saturday, December 14th. If you spot the unscrupulous, unprincipled, underhanded mischief-maker anywhere around Whitestown, you're asked to snap a photo (if it's safely possible to do so) and post it on social media. (Make sure to tag the Police Department and the Town of Whitestown so authorities will see it right away.)

"We know that the Grinch always gets more active the closer we get to the annual Santa's Workshop event, which takes place in the gymnasium of the Whitestown Municipal Complex," explains Sgt. Jurkash, "He shows up at that event every year -- he can't help himself! With Santa and Mrs. Claus there, the reindeer, all the happy children, and all the holiday spirit happening, the Grinch just can't help but crash the event to try to wreck it." continues Sgt. Jurkash. "Although he can be devious and tricky, our officers are expecting him to show his green face at some point during that event -- and we'll be ready."

Our skilled police officers have arrested the Grinch in the nick of time every year that we've been having our Santa events. Children usually cheer our officers and boo the Grinch as police lead him out of Santa's Workshop in handcuffs. Traditionally, the Grinch is paraded around town in a squad car during our Santa Parade that same night to teach him a lesson.

"His crimes are misdemeanors, so he usually avoids any significant jail time and is released shortly after our events." says Sgt. Jurkash. "We keep hoping he can improve his attitude and be rehabilitated -- that he'll change his ways before the next holiday season -- but, so far, that hasn't happened. I guess his heart really is an empty hole."