Words of warning from food delivery woman robbed at gunpoint 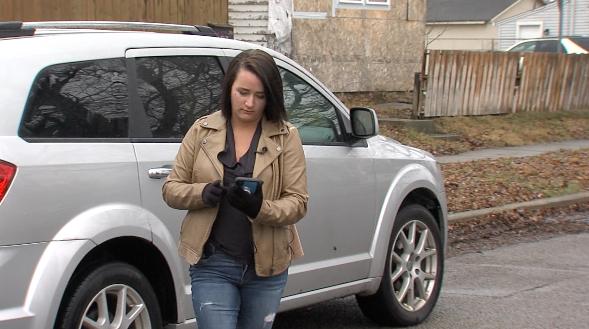 A woman who delivers food in Anderson has a warning, after she was robbed at gunpoint

ANDERSON — A central Indiana woman is sharing an important warning following an armed robbery while she was delivering food for DoorDash.

The Anderson mother was trying to make some extra money. On January 20th, she picked up two pizzas from Papa John's in Anderson. She then attempted to deliver the pizza to a home on Cedar Street.

"I went and knocked on the door. When the person answered, they said nobody at this address goes by that name," Headquist said.

Hedquist called Papa John's since the order was made at the store. She says it's common for Papa John's to have DoorDash drivers deliver orders for them when they get busy. She then called the customer who said he saw her driving down the street.

"I saw two boys in the street waving me down," she said.

At this point, she was parked on Cedar Street near Dr. M.L.K Jr. Blvd. One of the boys said he forgot his money at home and they turned to walk back. Hedquist got back in her vehicle to wait on them.

"As soon as I sat down, I looked to my right and there was a gun there. He placed it to my temple," she said.

The robber had opened her passenger side door and was inside her vehicle.

"I could feel him shaking - I knew he was nervous," Hedquist said. "He kept telling me give me everything those were his words."

The suspects stole her purse and the two pizzas.

"I was terrified. I was just thinking about my kids mostly. Are they going to have a mom tomorrow?"

Anderson Police are investigating the case. RTV6 sat down with Major Joel Sandefur who says they have had other pizza delivery drivers robbed in the past, but no other recent cases.

"It's always a good idea for those who are working in this type of industry, operate under the assumption we need to be cautious," Major Sandefur said.

He advises delivery drivers to ask customers to come out of their homes if they don't feel safe. If the customer says you are at the wrong location, that should be a red flag,

"Not everyone out there is trying to take advantage of us. There is that element out there of individuals who will do that, just prepare and use common sense." Hedquist said.

"We take the safety of our community extremely seriously. Since learning of this incident we took immediate action, including reaching out to the Dasher to confirm her safety and offer our support and care. We have also been in touch with local law enforcement to cooperate in the investigation."