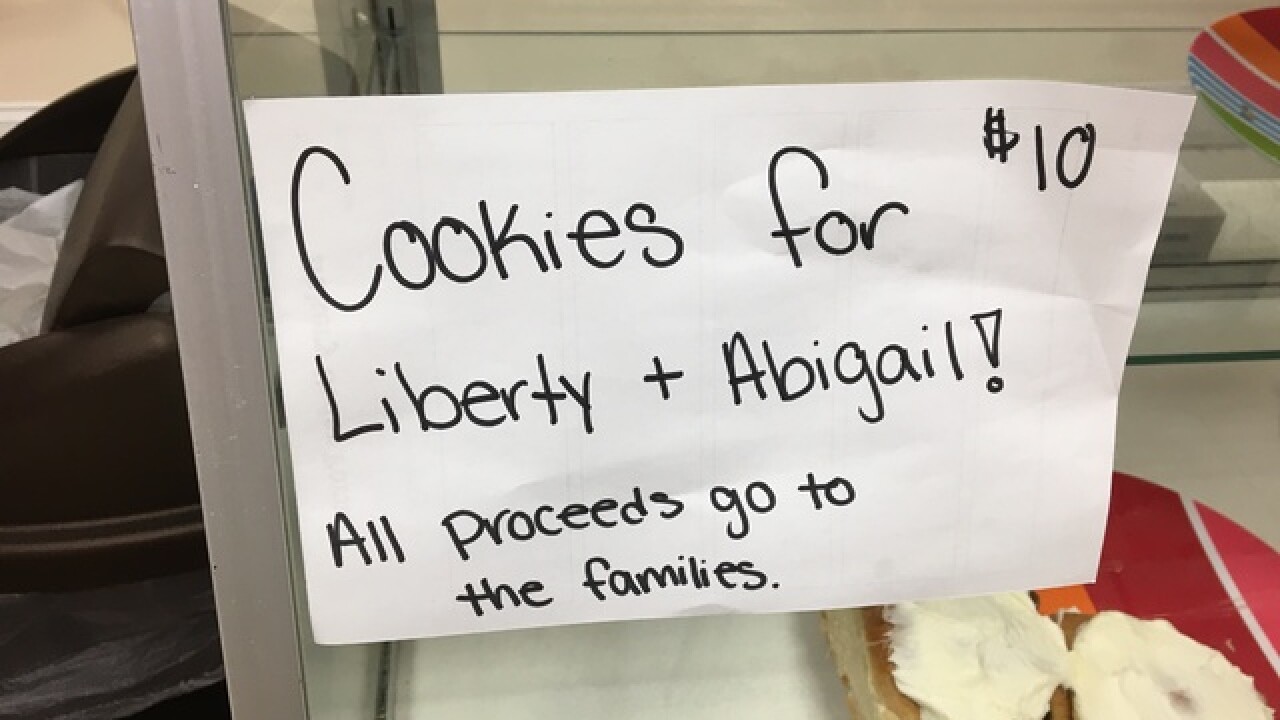 Copyright 2017 Scripps Media, Inc. All rights reserved. This material may not be published, broadcast, rewritten, or redistributed.
<p>Saturday, February 18: Several Delphi businesses began <a href="http://www.theindychannel.com/news/more-delphi-businesses-hold-fundraisers-for-families-of-murdered-teens">hosting fundraisers in their neighborhood</a> with proceeds benefiting the families of the teens.</p> DELPHI, Ind. – Three days after authorities positively identified the two bodies found in Delphi, IN as teens Abigail Williams and Liberty German, the community has continued to rally behind the families impacted by the tragic incident.

On Friday, George Mendel, owner of Hometown Shirts and Graphix, announced the store would sell a special T-shirt design, with the help of family, to honor Williams and German.

Now, several other businesses have joined in.

On Feb. 24 Delphi Pizza King will hold a benefit fundraiser from 11 a.m. – 10 p.m. with proceeds going to the teens’ families.

A sign placed on the door of the restaurant states, “In our community, when bad happens, we ban together.”

“These families are our friends, our neighbors and have a hard road ahead of them. They will be in need of prayers, financial needs and just the respect knowing our community is here for them when we need to be. We invite everyone in our community and surrounding communities to come and help our efforts to assist these families.” “We are a very close knit small community so this hits very hard, even though it’s a family that doesn’t deserve this,” said Tracy Martin, co-owner of Pizza King. “It could be anyone, it just hurts. It’s very emotional and sad.”

“I can’t express it and it just fills my heart because that’s what small communities do,” said bakery employee, Sharon Herron. “It’s family and you reach out to one another in love.”

The morning of Feb. 18 brought more than 3,000 people to the city of Delphi for a motorcycle benefit ride.

“This is totally overwhelming, a lot more (people) than what we expected,” said Bruce Wilson, who helped organize the event. “We were guessing maybe 600 people and we’ve got right over 3,000. For this community to come together like it has, it’s amazing.”

Organizers said they are unsure about how much money was raised, but they were pleased with the outcome.

Delphi business selling t-shirts to honor murdered teens, support family | ISP on Delphi murders: "Everyone is a suspect" | Search warrant served at Delphi home in connection to teen murders, no arrests made | Public events scheduled to honor the lives of murdered teens, help their families | Friend of killed Delphi girl: ‘I question everything’ | State Police say an Amber Alert would not have done ‘any good’ | A look at the property where the bodies of two missing teen girls were found | ISP wants to speak to this man and anyone who was near Delphi trail when two teens went missing | Community in shock after bodies of two missing teens found | Community concerned about safety as police search for suspect in death of teens | MAP: Where the two bodies of the teen girls were found near Delphi, Indiana | Why wasn’t an Amber Alert issued when girls were reported missing in Carroll County? | Delphi Timeline: Teen girls found dead after disappearing while hiking |Two bodies found during search for Carroll County teens | MISSING: Two 13-year-old girls dropped off to go hiking near Carroll County trail