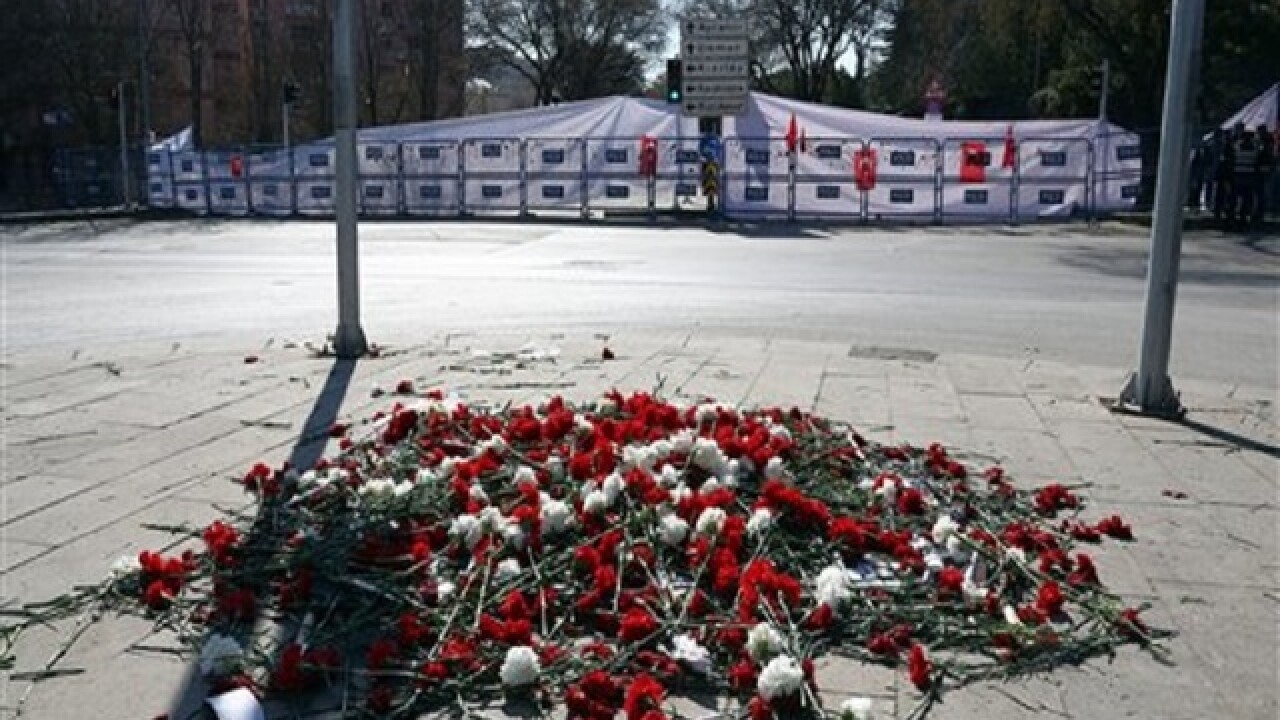 Burhan Ozbilici
<p>Carnations are left at the site of Wednesday's explosion in Ankara, Turkey, Monday, Feb. 22, 2016. Turkey's state-run agency says a court has charged 14 people in connection with last week's deadly suicide car bombing in Ankara and ordered them jailed pending trial. Anadolu Agency says Monday the suspects aiding a terror organization, forging official documents and fraud. It was not immediately clear what part they had in the attack on Feb. 17, which targeted buses carrying military personnel and killed 28 people.(AP Photo/Burhan Ozbilici)</p>

ANKARA, Turkey (AP) — Kurdish rebels on Friday detonated a car bomb near a police station in southeastern Turkey, killing two police officers and seriously wounding at least four people, the state-run Anadolu Agency reported.
The attack targeted the traffic police station and lodgings in the town of Nusaybin, bordering Syria, where the security forces are battling militants linked to the Kurdistan Workers' Party, or PKK.
A fragile two-year-old peace process between Turkey's government and the PKK collapsed in July, reviving a three-decades-old conflict that has killed tens of thousands of people. Hundreds — many of them police and soldiers — have died in the renewed fighting.
The agency says the four wounded people are in serious condition.
The explosion caused extensive damage to the police lodgings and left a large crater on the road, images published by the private Dogan news agency showed.
The PKK, considered a terror organization by Turkey and its allies, is fighting for autonomy in Turkey's mostly Kurdish southeast.
The attack in Nusaybin comes amid a surge of violence in Turkey.
Last month, a suicide car bombing that targeted buses carrying military personnel in the capital, Ankara, killed 29 people. A Kurdish militant group that is an offshoot of the PKK claimed responsibility for that attack.
On Thursday, police in Istanbul killed two women militants of the banned far-left group, the Revolutionary People's Liberation Army-Front, or DHKP-C, who had hidden inside a building after attacking police with gunfire and a hand grenade.
Some 145 people have died since July in three separate suicide bomb attacks that authorities have blamed on the Islamic State group, including 12 German tourists who were killed in Istanbul's historic Sultanahmet district on Jan. 12.
Associated Press 2016