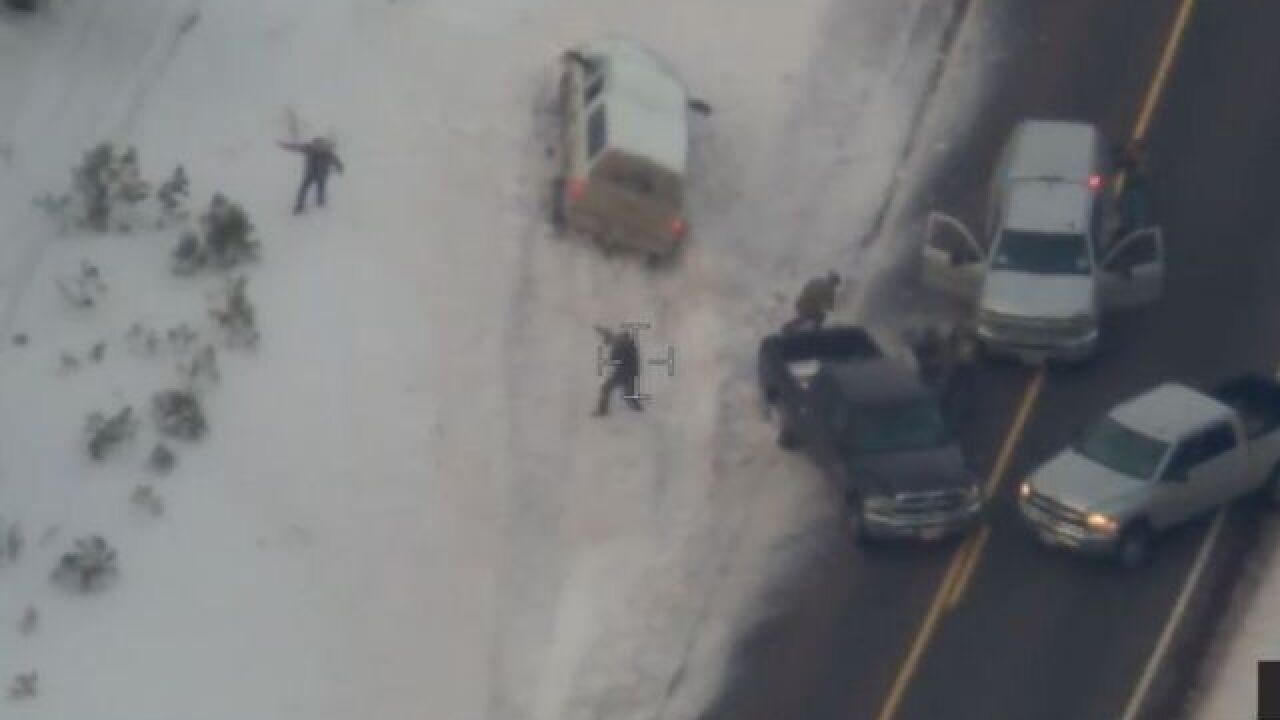 PORTLAND, Ore. (AP) — The four remaining occupiers at an Oregon wildlife refuge are facing charges, according to court documents released Thursday that say more than a dozen armed activists threatened violence against federal authorities and used social media to urge others to join them.

A newly unsealed indictment names 16 defendants, including the holdouts, standoff leader Ammon Bundy and other occupiers arrested last week. Also named is Kenneth Medenbach, who was arrested after being caught driving a government vehicle from the refuge to a supermarket.

A federal grand jury charged all with felony conspiracy, accusing them of using intimidation to prevent federal officers from doing their work at Malheur National Wildlife Refuge.

The holdouts at the refuge have said they are not leaving without a guarantee they won't be arrested. If they stay true to their word, the indictment buries any chance they will surrender on their own.

The U.S. Attorney's Office and the FBI declined comment Thursday, but the lack of movement in recent days indicates negotiators were not offering amnesty.

The remaining occupiers are: David Fry, 27, of Blanchester, Ohio; Jeff Banta, 46, of Elko, Nevada; and Sean Anderson, 48, and Sandy Anderson, 47, a married couple from Riggins, Idaho.

The standoff began Jan. 2, with the group demanding the federal government turn public lands over to local control and free two ranchers imprisoned for setting fires.

Two conspirators traveled to the sparsely populated area of southeastern Oregon last October to warn the local sheriff of "extreme civil unrest" if certain demands were not met, according to the indictment.

Once the occupation began, the group brandished firearms to keep officials from carrying out their duties, threatened violence and intimidated locals "to effectuate the goals of the conspiracy," the documents say.

Defense attorneys have said at court hearings that their clients engaged in civil disobedience and are being punished for political speech. They say the only use of force during the standoff was by police, who shot and killed Arizona rancher Robert "LaVoy" Finicum during a Jan. 26 traffic stop.

Finicum's death led to protests this week by those supporting the occupation, while local residents rallied to urge the holdouts to leave, further dividing the strained community.

Federal authorities fear those tensions could pop up elsewhere and have increased security at national wildlife refuges in southern Oregon, Northern California and Nevada and put the rest of the preserves nationwide on heightened alert.

"No specific threats or incidents have occurred, but we remain vigilant to ensure employee and visitor safety throughout the region," Jody Holzworth, a Sacramento-based regional spokeswoman for the U.S. Fish and Wildlife Service, said in an email Wednesday.

Preserves and other national sites run by the Fish and Wildlife Service are being extra vigilant, said Gavin Shire, the agency's chief of public affairs.

"Due to the evolving situation in eastern Oregon, all service stations are on alert and being advised to take appropriate caution," Shire said in a statement.