At least 85 missing after landslide in China 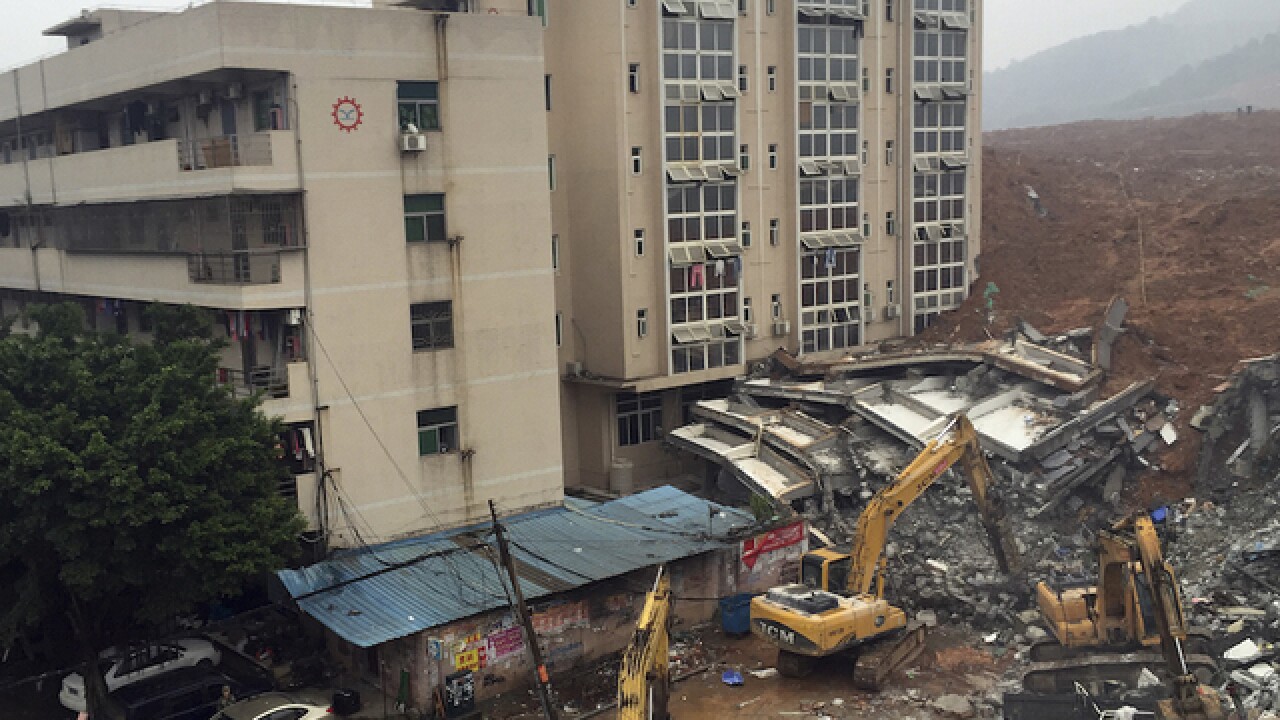 <p>Rescue workers search for survivors in the aftermath of a landslide in Shenzhen in southern China's Guangdong province Monday, Dec. 21, 2015. The massive landslide buried dozens of buildings when it swept through an industrial park in the southern Chinese city of Shenzhen.</p>

Rescuers searched Monday for 85 missing people a day after the collapse of a mountain of excavated soil and construction waste that had been piled up over two years in China's manufacturing center of Shenzhen.

Authorities said the landslide buried or damaged 33 buildings in the industrial park in Shenzhen, a city near Hong Kong that makes products used around the world ranging from cellphones to cars.

The Shenzhen government said seven trapped people had been rescued and 85 others remained missing Monday evening. Earlier in the day it had said 91 people were missing and seven rescued, but it gave no explanation for the change in the missing. No deaths had been reported.

The landslide is the fourth major disaster to strike China in a year following a deadly New Year's Eve stampede in Shanghai, the capsizing of a cruise ship in the Yangtze River and a massive explosion at a chemicals warehouse in Tianjin on the coast near Beijing.

Human error has been suspected or confirmed in all three previous disasters, pointing to an often callous attitude toward safety in China despite the threat of harsh penalties.

In Sunday's landslide, the Ministry of Land and Resources said a steep man-made mountain of dirt, cement chunks and other construction waste had been piled up against a 100-meter (330-foot) -high hill over the past two years.

Heavy rains in the region saturated the soil, making it heavy and unstable, and ultimately causing it to collapse with massive force.

"The pile was too big, the pile was too steep, leading to instability and collapse," the ministry said, adding that the original, natural hill remained intact.

"If the government had taken proper measures in the first place, we would not have had this problem," said Chen Chengli.

Aerial photos from the microblog of the Public Security Ministry's Firefighting Bureau showed the area awash in a sea of red mud, with buildings either knocked on their side or collapsed entirely.

Posts on the microblog said the mud had filled many of the buildings, leaving the "room of survival extremely small."

Cellphone camera video of the disaster on state broadcaster CCTV showed a massive wall of debris slamming into the buildings and sending up huge plumes of dust.

A man who runs a store selling cigarettes and alcohol less than a kilometer (a half mile) from the site said local residents had known that the pile of soil was dangerous and feared something bad would happen.

"We heard a sound like an explosion and then all we saw was smoke," said the man, who gave only his surname, Dong. "We knew what had happened immediately."

The Ministry of Land and Resources said it had dispatched personnel to help guard against a second collapse.

The Shenzhen government said 600 people had been relocated.

Nearly 3,000 people were involved in the rescue efforts, aided by 151 cranes, backhoes and other construction equipment, along with rescue dogs and specialized life-detecting equipment.

The initial landslide sparked an explosion in a gas pipeline owned by PetroChina, the country's top oil and gas producer. By Monday morning, the fire was extinguished and a temporary section of pipe was being laid.

Three decades of headlong economic growth have been catching up with China in terms of safety and damage to the environment. Many of the country's major cities suffer from chronic air pollution. A four-day smog red alert continued in Beijing on Monday, forcing schools to close, factories to curtail production and half the city's cars off the roads.