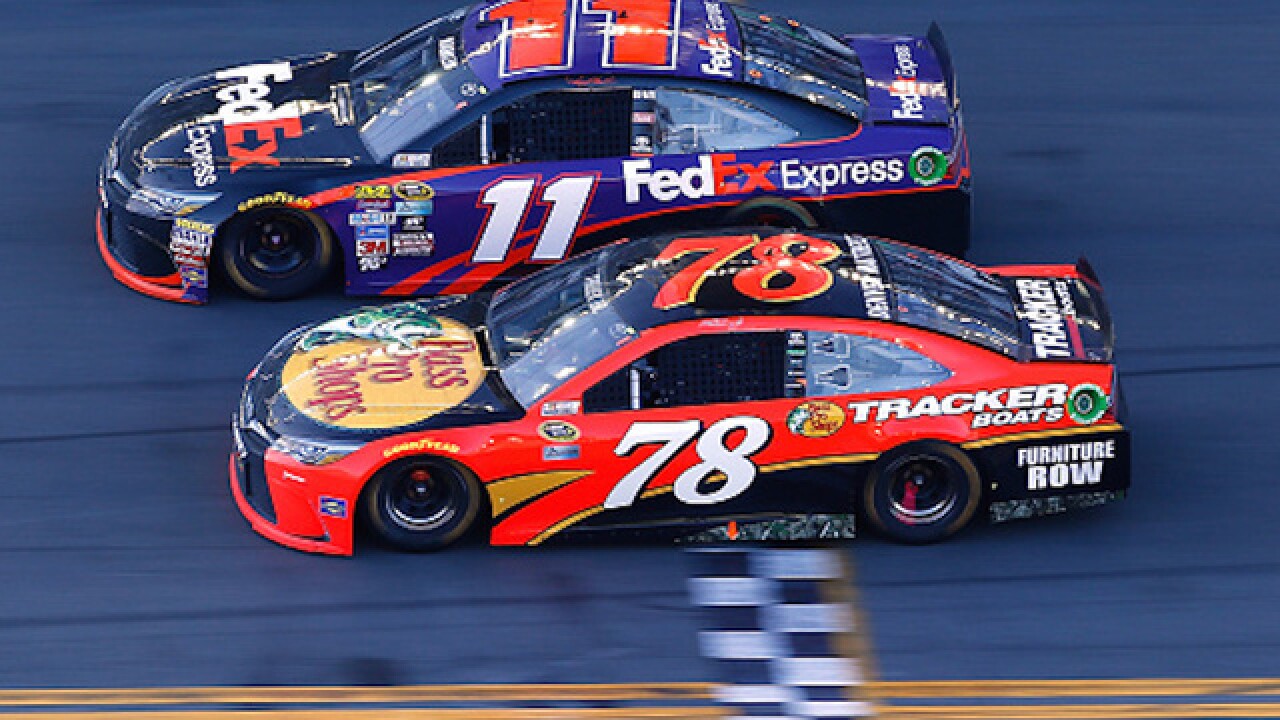 CHARLOTTE, N.C. (AP) — When Brian France endorsed Donald Trump for president, the chairman and chief executive of NASCAR thought of it as nothing more than a "routine endorsement."
He's been dealing with the fallout ever since.
France's decision to personally back the front-runner for the Republican nomination has roiled a sport his family built from the ground up. It's threatened a decade of work to broaden NASCAR's appeal among minorities, upset one of the most powerful teams in the sport and risked a break with the corporate sponsors that are its financial lifeblood.
"I was frankly, very surprised, that my diversity efforts for my whole career would have been called into question, over this, in my view, a routine endorsement," France said Wednesday in an interview with The Associated Press.
France acknowledged he's had to have conversations with sponsors since making the endorsement, which came as NASCAR is seeking a new main sponsor for its top series.
"I made a few phone calls and clarified some things," he said. "That kind of goes with the territory."
France's appearance at a Trump rally the day before last week's Super Tuesday elections fits with the sport's history of occasionally blending politics with the action at the track. France's grandfather, NASCAR founder Bill France Sr., endorsed George Wallace for president. Its all-time winningest driver, Richard Petty, celebrated his 200th victory with President Ronald Reagan and ran for statewide office in North Carolina in the 1990s.
France told the AP on Wednesday he backed Barack Obama in 2008 and actively participated in the campaign, shifting his support to Mitt Romney four years later.
"I supported Obama. I went to his rallies. I parted with my hard-earned money. There was a movement going on, and I was really thrilled with the idea of the first African-American president," he said. "I did the same for Mitt Romney. In both of those cases, I have never agreed with all of their policies."
But Trump is a candidate unlike any other in recent memory, drawing intense criticism for the racial undertones of his rhetoric and policies. The billionaire has called immigrants from Mexico rapists and drug dealers, has vowed to forcibly deport the 11 million people living in the country illegally and seeks to temporarily bar Muslims from entering the U.S.
Trump has also earned the explicit or implicit backing of a slew of white nationalist leaders, including former Ku Klux Klan leader David Duke. Mexican President Enrique Pena Nieto has compared his language to that of Adolf Hitler and Benito Mussolini.
It's into that cauldron that France inserted himself and his sport — admittedly without knowing all of what Trump has proposed. "I don't even know all their policies, truthfully," France said. He said he likes Trump's "business approach" and his status as a Washington outsider. He also cited the electricity around the Trump campaign and a friendship with one of Trump's sons, Donald Trump Jr., that dates back nearly two decades.
"I'm not supporting him for all of his views, or his immigration views," France said. "I happen to be very enamored by the excitement he's brought and the voter turnout that it is creating."
France also is trying to protect his record on diversity. He said NASCAR has spent "tens of millions of dollars" on a program aimed at boosting the participation of minorities in the sport. That program includes Japanese-American driver Kyle Larson, who competes in the top-level Sprint Cup, and Darrell Wallace Jr., a driver in the second-tier Xfinity Series who is black and who came up through NASCAR's diversity program.
France's efforts to quell criticism over what he insists was a "personal and private" decision have also been complicated by Trump's continued mentioning of how he's received "NASCAR's endorsement."
On Monday, at a North Carolina campaign rally not far from Charlotte Motor Speedway and the headquarters of many top NASCAR teams, Trump was ebullient in describing his backing from the sport. "You know, I just had a visitor backstage. NASCAR endorsed Trump, can you believe that?" he asked the crowd.
Except it wasn't NASCAR that made the endorsement. It was France.
"We talked to the campaign about the endorsement that I made, versus the sport, and it's hard to get that perfectly right all the time," France said.
Hope Hicks, a spokeswoman for Trump's campaign, said in a statement that he spoke broadly because the "endorsement is from the great Brian France, in addition to several NASCAR drivers."
In a company-wide email sent last week to all his employees, France reiterated that NASCAR has never had a policy prohibiting employees or competitors from participating in politics, but said that could change in the future.
He told the AP on Wednesday he understands that his endorsement can be viewed as one that comes from NASCAR itself.
"I understand that the family is closely linked with NASCAR. ... We've just always, you've seen politicians come to tracks, and it varies, some Democrats, some are Republicans, all have policies we do and don't agree with," he said.
Associated Press 2016