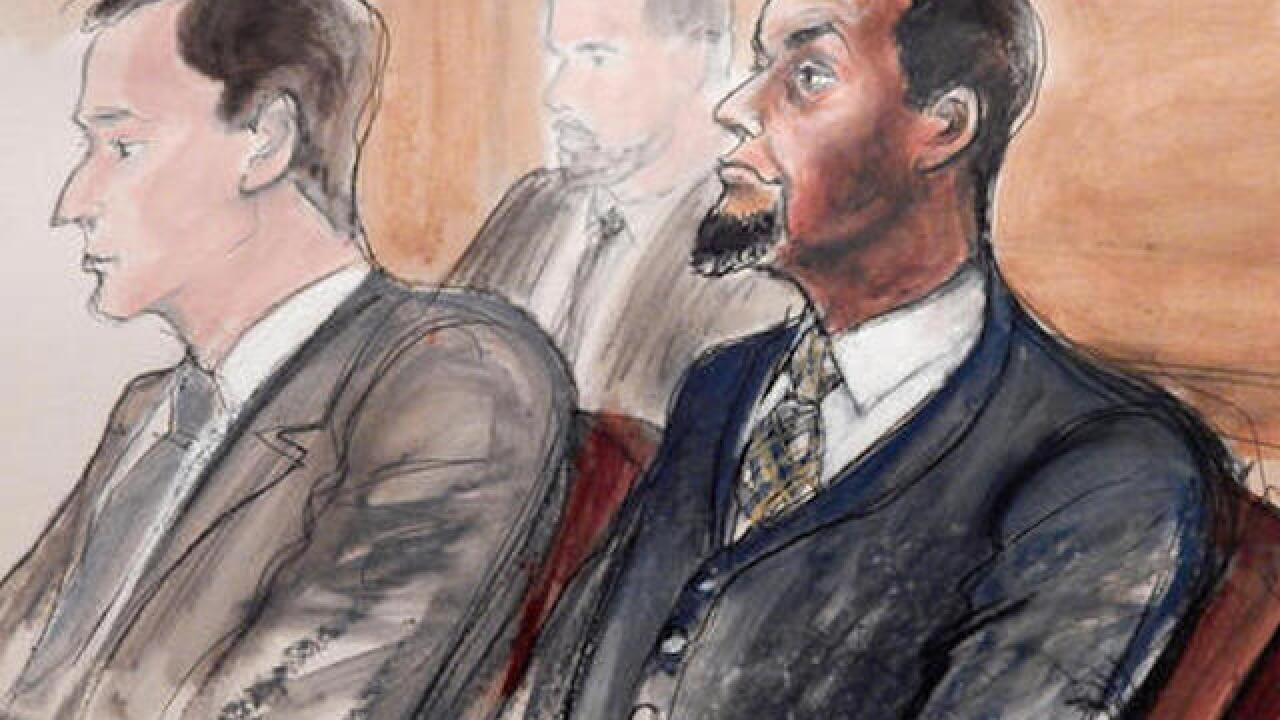 Elizabeth Williams
<p>FILE - In this Feb. 24, 2016, courtroom file sketch, Tairod Nathan Webster Pugh, right, sits at the defense table with his attorney Zachary S. Taylor, during jury selection in a federal court in the Brooklyn borough of New York. Pugh, a U.S. Air Force veteran and former airplane mechanic charged with trying to join the Islamic State group, was convicted by the jury Wednesday, March 9, 2016. It was the first verdict to result from more than 70 cases the government has brought against U.S. citizens accused of trying to support the militant group. (AP Photo/Elizabeth Williams, File)</p>

NEW YORK (AP) — A U.S. Air Force veteran was convicted Wednesday of terrorism charges for attempting to join the Islamic State group and die a martyr, the first verdict from more than 70 cases the government has brought against Americans accused of trying to support the militant group.

An anonymous jury in Brooklyn began deliberations Tuesday afternoon in the case against 48-year-old Tairod Pugh, of Neptune, New Jersey. He was convicted of attempting to provide material support to terrorists and obstruction of an official proceeding.

"I think he's sad," Pugh's attorney, Eric Creizman, said as he left the courthouse. "I feel bad for his family."

"Right now it's just disappointing," he said of the verdict. "This was an interesting case in that there was no direct evidence — everything was circumstantial."

Prosecutors said Pugh was stopped at a Turkish airport in January 2015 carrying a laptop with information on Turkey-Syria border crossing points, 180 jihadist propaganda videos, including footage of an Islamic State prisoner beheading, and a letter declaring: "I will use the talents and skills given to me by Allah to establish and defend the Islamic States."

During the trial, prosecutors showed jurors materials found on Pugh's computer and cited a letter Pugh wrote to his wife saying, in part: "There is only two possible outcomes for me: Victory or martyr."

Prosecutors said he flew there so he could find a route into Syria and join the Islamic State group. He was forced by authorities to turn back and was arrested soon after his return on a flight to New York City. Pugh was in the Air Force from 1986 to 1990, when he was trained to install and maintain aircraft engines and navigation and weapons systems.

During closing arguments Tuesday, Creizman insisted Pugh had no ill intent when he went to Turkey a month after losing his job as an aviation mechanic and telling his supervisor to stop "talking to me like I'm an idiot." He said Pugh had hoped to move to the Middle East with his wife.

He said his client was feeling small and inconsequential when he started researching the rise of the Islamic State group in the summer of 2014, impressed that Muslims somewhere were trying to establish a country and wouldn't "back down from anything."

"This is a fantasy," Creizman told jurors of Pugh's social media posts that seemed supportive of radical Islamists.

He said his client had always talked about Middle East politics and liked to research the subject online, but he noted that many of the articles he read were written by mainstream news organizations, including some critical of the militants.

Still, he acknowledged that Pugh had opinions some might find offensive and Pugh believed some of the Islamic State group's atrocities were a media creation.

Other defendants have pleaded guilty to charges of trying to support the Islamic State group, but the verdict "further demonstrates our commitment to bring justice to all those who seek to provide material support to terrorists," said John Carlin, Assistant Attorney General for National Security.

U.S. Attorney Robert L. Capers said the verdict "provides yet another example of a successful outcome in our national security effort and demonstrates the crucial role that law enforcement action plays in that effort."

In her closing, Assistant U.S. Attorney Tiana Demas urged jurors to follow the trail of Pugh's Internet research to discover that he went to Turkey to find a way to sneak into Syria and join the Islamic State group.

She showed jurors an image from Pugh's computer that showed areas controlled by the Islamic State group and said: "This map shows a lot about his intent in Turkey."

Prosecutors told jurors that Pugh destroyed four computer flash drives when he realized he was being scrutinized by authorities.