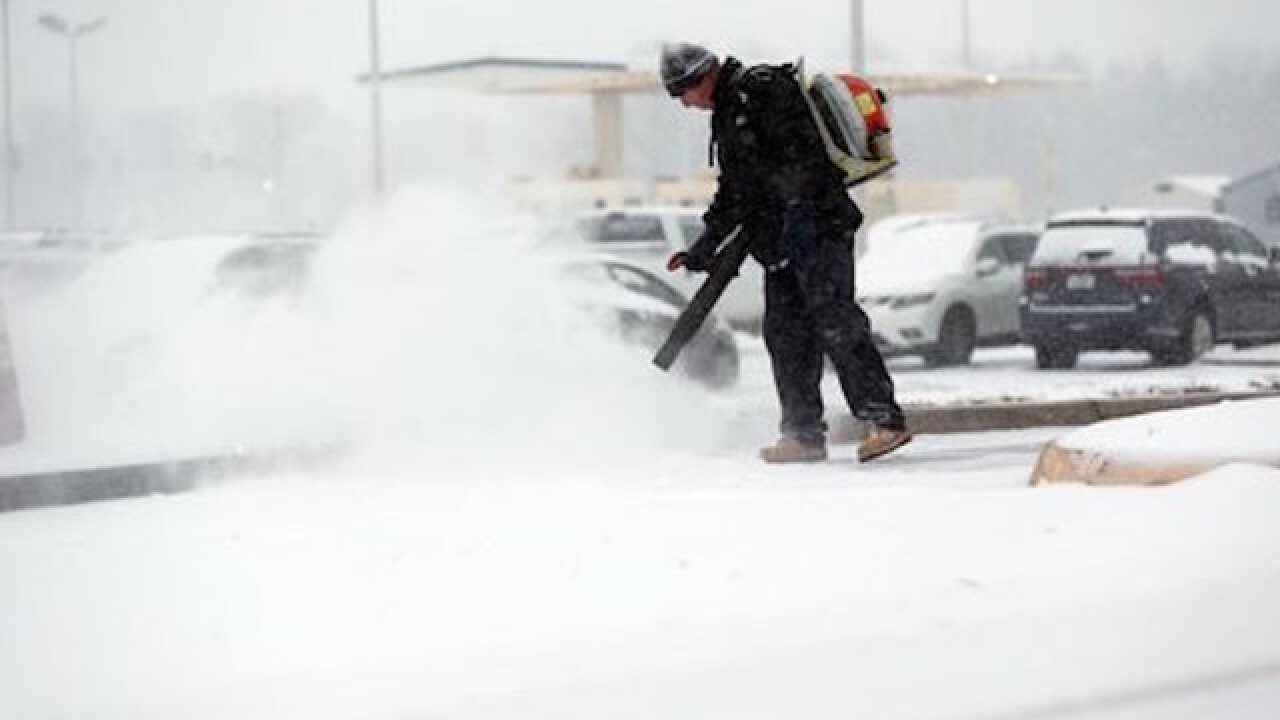 Copyright Associated Press
Stephanie Klein-Davis
<p>George Morris, with Standard Parking, works on clearing an entrance to airport parking as snow falls Friday morning, Jan. 22, 2016, in Roanoke, Va. Airlines have canceled more than 2,700 flights Friday to, from or within the U.S., as a blizzard swings up the East Coast, according to flight tracking service FlightAware. (Stephanie Klein-Davis/The Roanoke Times via AP)</p>

NEW YORK (AP) — Airlines canceled around 6,600 flights to, from or within the U.S. for Friday and Saturday, as a blizzard began covering much of the Eastern U.S.

The bulk of Friday's 3,000 cancelations are in Charlotte and Raleigh, North Carolina, according to flight tracking service FlightAware. Another 3,600 flights were canceled for Saturday. Those cancelations center on Philadelphia, Washington, and New York, with airlines essentially shutting down all flights into those cities.

By Sunday afternoon, however, the airlines hope to be back to a full schedule to handle the typical influx of business travelers heading out to start a week on the road.

Overall, the airlines have canceled about 13 percent of their scheduled flights in the U.S. for Friday and Saturday.

One bit of good news: Saturday is the slowest travel day of the week. There are a little more than 22,000 flights scheduled to, from or within the U.S., according to FlightAware. That's about 5,000 fewer flights — and 400,000 fewer passengers — than on Thursday or Friday.

All major airlines have issued waivers for travel over the weekend, allowing passengers to rebook onto earlier or later flights to avoid the storms. The airports included vary by airline but include some cities in Kentucky, Tennessee and West Virginia all the way up the coast to New Hampshire and Massachusetts. American Airlines alone has issued waivers for 42 airports.

For those looking to instead cancel their trips, they need to wait until the airline officially cancels their flight. Airlines have been much more proactive in recent years about canceling flights, often doing so up to a day in advance. More travelers are impacted but they aren't stuck waiting in airports. It also lets airlines restart the system quicker because they have planes and crews in place.

If your flight is canceled and maybe you are stuck at the airport, consider taking these actions:

— If your flight is canceled — and you are at the airport — get in line to speak to a customer service representative. But also call the airline directly. If the phone lines are jammed, try the airline's overseas numbers. You'll pay long-distance rates, but might not have to wait. (Put those numbers in your phone now.) Finally, consider sending a tweet to the airline.

— There are more to airline lounges than free drinks and lights snacks. The real secret to the lounges is that the airline staffs them with some of its best — and friendliest — ticket agents. The lines are shorter and these agents are magically able to find empty seats. So consider buying a one-day pass. It typically costs $50 but discounts can sometimes be found in advance online.

— If weather causes cancellations, use apps like HotelTonight and Priceline to find last-minute hotel discounts for that night. Warning: Many of the rooms are nonrefundable when booked, so lock in only once you are stuck.