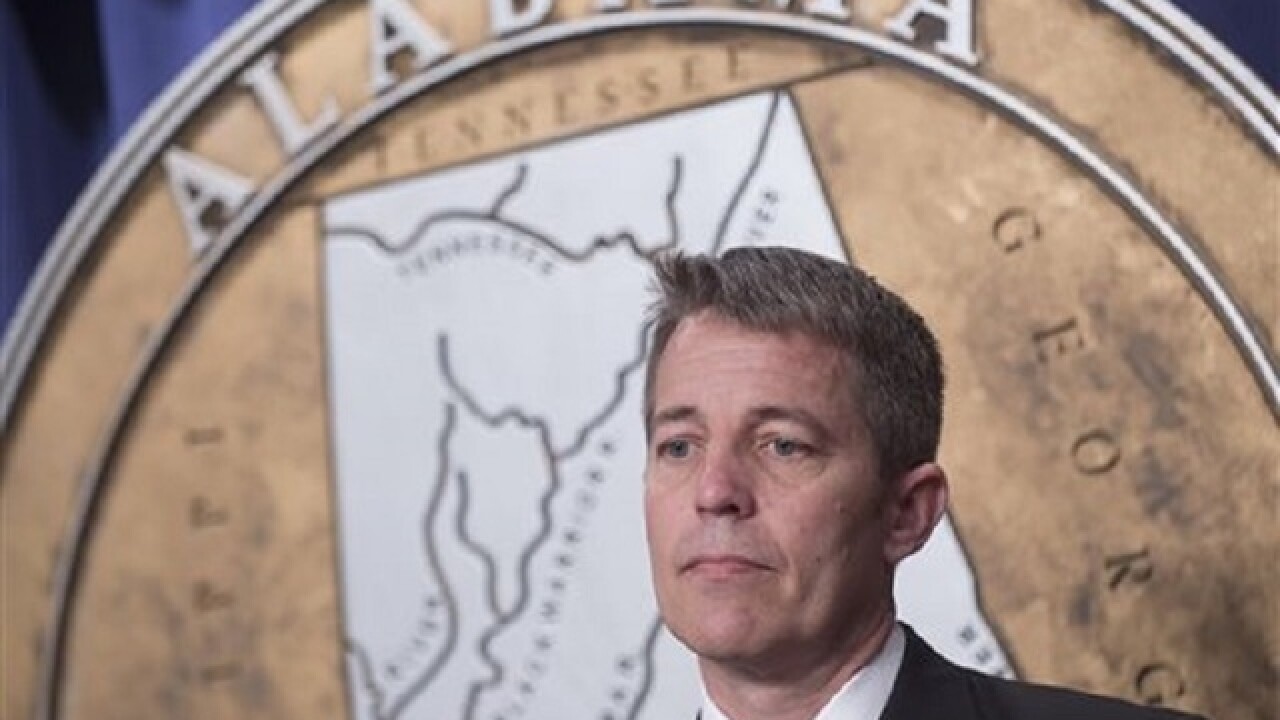 By: Associated Press
Posted at 12:08 AM, Apr 06, 2016
MONTGOMERY, Ala. (AP) — Alabama Gov. Robert Bentley was hit Tuesday with a longshot impeachment effort in the wake of a scandal involving a former top aide, the latest sign of his growing political troubles.
Republican Rep. Ed Henry introduced the articles of impeachment, saying lawmakers and voters have lost confidence in the two-term GOP governor. He accused the governor of moral turpitude, willful neglect of duty, corruption and incompetence.
"We are looking at this governor who has essentially betrayed the trust of the people of Alabama through actions and lies that have caused us to have some doubt about his leadership," Henry said during a press conference at the Alabama Statehouse.
Bentley last month admitted making inappropriate remarks to his senior political adviser, Rebekah Caldwell Mason, who has since resigned. The admission came after Bentley's recently fired law enforcement secretary accused the governor of having an affair with Mason and of interfering with law enforcement investigations. Bentley has denied both accusations.
The troubled governor lashed out at the effort, saying he would vigorously defend himself.
"Today's press conference is nothing more than political grandstanding intended to grab headlines and take the focus away from the important issues the Legislature still has to address before the end of the session," Bentley said in a statement. Henry and Bentley have clashed on past issues, including the governor's 2015 push to raise taxes that some Republicans saw as a betrayal.
The state Constitution spells out a vague but seldom-used procedure for impeachment. Alabama lawmakers have never previously tried to impeach a sitting governor.
The impeachment resolution, which has support from some Democrats including House Minority Leader Craig Ford, was sent to the House Rules Committee for consideration but faces stark odds of being voted on by the full chamber. At least one legislative leader said that would not happen in the 11 meeting days remaining in the current session.
House Rules Committee Chairman Mac McCutcheon said the committee would first establish an investigating commission to vet the articles of impeachment and determine if grounds exist for impeachment. He said that likely wouldn't be resolved before the session ends next month.
The scandal has engulfed Bentley, a mild-mannered dermatologist and former Baptist deacon whose political ascendency was based partly on his morally upright, honest reputation. Dianne Bentley, the governor's ex-wife, filed for divorce in 2015, saying their 50-year marriage had suffered an irreparable breakdown.
Recordings obtained by The Associated Press purportedly show the governor — before his divorce — professing love to someone named Rebecca or Rebekah and telling her how much he enjoyed kissing her and touching her breasts.
"I love you so much; I worry about loving you so much," Bentley says on the call.
The governor in a press conference last month said that he did not have a "physical affair" with Mason and that there was no "sexual activity."
Henry said the recordings cast doubt on Bentley's version.
Mason played a key role in Bentley's administration but was not on state payroll. She was paid with the governor's leftover campaign funds and also did work for a nonprofit organization formed to promote Bentley's agenda.
Some Alabama lawmakers quickly dismissed the impeachment effort.
"I'm not in the mood to impeach someone over personal issues. Unless someone can show us a reason, that someone has misused their office or misused tax dollars, and I haven't seen that," said Senate President Pro Tem Del Marsh, the GOP's leader in the chamber.
Still, the impeachment effort is indicative of Bentley's transition from lame duck to political punching bag as he spars with lawmakers over budgets and prison policy.
Republican Rep. Will Ainsworth said Bentley needed to be held to the same standard as other government employees.
"Could someone else talk inappropriately or touch inappropriately someone that's in their chain of command and not get fired? I think the answer is no, and I think that's the big problem we have to look at," Ainsworth said.
Ford said he did not care about the governor's personal matters, but he said he was concerned about the allegations that Bentley interfered with law enforcement business.
Bentley has a habit of saying in speeches how much he loves the people of his state. Henry said voters do not reciprocate the affection right now.
"If he truly loves the people of this state, he'll step down," Henry said.
Associated Press 2016