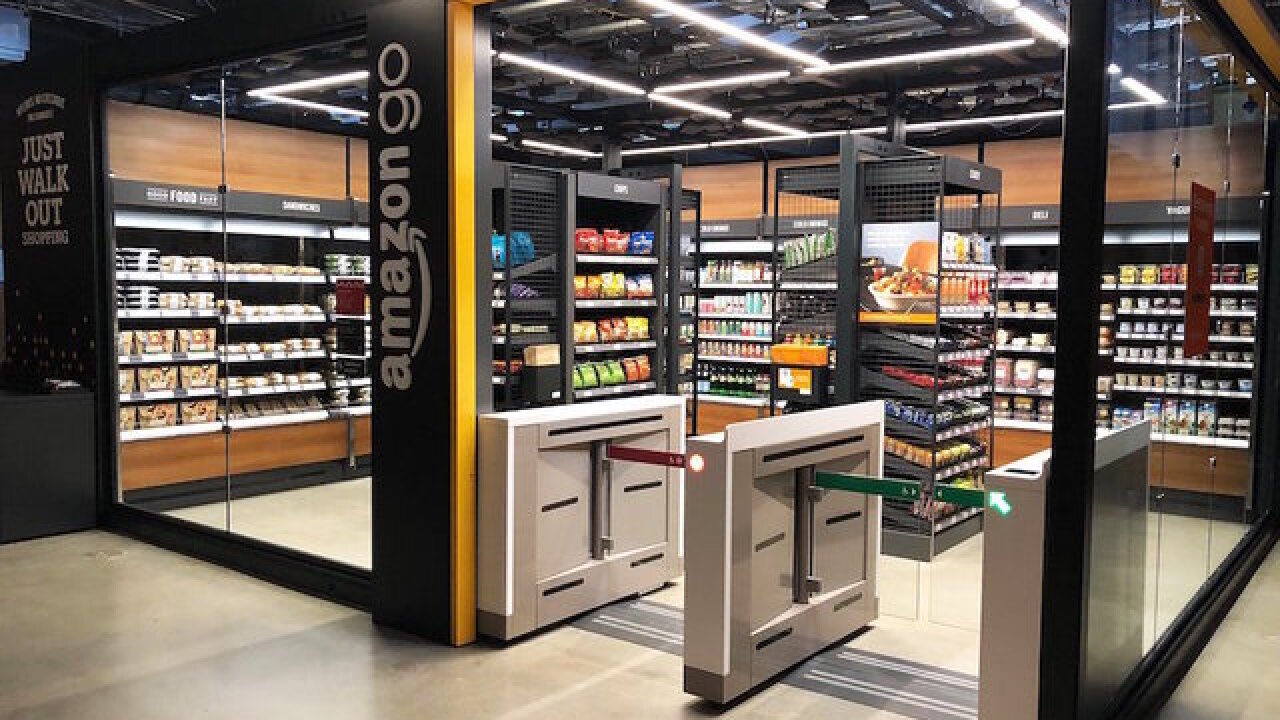 © 2018 Cable News Network, Inc.
Rachel Metz/CNN
<p>Over the past year, Amazon has opened seven of its Amazon Go stores to the public, ditching checkout lines for AI that tracks what customers want to buy. Now, the retailer is taking its cashier-free shops in a new, smaller direction.</p>

Over the past year, Amazon has opened seven of its Amazon Go stores to the public, ditching checkout lines for AI that tracks what customers want to buy. Now, the retailer is taking its cashier-free shops in a new, smaller direction.

On Wednesday, Amazon opened its first pint-sized Amazon Go store, which takes up about 450 square feet inside one of its Seattle offices — a fraction of other Amazon Go locations, which range from 1,800 to 2,000 square feet.

Amazon Go Vice President Gianna Puerini, who gave CNN Business a look around the store early this week, said the idea is to eventually bring them to places like office building lobbies and hospitals. Similar to the full-size stores, she said, they could go "anywhere where there's a lot of people who are hungry and in a rush."

Puerini wouldn't say when others will open, though she said she hopes they will crop up "soon." Such small stores could also help Amazon keep ahead of a handful of startups who are trying to convince existing retailers to buy their cashierless technology.

Unlike other Amazon Go stores — seven are open and two others are under construction — this one is not available to the general public. Only Amazon employees and guests can visit the store. The retailer took the same approach with its first Amazon Go store, which initially opened in 2016 just to employees. It's "just easier for us to experiment closer to home," Puerini said.

When CNN Business visited the new, small Amazon Go store, it was still hidden behind plywood and a black curtain. It looked very much like a regular Amazon Go store, but plopped in the middle of a common area in an Amazon office in downtown Seattle, right next to an employee café. (The office itself is above a much more traditional Macy's store.) This version of Amazon Go had just a few aisles, with shelves stocked full of cut fruit from Amazon-owned Whole Foods, yogurts, chocolate bars and more.

Though it's much smaller than the existing stand-alone Amazon Go stores, the technology behind this store is the same: after downloading an Amazon Go app, you scan an in-app code on an entry gate to get inside. Then a series of cameras above you work in concert with weight sensors on shelves and software to track the items you pick up and put down. As at all other Amazon Go stores, you walk out when you're done shopping, and the app emails you an itemized receipt.

The small stores could also allow Amazon to roll out more cashier-free locations faster than it could by simply opening stand-alone Amazon Go stores. The small stores are modular, Puerini said, and take only weeks to put together. That's much faster than it takes to open up a free-standing Amazon Go store, which the company said typically takes months.

The tiny shops could also be used to bring Amazon Go to a range of new markets, such as airports, which Amazon is reportedly considering for the AI-checkout stores. Puerini wouldn't confirm or deny whether Amazon is looking into opening Amazon Go stores of any size in airports, but said that, with many hungry people hurrying around, airports fit her "simple criteria" for the stores.

As with other Amazon Go stores, however, these won't be entirely self-sustaining. An employee will be needed to stock shelves when food arrives or clean up if a shopper, say, drops a glass Frappuccino bottle on the floor. The small, in-office location in Seattle will have set hours (it will be open from 7 am to 6 pm, Monday through Friday), and it will be staffed during that time, as the current Amazon Go stores are.

"People do still want help. They like to ask the associates, 'What's your favorite? What should I get?' Or they might want to make sure about ingredients on something," Puerini said. "There's still a lot of human interaction."