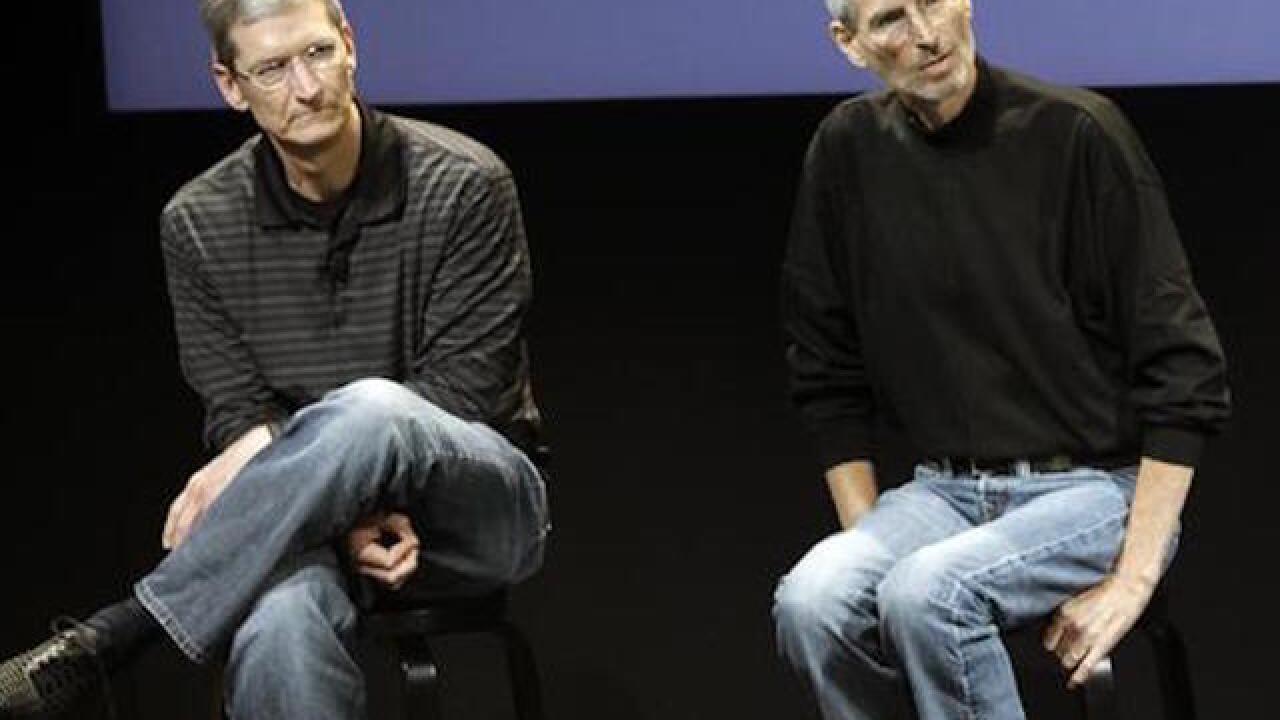 Copyright Associated Press
<p>This July 16, 2010, file photo shows Apple's Tim Cook, left, and Steve Jobs, right, during a meeting at Apple in Cupertino, Calif. Apple wants to encourage millions of iPhone owners to register as organ donors through a software update that will add an easy sign-up button to the health information app that comes installed on every smartphone the company makes. CEO Cook says he hopes the new software, set for limited release in early July 2016, will help ease a critical and longstanding donor shortage. (AP Photo/Paul Sakuma)</p>

SAN FRANCISCO (AP) — Apple wants to encourage millions of iPhone owners to register as organ donors through a software update that will add an easy sign-up button to the health information app that comes installed on every smartphone the company makes.

CEO Tim Cook says he hopes the new software, set for limited release this month, will help ease a critical and longstanding donor shortage. He said the problem hit home when his friend and former boss, Apple co-founder Steve Jobs, endured an "excruciating" wait for a liver transplant in 2009.

"Watching and seeing him every day, waiting and not knowing — it stuck with me and left an impression that I'll never forget," Cook told The Associated Press. Cook was so concerned that he offered to donate part of his own liver, although Jobs refused.

Jobs died of complications from pancreatic cancer in 2011, two years after receiving a liver transplant in Tennessee that was credited with extending his life. He enrolled in that state's registry after doctors advised him the lengthy waiting list in California meant he wouldn't live long enough to get one in his home state.

Now, donation advocates are hoping the new sign-up method will appeal especially to young adults who already use their smartphones for all kinds of online transactions.

"Younger Americans are not registering at the same rate as they have in the past," said David Fleming, chief executive of Donate Life America, a nonprofit national donation registry that's working with Apple.

More than 120,000 people in the United States are waiting for a life-saving organ transplant, Fleming said, while on average 22 die each day without receiving one.

Apple is adding the option to register with Donate Life by clicking a new button within the iPhone's Health app, which was introduced in 2014 as a tool for recording and managing a variety of health and fitness data. Another new button will link to information about organ donation. If a user registers as a donor, the app can add that fact to an optional "emergency information" display that can be seen when the phone is locked.

The software will come to all U.S.-based iPhones this fall when the company releases the next major update to Apple's mobile operating system, known as iOS 10. It's being released this week to software developers and soon after that to iPhone owners who have requested early access to a test version of iOS 10.

Apple Inc. isn't the first tech giant to embrace organ donation. Facebook added a feature in 2012 that lets members of the social network display their status as registered donors, and share links to registries in their states or countries. Johns Hopkins University researchers later reported the feature spurred thousands of new registrations, although the volume gradually fell from a one-day peak of 13,000.

Donate Life worked with Facebook on that project and has tried to improve on it, Fleming said. For example, there was no national donor registry when the Facebook feature was introduced, so users initially had to click through multiple links to sign up in their states. Donate Life now operates a national registry, which medical groups can search, along with individual state registries, to confirm whether a recently dead person had agreed to donate organs. The iPhone app lets users enroll directly with that national registry.

Several apps related to organ donation are available for competing Android phones, but Fleming suggested the iPhone app may be more effective because "you don't have to download something or do something additional to get access to it."

After Jobs received his transplant, health experts noted that most people can't afford to travel outside their home state for a new organ. Jobs lobbied in 2010 for a California law that encouraged more people to register as donors in his state, telling audiences that, "as a transplant recipient, I know how precious this gift of life is."

Cook said he hopes the iPhone app will bring "a substantial increase" in registrations, which in turn should "save lives and save people from that excruciating wait and wondering what's going to happen."