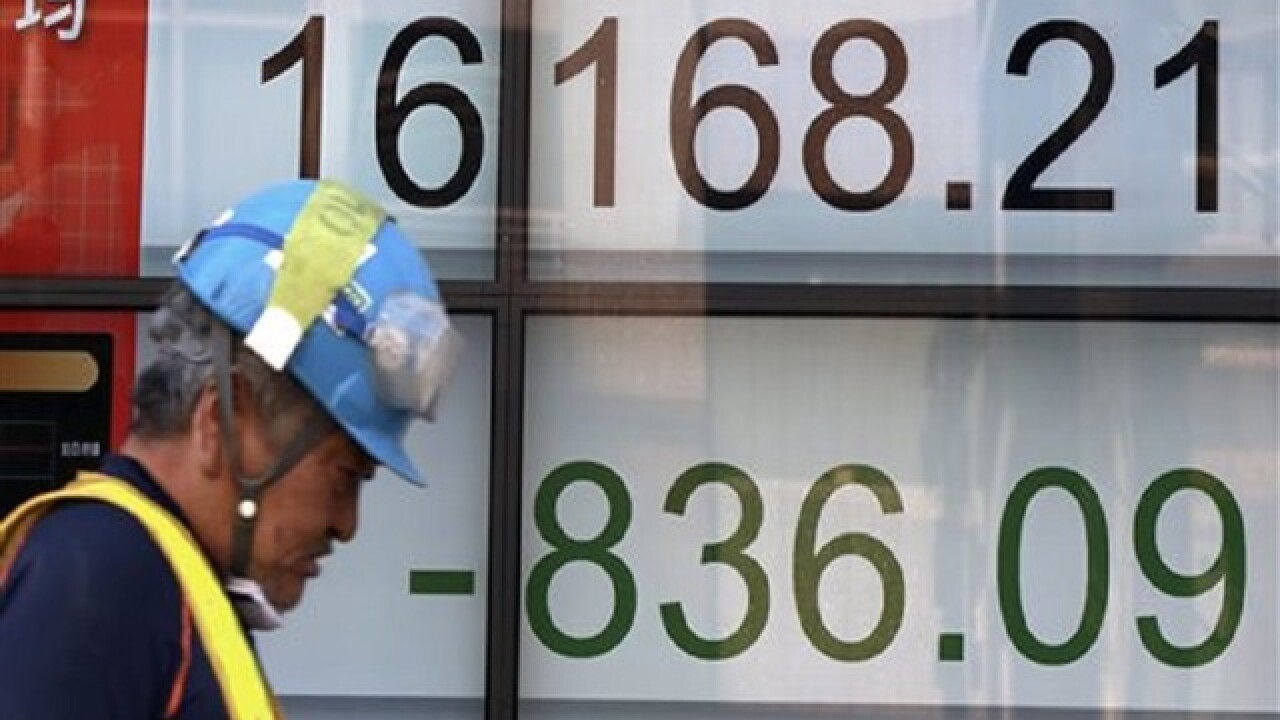 By: Associated Press
Posted at 2:19 AM, Feb 09, 2016
Asian markets tumbled Tuesday, led by a 5.4 percent slide in Tokyo, as renewed jitters about the global economy set off a wave of selling in banking stocks.
KEEPING SCORE: Japan's Nikkei 225 dived 5.4 percent to close at 16,085.44 and Australia's S&P/ASX 200 fell 2.9 percent to 4,832.10. Markets were down less severely in the Philippines, Indonesia, Thailand and New Zealand. China, Hong Kong, Taiwan and South Korea were closed for Lunar New Year holidays. Among banking stocks, National Bank of Australia retreated 4.8 percent in Sydney and Mizuho Financial sank 6.2 percent in Tokyo.
GLOBAL NERVES: Stock markets have been slump so far this year after a lackluster 2015. Several factors have kept investors in a selling mood, including falling crude oil prices, waning growth in major economies and the prospect of Federal Reserve rate hikes after several years of ultra-easy monetary policy. Tuesday's sell-off in Asia followed a wave of selling in Europe that was concentrated in bank stocks and the more financially shaky countries. The stock index in Spain was off roughly 4 percent, while Italy's lost about 5 percent. Greece's index sank about 8 percent.
THE QUOTE: "There is a genuine concern that stress in asset markets will start affecting real economics," said Chris Weston, chief market strategist at IG in Melbourne, Australia. "This period of sustained volatility and deterioration in credit will impact businesses and one has to be concerned about how many households are feeling this drawdown in the financial markets," he said in a market commentary.
WALL STREET: Wall Street rode another wave of selling Monday that sent U.S. stocks sharply lower, before a late-afternoon pullback stemmed some of the losses. The Dow fell 177.92 points, or 1.1 percent, to 16,027.05. The Standard & Poor's 500 lost 26.61 points, or 1.4 percent, to 1,853.44. The Nasdaq composite dropped 79.39 points, or 1.8 percent, to 4,283.75. The index is within 110 points of being in what Wall Street considers a bear market, or a 20 percent drop from its high.
ENERGY: Benchmark U.S. oil was up 23 cents at $29.91 a barrel in electronic trading on the New York Mercantile Exchange. The contract fell $1.20, or 3.9 percent, to close at $29.69 a barrel in New York on Monday. Brent crude was down 10 cents at $32.78 in London. The contract dropped $1.18, or 3.5 percent, to close at $32.88 a barrel in London.
CURRENCIES: The euro rose to $1.1208 from $1.1186 the day before. The dollar fell to 114.73 yen from 115.58 yen.
Associated Press 2016