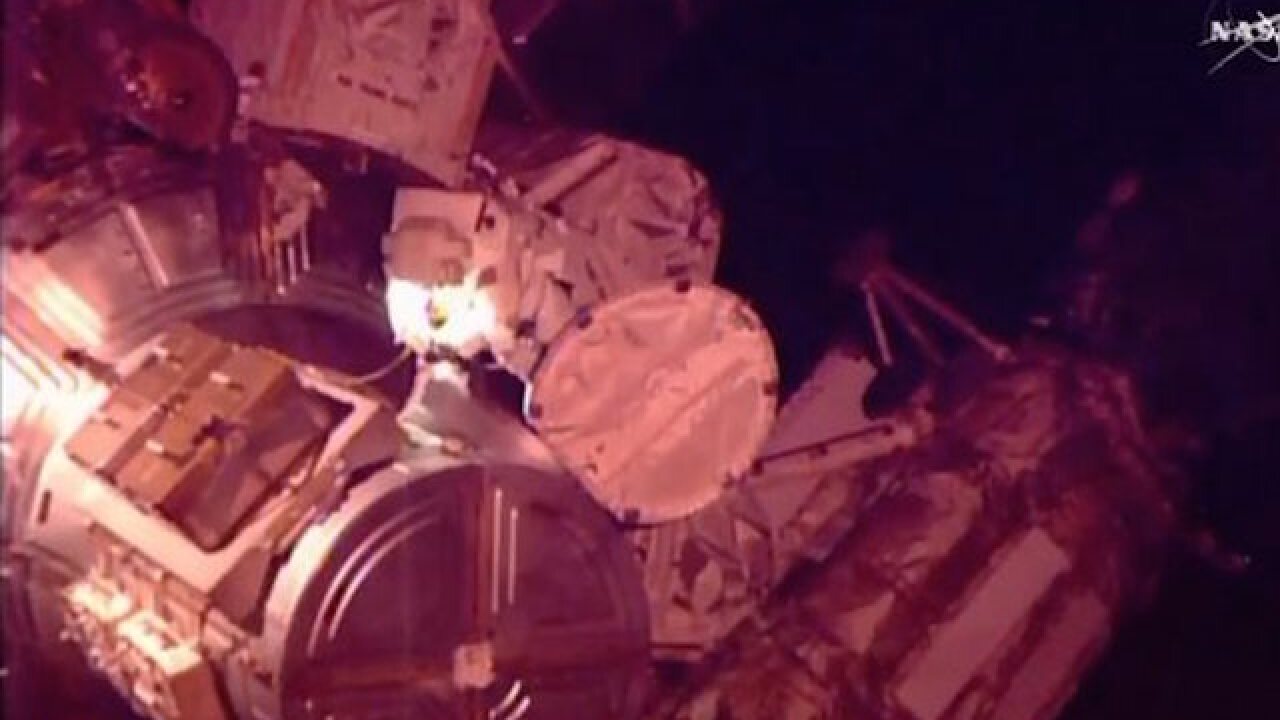 <p>In this photo provided by NASA-TV, American astronaut Scott Kelly returns to the International Space Station at the end of a spacewalk in which he and fellow American Timothy Kopra helped move a stalled rail car back into place outside the space station, on Monday, Dec. 21, 2015. (NASA TV via AP)</p>

ORLANDO, Fla. (AP) — Two American astronauts helped move a stalled rail car back into place outside the International Space Station on Monday, quickly finishing the primary job of an unplanned spacewalk before moving on to other housekeeping tasks.

NASA's one-year spaceman, Scott Kelly, and astronaut Timothy Kopra took just a little more than a half-hour to release brake handles on the rail car and help guide it 4 inches back into place. The rail car needed to be moved so a cargo ship filled with nearly 3 tons of food and supplies could dock at the orbiting space lab on Wednesday.

"I see motion!" Kelly said after the astronauts released the brake handles and a robotics officer in Mission Control sent a command to move the rail car.

"Good news! It appears to have reached the work site," astronaut Mike Hopkins in Mission Control told the spacewalkers a short time later.

The spacewalk more than 250 miles above Earth was just scheduled last Friday.

After engineers on the ground confirmed the rail car was latched in place, Hopkins told the spacewalkers, "It's in a good config. Well done!"

With their primary task completed, Kelly and Kopra split up to work on separate tasks of routing cables along the space station. Kopra also retrieved some tools stored on the side of the station for a future spacewalk.

Finished with their work, the astronauts returned inside the space station more than three hours after the start of their spacewalk.

Hopkins praised the astronauts for performing the spacewalk on such short notice.

"This is a team effort," Kelly said.

The Progress cargo ship filled with food and supplies launched from Kazakhstan about four hours before the spacewalk began.

It was the seventh spacewalk of the year.

Kelly is on a one-year mission that's due to end in March. Kopra arrived Tuesday, launching from Kazakhstan with Russian and British colleagues.